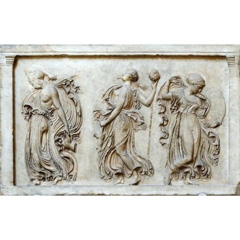 The campus community is invited to join the Grand Valley Classics Society for the 2nd Annual Festival of Dionysus, which honors an ancient festival of the same name.

“The festival was a major event in Athens, and we feel that this is a good way to connect to the past,” said Kendall Farkas, Classics Society president. “This event brings people together to educate them about the festival and to have a good time.”

The event will include Dionysus-themed bingo, a live performance of a scene from the Greek play, “The Eumenides,” with a modern twist, and a screening of Woody Allen’s “The Mighty Aphrodite.”

“Classical themes still apply to us today, which we can see in ‘The Mighty Aphrodite,’ a modern movie which utilizes a chorus – something that was used in every Ancient Greek play,” Farkas said. “The play from which we will be performing a scene from shows the myth behind the birth of democracy. Since democracy is something that is so widespread in today’s world, it is important for students to understand where it originated.”


Page last modified March 11, 2015
Report a problem with this page