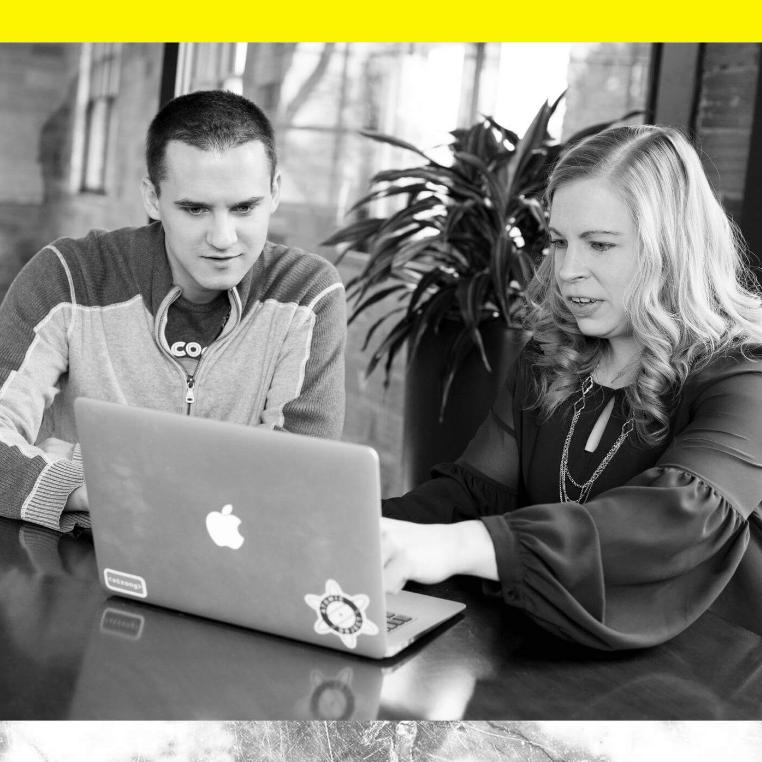 Reprinted from the Winter 2019 issue of Grand Valley Magazine.

Classics to Career: Alumni reflect on applications of studying classical texts in their current professions

STORY BY MATTHEW MAKOWSKI / PHOTOS OF HUNTER BY ELIZABETH LIENAU

A common misconception about collegiate Classics programs is that the study of “dead languages” is a “dead end” in terms of career paths for students.

Melissa Morison, associate professor of Classics and department chair, said Grand Valley alumni are proving that is a myth by using the transferable skills they acquired through the degree program to earn success in their professions.

“The study of ancient Greek and Latin helps all students develop self-discipline, an ability to unlock difficult problems through the application of a combination of rigorous logic and creativity, an unflagging refusal to quit when things get tough, and other useful habits of mind,” said Morison.

Classics alumni also find themselves prepared to face the challenges in the world today because Morison said they are the same as those faced by ancient societies.

“What constitutes good government? What is justice? What is the best way to manage diversity and difference? Through close study of such questions and the ways ancient people rose to meet these challenges, Classics students are thinking deeply about real-world problems and are then equipped to work with others in a variety of industries to think collaboratively about real solutions,” said Morison.

Morison said a common trend is for students to double major, pairing the skills and knowledge obtained in Classics with another field of study that can lead to careers in law, communication, art, economics, medicine, library science, information technology, and more.

Here are five Classics alumni whose careers have been influenced by experiences analyzing and studying classical texts.

Pantheon in Rome
“What do you want to be when you grow up?”

This common question posed to young children typically leads to answers including professions like doctor, firefighter, singer or Lego master builder. But for Jaclyn Panter, the answer was always “archaeologist.”

Panter’s interest in archaeology extended throughout her childhood and into her time at Grand Valley.

“I had a particular interest in ancient Rome and Greece coming into Grand Valley, so when I saw an ancient civilization course offered as part of my Honors course track, I was immediately hooked,” she said.

“I promptly changed my major and immersed myself in the Classics Department.”

Panter said faculty and staff in the Classics Department encouraged her to customize her educational experience based on her interests. This led to Panter tailoring her emphasis to include archeology and architectural history and museum studies.

All of these focus areas taught her concepts she applies to her current job as a space planner for Meijer. Panter is responsible for designing how and where deli, bakery, meat and seafood products will be placed on their respective fixtures in stores.

“I bring to my daily work an understanding of how people move through space and experience a constructed environment,” said Panter. “I also apply my experience by translating basic architectural rules to merchandising, like the utilization of symmetry as a simple way to help unfamiliar customers understand a new space.”

Favorite classical text: Anything from the Stoic philosophers, such as Marcus Aurelius (Greek) or Seneca (Latin)

In her role as a software designer and delivery lead at Atomic Object, Brittany Hunter leads a team of software designers and engineers as they build custom software products for a variety of clients. She also works with potential customers to understand the scope of what they want to build.

Hunter said most of the skills needed for her role were learned and amplified as a Classics major.

“Studying classical languages was a never-ending exercise in methodically parsing through a problem, holding multiple possible solutions in my head based on the possibilities and constraints posed by the grammar and syntax, and honing in on the meaning as I solved each word, all while evaluating which information is important to solving the challenge at hand,” Hunter explained.

Most importantly, Hunter said her time studying Classics taught her that in business and all other aspects of life, everyone walks through each day carrying hopes, fears, motivations and experiences.

“Studying ancient drama, philosophy, poetry and stories in the Classics program shaped my understanding of the human experience and enhanced my ability to empathize with those around me,” she said, adding she has become an effective team leader because of her ability to build strong relationships.

Sinning said her Classics background helps her manage the needs of the 30 requests from providers she processes daily. She said learning how to be organized has been the most applicable lesson she learned throughout her degree program.

“Organization is king in my role, and juggling numerous Classics courses and a new language quickly taught me how to track deadlines and multi task effectively,” she said. “Translating Latin allowed me to hone my English writing skills, which has been a great help with drafting e-mails and training presentations for our team.”

Sinning said she appreciates her background in the well-rounded discipline of Classics because the field covers a bit of everything, from literature, foreign languages and history to law, ethics and art.

“Classics majors build a unique skill set that stands out to employers and fits into any position,” said Sinning. “They're prepared for just about anything that the workplace can throw at them because they're used to dealing with multiple, complex units of information at the same time.”

Chani Jones is responsible for preserving the art collection and overseeing the management of collection records at the Martin Museum of Art at Baylor University. As part of a small staff, she also wears other hats, including exhibition planning.

When developing exhibitions, Jones’ team strives to create interesting and accessible showcases that reach a diverse audience ranging from advanced art history students to K-12 groups and the general public.

“All those skills enable me to take research, whether my own or a colleague’s, and pare it down into a narrative of short, digestible and accessible parcels of information for public consumption,” said Jones. “They allow me to find those points of common human experience and present information in such a way that our museum visitors are able not only to comprehend it, but also to find a personal connection to it.”

Jones said without the opportunities she was provided at Grand Valley, including a study abroad experience in Rome, she would not be on the career path she’s on today.

“I was able to attend the Intercollegiate Center for Classical Studies and study ancient and Renaissance art and architecture first-hand, as well as visit internationally recognized museums — an experience that has been invaluable in my field,” she said.

Jones also credits her current career success to her time working as an undergraduate collections management assistant for Grand Valley’s Art Gallery team, which provided her with opportunities to learn museum practices.

JAMES KENNEDY, ’09
Assistant Attorney General for the State of Michigan

Favorite classical text: The Consolation of Philosophy by Boethius

It’s no small feat to legally represent the Michigan Bureau of State Lottery, Michigan Liquor Control Commission, and the Michigan Gaming Control Board, which is why James Kennedy is thankful to have a background in Classics.

“While I am not required to translate Greek or Latin texts, my job is heavily dependent on my ability to use language persuasively and to research issues of importance to my clients,” said Kennedy, assistant attorney general for the State of Michigan.

After graduating from Grand Valley in 2009, Kennedy took a year off to prepare for the LSAT. He graduated with a law degree from the University of Notre Dame in 2013 and then began working as a clerk for an Indiana Circuit Court judge. Following his clerkship, Kennedy worked for a small firm in Indiana, before moving back to Michigan to work on school policy in 2015. Later that year, he took a position with the Alcohol and Gambling Enforcement Division of the Attorney General's office and has been there for more than three years.

Kennedy said there is a good reason why many students choose to earn a Classics degree.

“It is a universal education. It is a shame that people see Classics as a pathway that only leads to academia,” said Kennedy. “The Classics are an education in humanity, and I think we have lost a great deal of perspective by abandoning them to become an exclusive preserve of the ivory tower. The perspective of antiquity is an antidote to narrow historical thinking.”

Kennedy said that learning more than one language through translating classical texts at Grand Valley set him up for success.

“The Classics opened a whole world of thought and reading, which is closed to those who can only read English,” he said. “The ability to read Latin is the greatest benefit of my Classics degree, and one that I use on a regular basis.”


Page last modified March 5, 2019
Report a problem with this page