Permanent link for Mathias Alten's "The Grand River" on October 1, 2020

In preparation for the exhibition MATHIAS J. ALTEN: AN AMERICAN ARTIST AT THE TURN OF THE CENTURY that traveled to The Dennos Museum Center at Northwestern Michigan College in Traverse City, September 20, 2020 through January 31, 2021, the #GVSU Art Gallery team, including staff and students, gathered stories and information about Alten's life and work that create a vivid portrait of the artist. Che Robinson, GVSU class of 2021, was particularly interested in this painting...

"While I was looking through old photographs of Grand Rapids I stumbled across images of men and women sitting in boats on flooded streets. I was immediately interested since I recognized many of the streets as ones that I drove down everyday. I eventually learned that in March of 1904 the Grand River flooded, reaching a record breaking 19.6 feet and causing 2 million dollars in damages (45 million when adjusted for inflation) to homes and businesses in West Grand Rapids.

In his painting The Grand River, Mathias Alten depicts the river as moody and vaguely threatening. Smoke drifts up into the sky from industrial buildings which dot the opposite bank. The sky itself is a murky yellow, loose brushwork gives it a swirling movement that is reflected in the river below. The view of the river itself is blocked by skeletal black bushes that stretch out over most of the composition, blocking the viewer from access to the river. Alten painted this image in 1904, perhaps reflecting the recent devastation." Che Robinson

Posted on Permanent link for Mathias Alten's "The Grand River" on October 1, 2020 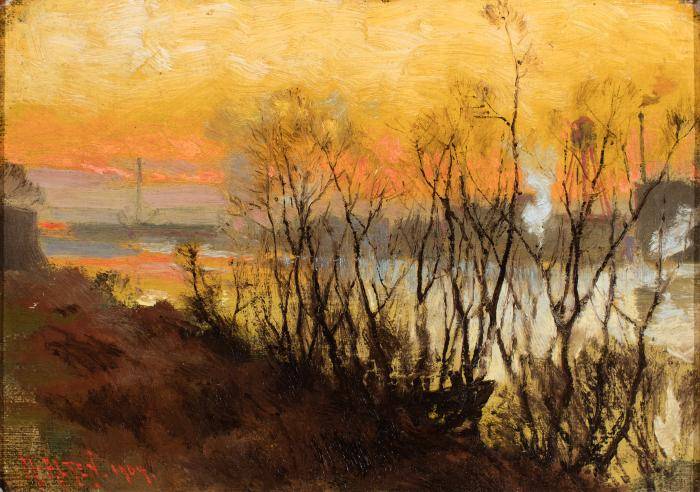 Posted on Permanent link for Mathias Alten's "The Grand River" on October 1, 2020

Page last modified October 1, 2020
Report a problem with this page