Art is Everywhere at GVSU

Interaction with art can inform social discourse, encourage civic dialogue, foster creative and critical thought, and provide avenues for personal reflection. It is for these reasons that art is everyone at GVSU.

All of the artwork in the Raleigh J. Finkelstein Hall may be viewed online.

Incorporating Art in the Classroom

The Art Gallery works to encourage appreciation and understanding of art and its role in society through direct engagement with original works of art. This is done in support to the GVSU 2016-2021 Strategic Plan.

GVSU 2016-2021 Strategic Plan, Objective 3.D.4:
At least 15% of faculty integrate the institution's art collection into their curricula and use it in their instructional activities.

Need help integrating art into your teaching? Visit our Art and Learning webpage for more information.

The artwork installed across from the labs provide a conceptual interpretation of medical ultrasound and cardiovascular imagery. The image on the left titled “African Sculpture” by Sheila Pinkel, was produced through the process of xeroradiography, a type of x-ray imaging that utilizes a special coated plate allowing a picture to develop without the use of liquid chemicals. The image on the right by Darryl Curran titled “Carrotid Scan” assumes to be a riff off a carotid ultrasound; a medical test used to determine narrowed arteries. Adding the extra “r” in carotid references the scanned carrots placed in the top of the image. The image was produced by a technique called sconography, commonly known as scanner photography. 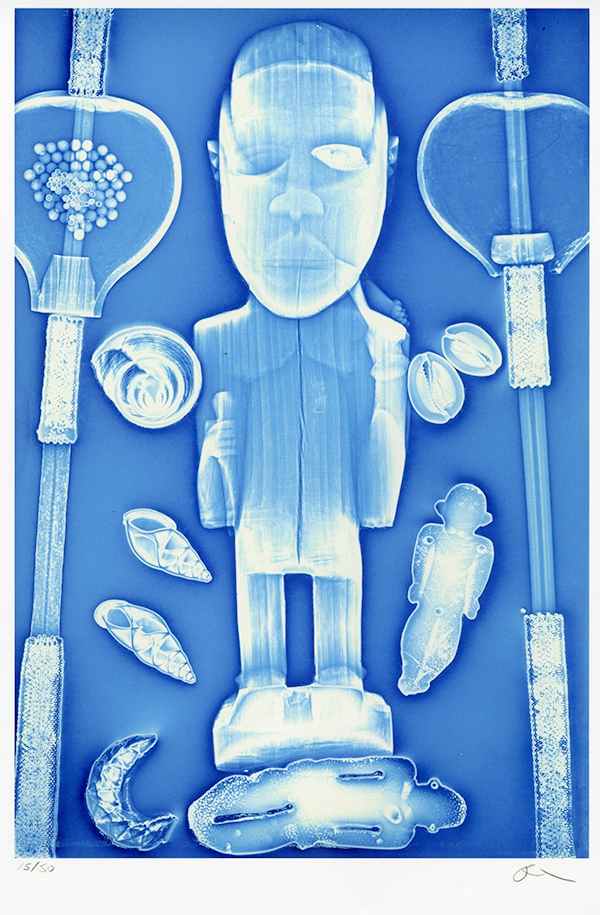 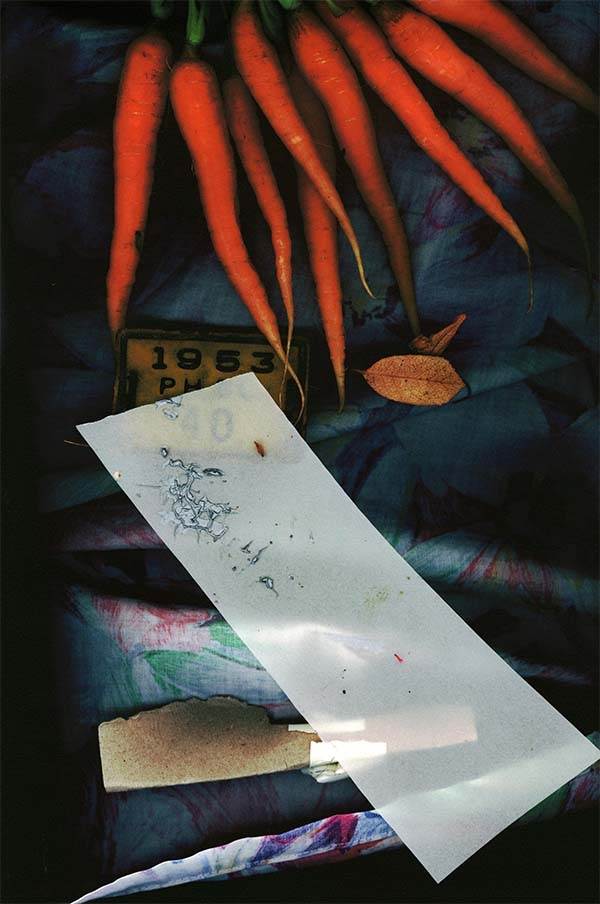 The first level of RFH has Occupational Therapy (OT) Labs as well as a large lobby area for students to congregate or work independently.

This floor is street level with expansive views out into the surrounding neighborhood.  Keeping in mind the interests of the Finkelstein Art Advisory Committee, many of the works exhibited on this level were produced by local artists including: Stephen Duren, Michael Pfleghaar, Sheryl Budnik, Reb Roberts, Elaine Dalcher and Rick Beerhorst. In addition to contemporary local artists displayed in the lobby areas, photographs by Peter Fink (1907-1984) are also showcased. Peter is the uncle of Raleigh Finkelstein and is a well-known photographer of his time. The images have been given to the University through a promised gift of Mort and Peg Finkelstein (Raleigh’s brother).

Kelly Allen also has a piece on the 1st level. Allen is a local artist with a master’s degree in fine art and is currently pursuing a Master of Occupational Therapy degree. Her piece titled, “Bioforms 1” is an exploration of microcosmic forces at the cellular level and how these forces affect the macrocosmic level of human groups and cultures. #funfact. The painting glows in the dark! At the far east wall of the lobby is a painting by Jay Constantine titled, “The Crusader’s Misadventures.”  Constantine is a Professor of Painting at Kendall College of Art and Design.  The concept for the piece references the Fourth Crusade initiated by Pope Innocent III.  The painting depicts the sorrows of the crusade and gives a modern-day viewer the opportunity for reflection.  The piece is painted in the style of trompe-l’oeil, a technique used to give a flat painting the appearance of being convex or bubbled out in shape. 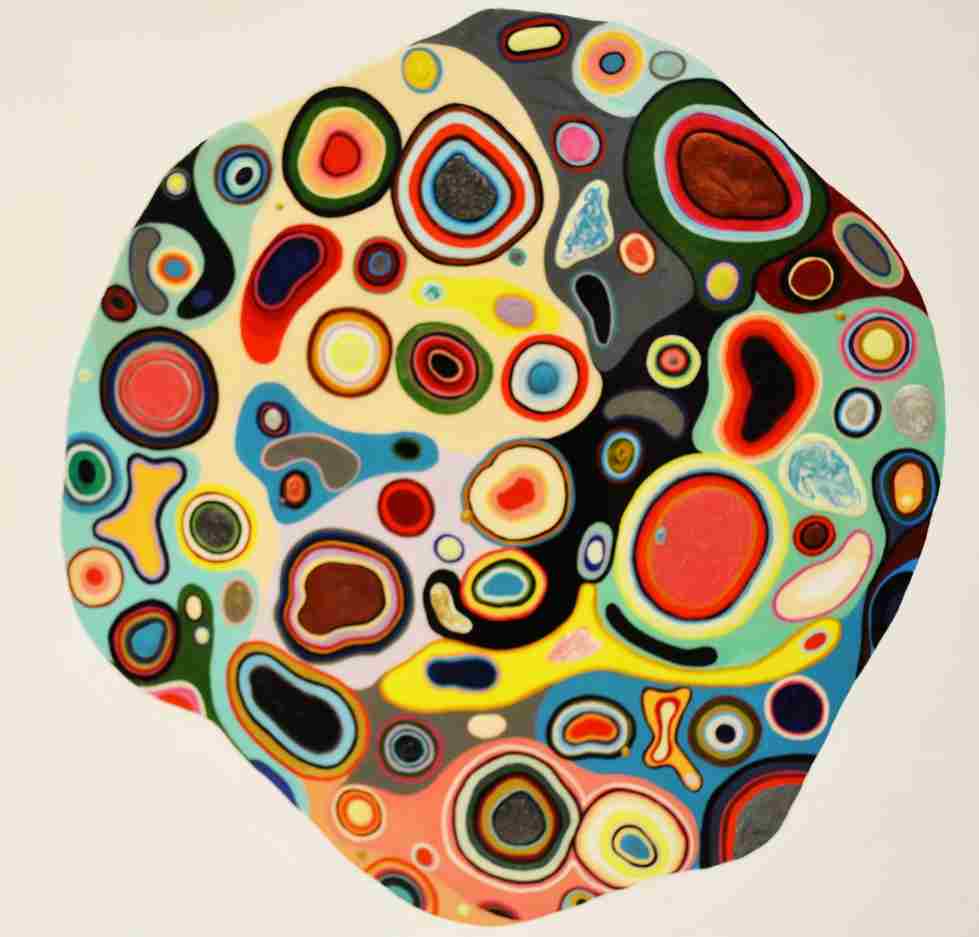 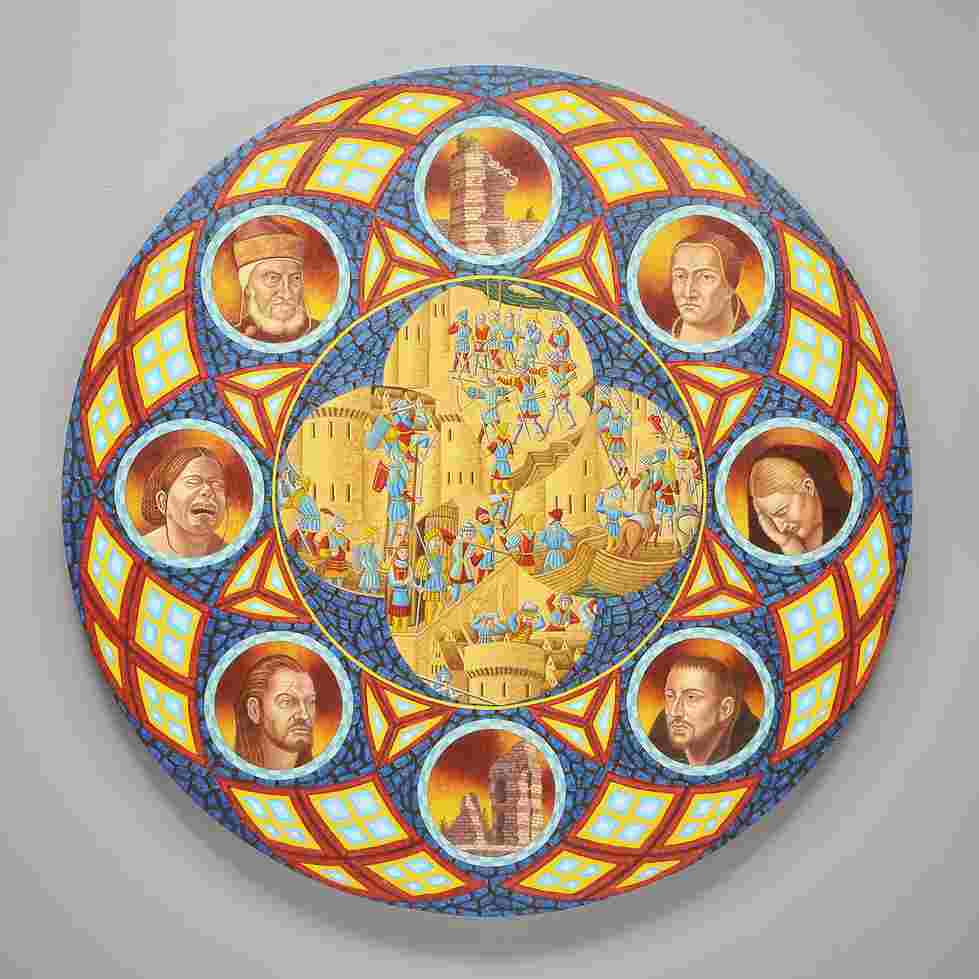 The second level of RFH has student study lounges, Public Health research labs and Occupational Therapy (OT) seminar rooms. The GVSU Master of Public Health (MPH) program aims to cultivate student’s adept in problem solving by utilizing quantitative and qualitative data. Students in this program will develop their observation skills through experiential learning. The Master of Science and Occupational Therapy program educates GVSU students in working with clients of all ages who have developmental, physical or mental disabilities. The ultimate goal of an Occupational Therapist  is to improve their client’s ability to perform daily human activities.

A goal of the Finkelstein Art Advisory Committee and the GVSU Art Gallery was to install works of art that can be utilized by faculty in their curricula.  The art gallery plans to facilitate the integration of art in the curricula through faculty partnerships and programs that aim to develop observation skills and evoke empathy; critical skills for a successful OT and Public Health student. Another goal of the Art gallery and Art Advisory Committee was to exhibit works of art that depicts various types of medical patients and to exhibit works of art created by medical patients. The work exhibited on the second level of RFH meets these goals because it is work produced of patients or by medical patients. It is also artwork that evokes empathy and requires thoughtful observation from the viewer. For example, the top left two images produced by California artist Ted Meyer represent a patient who suffered from Stage 4 Brain Cancer. Meyer photographed the patient after rolling ink on her head where a scar remains from surgery related to her brain cancer. The image on the right is the monoprint made from the patients inked scar. Click here to view more additional works of art from this series by Ted Meyer at Finkelstein Hall. 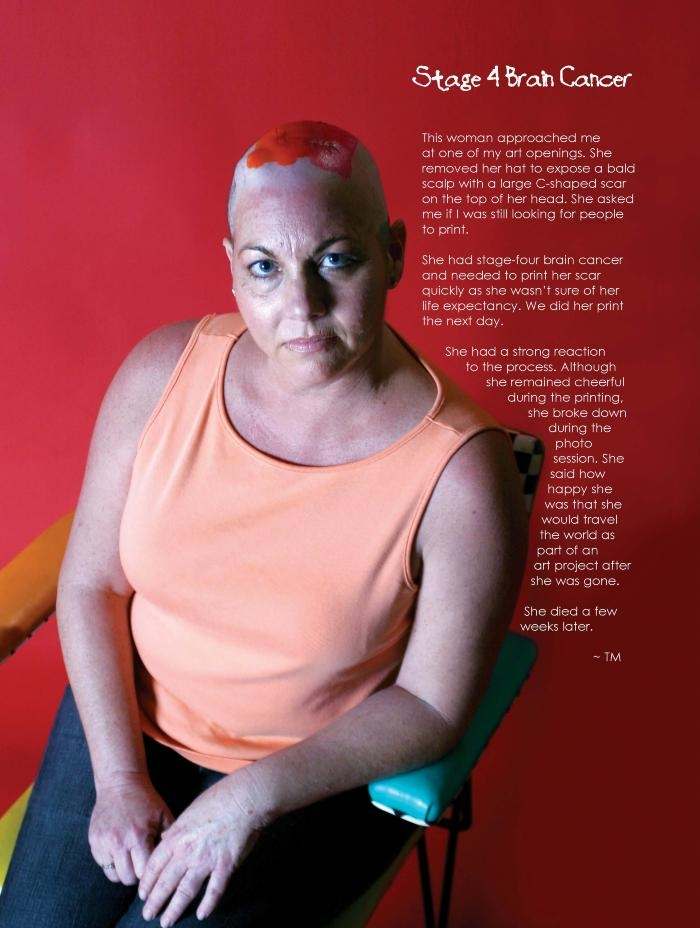 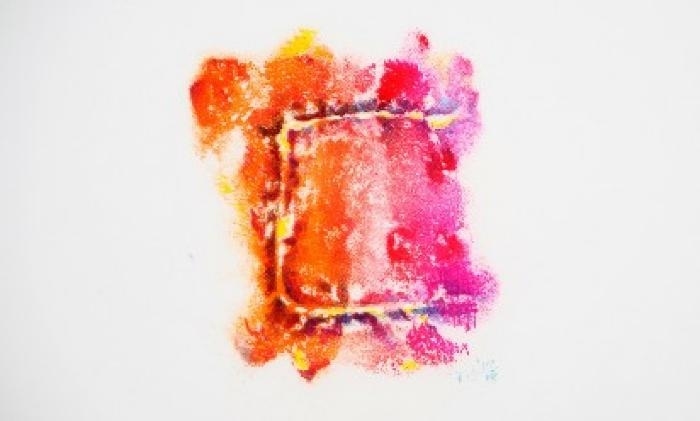 The third level has Child Observation Labs, and Communication Sciences & Disorders programs. Knowing that children will be on the third level, the Advisory Committee wanted to have works of art that are child friendly. We used this opportunity to connect with the Belknap neighborhood and purchased works of art from Coit Creative Academy. All proceeds from the purchased works went back into the Coit Creative Academy classroom supplies. “The Germ on My Hand” by Evangelina F on the top left, was created by a kindergarten student at the Coit Creative Arts Academy. The academy offers an art-based curriculum that integrates creative expression, movement, and music with academic excellence.   We also featured drawings produced by children attending the Flint Linden Charter School.  The GVSU Art Gallery collaborated with Stephanie Smedley and the GVSU Department of Charter Schools to create an exhibition utilizing these drawings by the students. The title of the exhibition was “Young Flint Speaks: Flint Lives Matter.” The exhibition is now part of the university’s permanent collection. 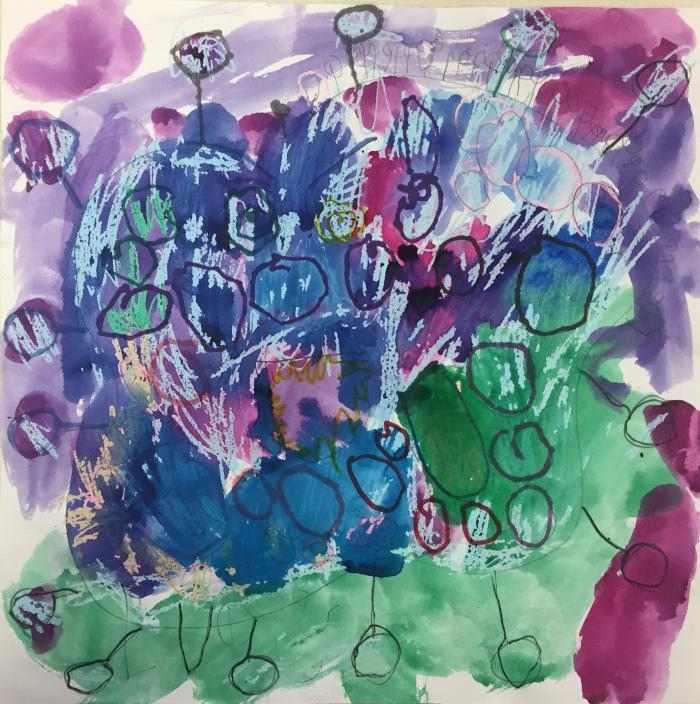 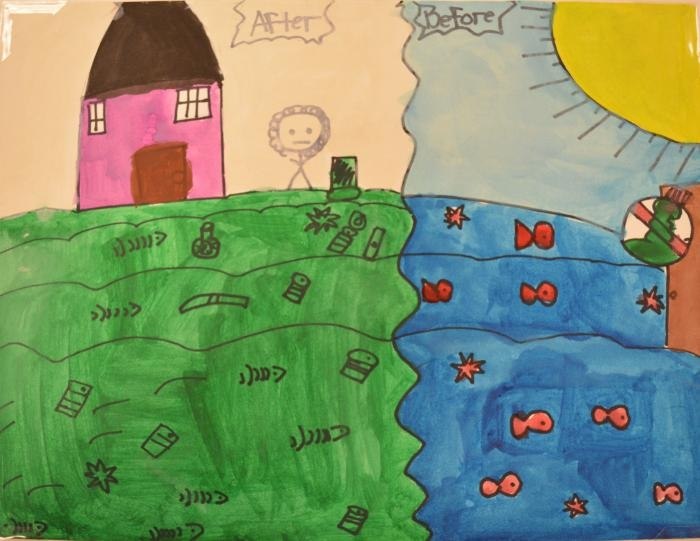 The fourth level of RFH provides office space for professors of Allied Health Sciences along with other Health Science programs.  There is also faculty and student collaboration space and a beautiful view of the Belknap neighborhood.  To compliment the view, the GVSU Art Gallery installed archival images of the Belknap neighborhood. These images have been donated to the GVSU permanent collection by the Grand Rapids City Archives and the Grand Rapids Public Museum. The idea to use archival images of the Belknap neighborhood was originated from the Finkelstein Arts Advisory Committee. The two photographs depict views of Belknap Park. This site was the city’s first reservoir, built in 1874. Belknap Park was renamed in 1932 to honor Civil War veteran Captain Charles Belknap. The park was further developed as part of a WPA project in the 1930’s. Approximately two-million cubic yards of earth were removed from the park and used for freeway construction through downtown Grand Rapids. 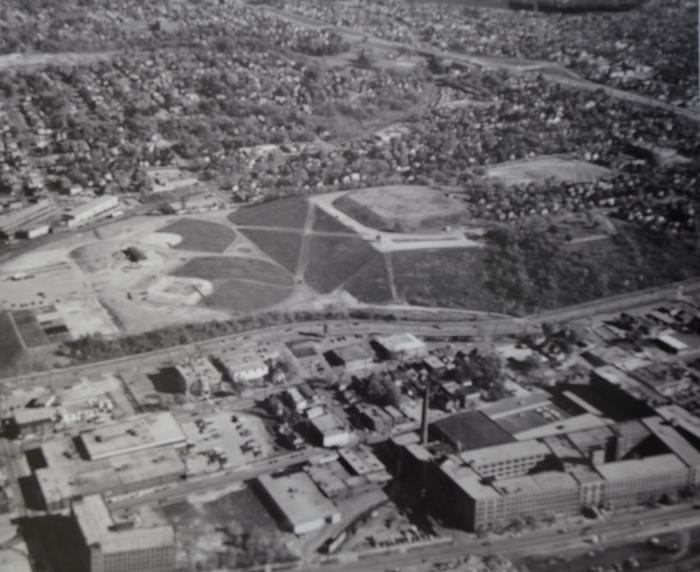 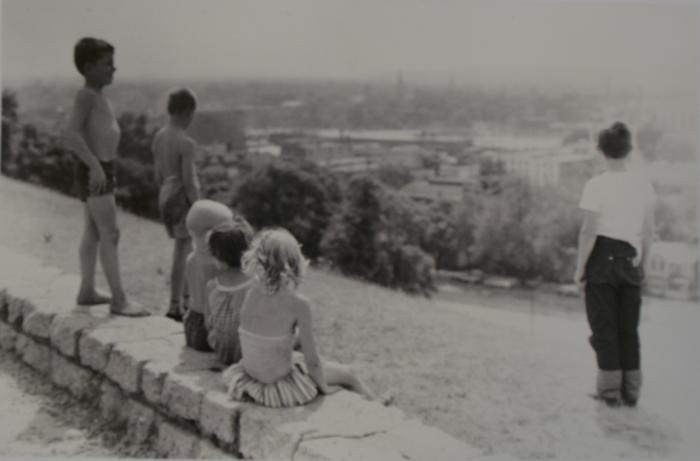 For collections care and general questions about our art collections, please contact our Collections Manager, Nicole Webb, at: webbnic@gvsu.edu

For assistance in integrating artwork into the classroom and your teaching curriculum,  please contact our UX/Learning Manager, Amanda Rainey at: raineyam@gvsu.edu


Page last modified July 21, 2020
Report a problem with this page