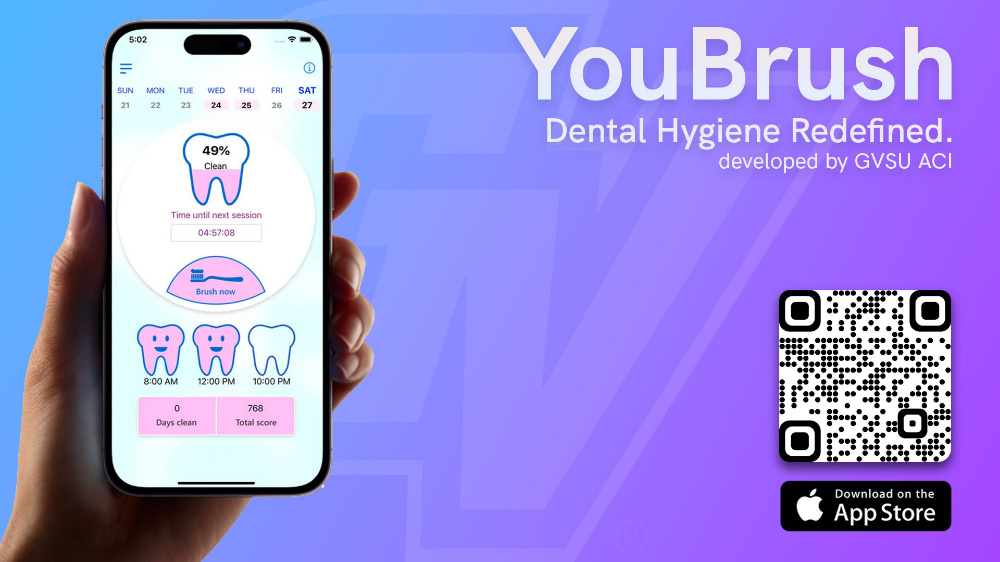 For over a decade, the Applied Computing Institute and its predecessor, the Mobile Apps, and Services Lab, have played an active role in The School of Computing. One of the most notable roles ACI plays for our students is forming industry partnerships, which sponsor applied research and experiential learning opportunities for our faculty and students. One such project, the YouBrush app, has gone through many iterations and has now come to fruition.

Many individuals have worked on YouBrush throughout its creation, such as faculty members Dr. Jonathan Engelsma, Dr. Rahat Rafiq, and students including Alvaro Ardila, Evan Boardway, Griffin Going Meghan Harris, and Esteban Jaramillo. The team’s goal was to create an application that would help users improve the frequency and qualitative aspects of their brushing habits.  The project involved a combination of machine learning and simple game mechanics to help influence user behavior.

The team faced a problem determining how to construct the app. How can an app on a phone or other device detect if someone is brushing their teeth or not? The team approached this problem by building a machine learning model that would be able to accurately recognize the sounds produced when one brushes their teeth. This app has been designed to listen to the user while they brush their teeth and provide guidance based on the audio captured by the smartphone.

Additionally, to preserve user privacy, all of the audio capture and processing occurs on the user’s private device. The audio is processed and immediately discarded and never stored on the device or transmitted on the network. This "edge-based" machine learning technique is different from many popular smart speaker products, where captured audio is transmitted over the Internet to more powerful systems for processing and storage.

The team has also been studying a variety of different gamification techniques to learn their impact on encouraging sustained usage of the app over time.  For example,  the app implements a "brushing streak". Users who use the application when brushing their teeth at least twice daily will keep their streak alive. Once a day is missed, their streak is gone, and they must start over. Other game mechanics are being investigated and incorporated in the app over time.

Students Esteban and Griffin both note that working on the YouBrush application has been rewarding and challenging. It has forced them to combine the computing skills they have learned in the classroom to real-world problems.

YouBrush is an app still being maintained and improved in the Applied Computing Institute.  If you are interested you can download it from the Apple App Store.
Download YouBrush


Page last modified December 13, 2021
Report a problem with this page