Markets of India: A Wealth of Opportunity 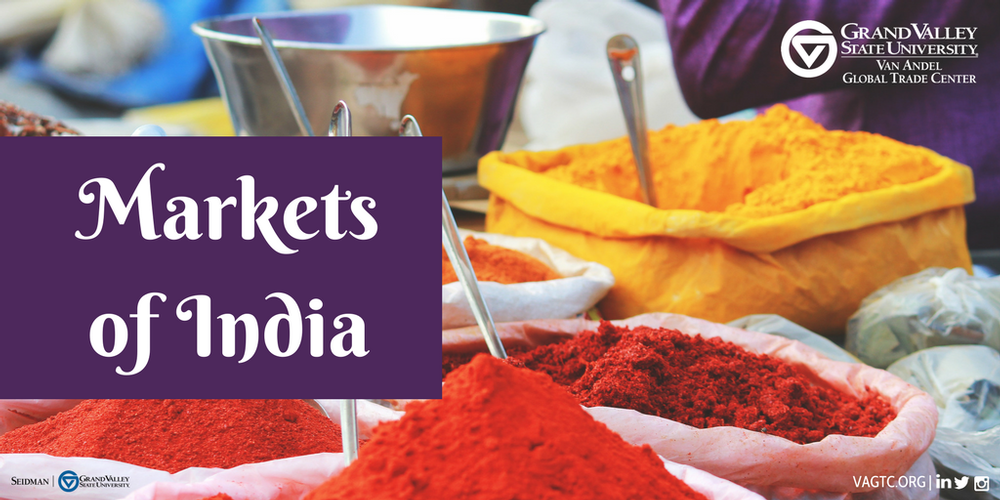 India is not only a beautiful country with a diverse collection of languages and cultures; it is also the world’s fourth largest economy. With a declining poverty rate, a population of more than 1.3 million, and increasing GDP, India has become an immense point of interest to those looking to expand their business internationally.

India is a mixed economy that is one of the fastest growing in the world. In fact, many expect it to become one of the top three global economic powers in the next ten to fifteen years. Facts supporting this prediction are: the 7.1% growth rate of India’s GDP from 2016 to 2017, an improved Doing Business Ranking of 100 out of 190 countries, and the boom of India’s startups, including more than 4,750 technology companies. According to the Boston Consulting Group, the main forces behind India’s growth and increasing consumption are rising levels of affluence, continuous urbanization, and shifting family structures.

India and the United States

India’s immense growth has provided numerous possibilities for both domestic and global business. The U.S. has already taken advantage of these opportunities, making it India’s largest trading partner. Since 2016, U.S. exports to India have increased 5.8% and imports from India have increased 4.8%. The main U.S. exports to India included precious metals, medical instruments, agricultural products, and mineral fuels. The top imports from India were pharmaceuticals, precious metals, mineral fuel, and agricultural products. This bilateral trade relationship promotes U.S. expansion into the Indian industries of defense, education, energy, technology, banking, and more.

Beyond analyzing a country’s growth potential, it is crucial to understand the culture of the country in which you are conducting business to succeed. When meeting with an Indian business partner, he/she will most likely speak English, and they may arrive fifteen to thirty minutes late. Saying Namaste or giving handshakes with no other forms of physical contact, are common greetings. However, handshakes with members of the opposite sex have yet to be completely embraced, so be aware of the environment before doing so. It is important to address people individually, starting with the oldest member of the group and using professional titles such as Mr. or Ms. The exchange of business cards or small gifts during a first meeting is a widespread practice. Be sure to receive those with the right hand to avoid any disrespect.

In business environments, the majority of men wear suits, and women typically wear pantsuits or long skirts. Nevertheless, this can change depending on the company or city. When dining with a business partner, numerous dishes are shared with the entire table. Be sure to note that the right hand is used to eat, although when entertaining guests from other cultures many Indians are okay with their guests using cutlery. It is considered extremely disrespectful to eat using the left hand or to take any food off someone’s personal plate.

Keep in mind, however, that India is a diverse country with many different languages and customs, so these cultural norms will vary by region. It is wise to research the specific city to which you are traveling in order to adequately prepare for any language differences or cultural nuances.

Are you interested in learning more about what opportunities the Indian market may hold for your business? Join GVSU’s Van Andel Global Trade Center on May 9, 2018 for the 33rd Annual Business Conference – “Creating Global Success” and VIP Reception during West Michigan’s World Trade Week. Meet with featured speakers, Mr. Shantanu Sarkar, from the U.S. Commercial Service’s consulate office in Kolkata, and Ms. Ruth Shira from PRA Global as they present “Understanding India’s Market.” More information and registration can be found at WORLDTRADEWEEKMI.ORG.


Page last modified April 9, 2018
Report a problem with this page