New Grant on Aquatic Fungi in the Great Lakes 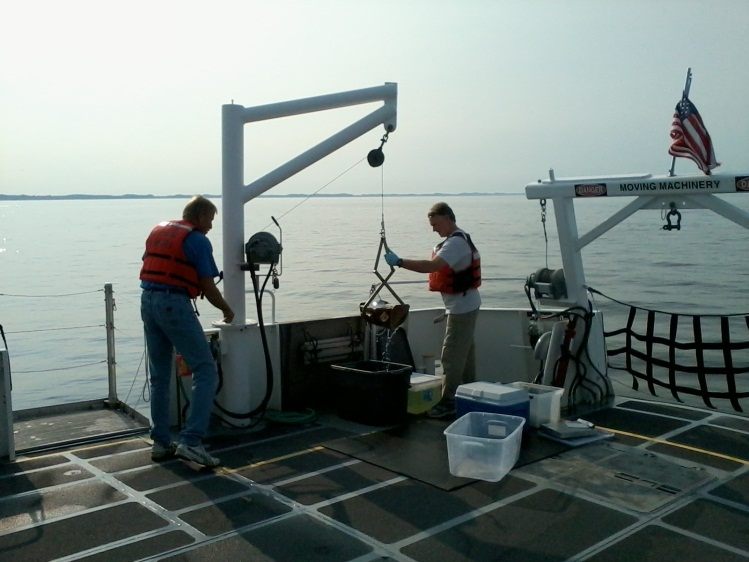 Living organisms have long been a source of compounds with medicinal properties.  In recent years, specific groups of organisms, particularly the fungi, have been central to the discovery of novel compounds with medical applications.  Indeed, many of our modern antibiotics are derived from fungi.  The discovery of new fungal-based chemicals with potential applications has been an ongoing effort in medical research and scientists are now exploring novel habitats in the hope of finding new compounds.  Surprisingly, the Great Lakes, and particularly the deepest regions of the Great Lakes, remain relatively unexplored but starting this summer, that will change.  A research team including Dr. Mark Luttenton (AWRI), Dr. Robert Cichewicz (Univ. of Oklahoma), Dr. Susan Mooberry (Univ. of Texas Health Science Center), and Dr. Andrew Miller (Illinois Natural History Survey, Univ. of Illinois) recently received over $2.5 million in grant funding from the National Institutes of Health to conduct a concentrated survey of the Great Lakes for fungal-based bioactive chemicals.  The goal of the research is to evaluate the potential use of natural fungal compounds in the treatment of pediatric cancers.

The research team has been very pleased with their preliminary results.  The number of fungal isolates from sediment samples collected from Lake Michigan, Lake Huron, and Lake Superior has more than tripled the number of species reported for the Great Lakes and has yielded several fungal species and genera that have not been previously identified.  More importantly, several isolates have demonstrated activity in standard laboratory assays.  The entire project is expected to take four years to complete.

Al Steinman hosted representatives of the Frey Foundation for a meeting and tour of AWRI on July 3.

Kevin Strychar was invited to participate in a roundtable meeting of local business CEO’s and environmental managers to discuss “Why is there extreme disagreement between knowledgeable people on the subject of global warming”.  Chief Meteorologist Bill Steffen with TV8 was there to cover the story and to participate in the debate.

Jeremy Newton attended and presented at the 2014 North American Congress of Conservation Biology held in Missoula, Montana from July 13 – 16.
Newton, J., R. Thum, A. Sepulveda, and A. Ray.  Using environmental DNA for early detection of and rapid response to Eurasian watermilfoil (Myriophyllum spicatum).

Kevin Strychar was one of four keynote speakers at the 2nd International Conference on Oceanography, held in Las Vegas, Nevada from July 21-23.  Kevin’s keynote talk was titled “Does climate change drive immunological memory in lower marine invertebrates?”  In addition to being one of the conference organizers, Kevin chaired the following sessions: (1) Chemical and Physical Processes in the Ocean, (2) Marine Biota and Ecosystem Function, (3) Ocean Resources, Sea Food and Sustainability, (4) Oceanography and Climate Change, and (5) Tools and Technologies in Oceanography.  He was also a judge for the poster competition.

Mark Luttenton has received a sub-award on a grant from National Institutes of Health to do sampling in various parts of Lake Michigan.  They are searching for possible anti-cancer substances.

“Water quality boat tours will be offered again this summer!”
Via e-mail from the Macatawa Watershed Project (Macatawa Area Coordinating Council), July 17, 2014
The article is about the free public cruises and open house aboard the research vessel W. G. Jackson on August 8 and 9.

“MACC to offer boat tours on Lake Macatawa”
Holland Sentinel, July 17, 2014
The article is about the free public cruises and open house aboard the research vessel W. G. Jackson on August 8 and 9.

“Asian carp controversy: recent ruling by U.S. Court of Appeals has environmental, economic impact on Muskegon”
MLive/Muskegon Chronicle, July 17, 2014
Al Steinman was quoted regarding the U.S. Court of Appeals ruling which continues to prevent the construction of a barrier between the Mississippi River and the Great Lakes in order to try to prevent the spread of Asian carp into the Great Lakes.

“Free boat tour teaches about Holland’s lakes”
Holland Sentinel, July 22, 2014
The article is about the free public cruises and open house aboard the research vessel W. G. Jackson on August 8 and 9.

July 8
A group from the National Oceanic and Atmospheric Association (NOAA) visited the LMC as part of their regional tour visit.

July 12
AWRI’s research vessel W.G. Jackson had a successful GLRI trip to White Lake on July 12 to participate in the annual Celebrate White Lake event.  Over 200 people participated in a cruise and/or open house on the vessel.  The next GLRI trip will be to Holland on August 8 and 9.

July 18
The AWRI summer student interns gave presentations on their experiences while working here titled:  “What I did this summer”.

July 29
Teachers from the Groundswell Great Lakes Stewardship Initiative took a trip on the W.G. Jackson and did Earth Partnership in Schools activities at AWRI on July 29.  Rachel Kent from Fruitport Middle School was co-facilitator for this workshop along with Janet Vail.