Coastal wetlands are particularly sensitive to water level fluctuations (WLF), given their location at the land-water interface. Alternate dry and wet periods associated with WLF can result in sediment exposure and oxidation, which can cause substantial release of nutrients, such as phosphorus (P). The nutrient released from the sediment could stimulate algal blooms, resulting in impaired water quality, reduced ecotourism, and impacted fisheries.

Dr. Solange Duhamel from Columbia University is currently working with researchers at AWRI, Dr. Geraldine Nogaro and Dr. Alan Steinman, to assess 1) the effects of WLF on P release from the sediment to the water column and 2) the bioavailability of the P released for microbial nutrition in the water column. Sediment cores were collected in August 2013 from moderately nutrient-rich and highly enriched wetlands, which are part of the Muskegon Lake Area of Concern, and allowed to dry simulating water level declines.

In October 2013, the sediment cores were rewetted with surface water collected at the respective sites, simulating water level recovery. Experiments are being conducted to determine if nutrients released from the desiccated/rewetted sediments into the water column affect structure and function of the microbial community (bacteria and phytoplankton). This research will provide important information on the ecological impacts of WLF on Great Lakes coastal wetlands, especially with regard to potential negative effects of water level fluctuations on water quality. 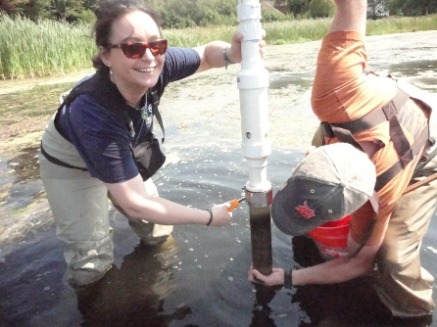 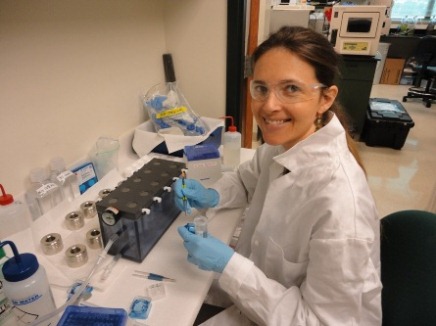 Dr. Solange Duhamel in the lab.

Oct 1 & Oct 3
Whitehall Middle School students visited the Annis Educational Foundation Classroom for hands-on activities and took a vessel cruise on the W.G. Jackson. The visits were funded by the Alcoa Foundation.

Oct 2
The Muskegon Area Chamber of Commerce held their Muskegon in Focus meeting in the Multipurpose Room and took a vessel cruise on the W.G. Jackson.

Janet Vail supervised a water festival held at Montague High School for 3rd grade students on October 2. The festival was funded by the Alcoa Foundation.

Rod Denning and John Koches presented to the Fremont Area Community Foundation Ice Mountain Board on October 9 regarding a new Critical Lands Mapping Project in the Upper-Central portion of the Muskegon River.

Rick Rediske and Brian Scull each presented at the 2013 Michigan Green Chemistry and Engineering Conference held at GVSU on Oct 14.
Rediske, R. Oral. Polybrominated diphenyl ethers: from your couch to your dinner table in three easy steps.
Scull, B. Poster. The Implementation of microscale chemistry in the AWRI Laboratory.

Carl Ruetz was a guest lecturer for an Environmental Journalism class at Michigan State University on October 22.

Al Steinman presented at a Green Town meeting in South Bend, IN on October 10.

Al Steinman co-hosted and presented at the inaugural Blue Economy Project meeting held in Grand Rapids on October 18. There were approximately 40 people in attendance from various state-wide agencies or institutions.

Al Steinman was an invited attendee at a meeting on Integrated assessment of water levels in Great Lakes from a broad perspective at a meeting at University of Michigan in Ann Arbor on October 28. Al gave a presentation on Ecological Impacts.

Janet Vail was a guest speaker for the Allendale section of Environmental Studies 201 on October 8.

Janet traveled to Sheboygan, WI for the 2013 State of Lake Michigan Conference on October 16. She gave the welcoming remarks at the start of the conference. The next SOLM conference will likely be in Michigan in 2015.

GVSU Annis Water Resources Student Spotlight
The Lanthorn, Danielle Grimm, undergraduate student working in the Dr. Ryan Thum Lab at AWRI was highlighted in this article. We also mention that we are currently accepting applications for Winter 2013.

Great Lakes state playing catch-up in effort to build water-based economy
Bridge (Magazine), The Center for Michigan, October 23, 2013 AWRI was mentioned as a catalyst in the blue economy development taking place in the Muskegon area.

The five best practices for success in your major
The Lanthorn, October 24, 2013 Matt Breen, former graduate student at AWRI, was mentioned in this article.