Target Inquiry (TI) is a NSF-funded 2½-year program designed to meet the professional development needs of middle and high school science teachers for developing an inquiry-based science classroom. TI is designed to 1) provide teacher participants with an authentic science laboratory research experience, and 2) facilitate the integration of their research experience into their classroom through the design, implementation, and evaluation of inquiry-based curriculum.

AWRI welcomes 4 TI teachers from west Michigan for this summer:

Joe Lutz is a Physics teacher at Lakeshore Middle School in Grand Haven Area Public Schools. His project with Rick Rediske involves working on the development of a cost effective biosand filter prototype, which can be built from locally sourced parts in developing countries. Biosand filters combat the leading cause of death and disease in the developing world by reducing parasites, bacteria and viruses found in contaminated water. Joe will be collecting data and monitoring the efficacy of the prototype in reducing E. coli concentrations in contaminated waters.

Ashley Meyer is a Middle School Science teacher from South Haven Public Schools. Her TI project with Bopi Biddanda involves preparing a literature review on climate change over annual to millennial scales; conducting research on using time-series data from the Muskegon Lake Observatory to understand lake dynamics; and developing a lesson plan about what time-series environmental data can tell us about climate change and lake ecosystems.

Jennifer Woods teaches Environmental and Veterinary Sciences to 11th and 12th graders at the Muskegon Area Career Tech Center. Her project is studying the downstream drift of benthic macroinvertebrates in streams. Ultimately, her work is aimed at testing the predications of a mathematical model with field data. Her project is a collaboration with other students (Jennifer Waller, an AWRI summer intern), faculty (both Carl Ruetz and Jim McNair) and postdoc (Dave Janetski). 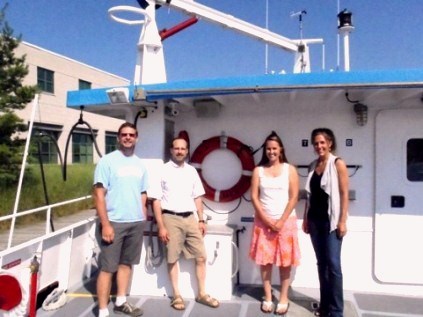 July 12 & 19
AWRI summer student interns gave presentations on their experiences while working here titled: What I did this summer.

July 17
Participants in GVSU's Target Inquiry program met as a class in the Annis Educational Foundation Classroom and enjoyed a tour of the AWRI facilities.

AWRI hosted a summer potluck picnic and cruise on the W.G. Jackson so that our staff and students could invite their family or close friends to tour AWRI and participate in a working cruise onboard the W.G. Jackson.

A Consumers Energy group toured the new field station and enjoyed a cruise on the W.G. Jackson.

Bopi Biddanda attended the annual GVSU Radiation Safety Committee meeting on the Allendale campus on July 18. He is the Chair of the Committee, serving a 3-year term.

Al Steinman hosted a group from Consumers Energy as a thank you for their Field Station gift on July 26th.

Kevin Strychar was invited to attend a conference called Ocean Exploration 2020 held July 19 - 21. Approximately 120 leading ocean scientists discussed where ocean research is going and/or needs to go over the next 7-10 years.

Janet Vail assisted with parts of the Groundswell sponsored Great Lakes Stewardship Initiative (GLSI) professional development workshop for teachers during the week of July 22. That group took a cruise on the research vessel D.J. Angus on July 23.

The W.G. Jackson traveled to Waukegan, IL for four days of cruises July 9th 12th. Highlights included a trip for the Chicago Wilderness committee, two trips for the Waukegan Park District, one trip for the junior sailors from the Waukegan Yacht Club, and five trips for various groups serving children in the predominately Hispanic and African-American communities of Waukegan. Judy Beck from the USEPA Great Lakes National Program Office was onboard one of the cruises.

The W.G. Jackson was in White Lake, MI for three cruises and some open houses on July 20th. Tanya Cabala presented narrated cruises about the White Lake Area of Concern and its restoration.

Al Steinman was a guest lecturer for Environmental Science (BIO 105) on July 29.

Janet Vail presented a program for Target Inquiry teachers who visited the LMC on July 17.

Floating laboratory hosts educational cruises at port
Portside Magazine (Portage, IN), Summer 2013 The article is about the recent trip to Port of Indiana/Burns Harbor the research vessel W. G. Jackson made.

What the flood of 2013 tells us about the importance of a healthy urban forest
The Rapidian, July 1, 2013 The Urban Tree Canopy project AWRI did in 2008 is mentioned in this article.