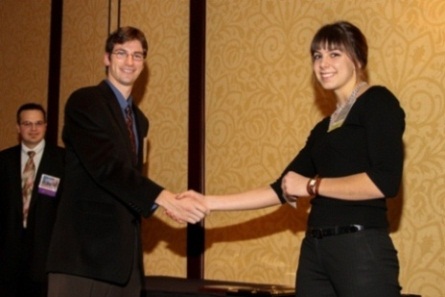 Hybrid watermilfoil are created through the successful reproduction of native, northern watermilfoil with invasive Eurasian watermilfoil. These hybrid plants can exhibit nuisance traits such as unusually fast growth and decreased sensitivity to herbicides. While it is well known that these plants can spread simply by cloning themselves, it was not previously known whether hybrids can sexually reproduce through their flowers. The ability to sexually reproduce is important because it can provide a mechanism for reestablishing nuisance hybrid populations after a herbicide treatment. However, hybrid plants and animals are often sterile because of how genetically different their parents are (e.g., mating a horse with a donkey creates sterile mules). Danielle, along with former AWRI graduate student Liz LaRue, showed that hybrid watermilfoils are able to reproduce sexually by manipulating hybrid plants in the laboratory. Furthermore, the study used genetic analysis of natural populations to show that naturally-occurring hybrid plants have reproduced sexually.

Attending and presenting at this conference was a phenomenal opportunity, says Grimm. To have my first oral presentation so well received by the aquatic plant management community was very encouraging, and I received some insightful feedback which will be very valuable when preparing presentations in the future. Also, this provided an excellent opportunity to network and gain insight into non-academic perspectives on herbicides and invasive species. Ryan Thum, my advisor, was also incredibly helpful throughout the entire process. He initially encouraged me to present at the conference, and subsequently helped in the development of the presentation through insightful commentary on delivery, language choice, and visual presentation of abstract genetic concepts.

Rick Rediske co-moderated a session with Peter Wampler and Azizur Molla on Sustainable Water Resources and Water Treatment in Haiti at the Geological Society of Americas meeting in Puerto Rico.

Al Steinman was a panel member for the US EPA STAR Fellowship Panel in Washington, DC on March 13 14.

Janet Vail was on an American Association for the Advancement of Science (AAAS) panel to assess the Utah-Wyoming National Science Foundation collaborative project (CI-WATER). She traveled to Salt Lake City for two days for a site visit on March 3 - 5.

Leon Gereaux, graduate student working with Bopi Biddanda, gave a presentation at the Biogeochemistry of the Great Lakes Workshop at Wayne State University on March 11-13.
Gereaux, Leon*. Oral. Using observatories to track lake metabolism and their role in the global carbon cycle.

Rick Rediske gave a presentation to the Tyler Creek Watershed Steering Group concerning the results of the 2012 E. coli monitoring program on March 12.

Rick Rediske and collaborators Azizur Molla and Peter Wampler attended and presented at the Geological Society of Americas meeting in Puerto Rico on March 20.
Rediske, R., P. Wampler, and A. Molla. Oral. A survey of household water quality in rural Haiti.
Molla, A., R. Rediske, and P. Wampler. Oral. Water and sanitation in Haiti an ethnographic perspective.
Wampler, P., A. Molla and R. Rediske. Oral. Karst vulnerability and water quality in Haiti.

Al Steinman gave a presentation by invitation to the League of Women Voters at Hope College in Holland on March 4.
Steinman, Alan. Oral. The role of climate change in the Great Lakes.

Al Steinman gave a presentation by invitation at the Lake Erie Center, University of Toledo on March 21 22.
Steinman, Alan. Oral. Ecosystem restoration from the Everglades to the Great Lakes: fact, fiction, and (occasional) frustration.

Kevin Strychar was a guest lecturer for a Big History presentation on the Allendale campus on March 25.
Strychar, Kevin. Oral. Humans and Climate Change.

Janet Vail presented part of a session at the Groundswell teacher professional development workshop on March 19. Karen Meyers of the GVSU Regional Math and Science Center presented as well.

Consumers Energy contributes $10 million to Michigan nonprofits in 2012
CBS Detroit, March 13, 2013 GVSU-AWRIs field station was one of the recipients of Consumers Energy donations.

Consumers Energy contributes $10 million to Michigan nonprofits in 2012, part of promise to care for Michigan communities
Electricenergyonline.com, March 13, 2013 GVSU-AWRIs field station was one of the recipients of Consumers Energy donations.