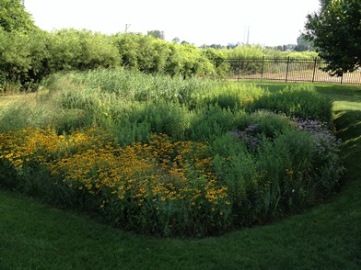 Sustainability A Journey without End

When we consider what makes a community sustainable, it is one that has identified a way to successfully balance social, economic, and environmental goals; it realizes that giving attention to just one area of emphasis can have detrimental effects on the other two. At the Annis Water Resources Institute (AWRI), our passion and our expertise lend themselves to the examination of environmental concerns. Even so, we are mindful that in order to have a healthy and sustainable environment, consideration needs to be given to helping foster a healthy society and a prosperous economy. This is one of the reasons that AWRI helped to organize the Muskegon Area Sustainability Coalition (MASC). MASC is entirely volunteer-based and yet has accomplished much since its creation in 2006. MASC has published The Prosperity Index every year since 2007. MASC has members that are involved in recycling, school lunch and local foods programs, energy conservation, and education policy. MASC meets as a whole the fourth Monday of every month at GVSUs Michigan Alternative and Renewable Energy Center in Muskegon.

Staff and faculty at AWRI realized a long time ago that there is a lot we can do both as individuals and as an institute that would contribute to a sustainability goal. If you ever have the opportunity, come and visit AWRIs Lake Michigan Center (LMC) in Muskegon. The first thing you are likely to notice before you even pass through the gate is the green roof on our boat storage building. Adjacent to that same building is a rain garden that processes rainwater flowing from our parking lot. Note that none of our parking lots discharge directly to Muskegon Lake, with stormwater runoff being directed to soils surrounding the facility. And perhaps most obvious is the dune grass that surrounds the LMC. This natural grass requires no mowing, limited maintenance, and eliminates the need for regular watering. Once you enter the building you will find a well-organized recycling center for plastics and glass, facilities for cardboard collection, and of course office paper recycling. In recent years many of our printers have been converted to double-sided printing, reducing the overall use of office paper. If you are caught using only one side of the paper, you are likely to hear about it from our Director! Yes, we take the whole idea of SUSTIANABILITY pretty seriously around here!! 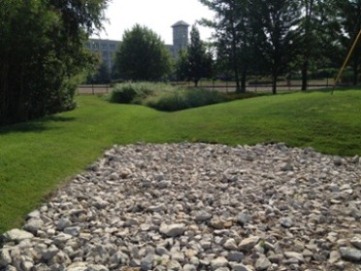 Pathway which processes rainwater from parking lot to rain garden. 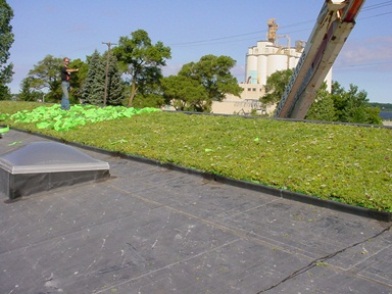 July 30
Representatives from Consumers Energy in Lansing met with GVSUs Matt McLogan and Al Steinman to discuss water resource issues. Al Steinman gave them a tour of the AWRI facilities.

The Discovery Channel's Profile Series will broadcast an episode on freshwater conservation, featuring AWRI, on August 15th at 7 am EDT.

The W.G. Jackson was at White Lake for Celebrate White Lake on July 21. There were three cruises and an open house. Tanya Cabala provided the commentary on the cruises.

The W.G. Jackson left for Chicago on July 30 to provide events for DePaul University. This will be followed by a visit to Milwaukee for a shoreline festival on August 4.

Bopi Biddanda initiated collaboration with U. of Waterloo, Ontario, Canada on photophysiological studies during a July 12 visit and now has a Dive-PAM (underwater fluorometer) on loan from them for the rest of the summer. Summer student intern Elizabeth Sommers accompanied Bopi on the trip to pick up the equipment.

Bopi Biddanda carried out a second field trip with MSU colleagues on Muskegon Lake as part of the Water Initiative Research Grant between our two institutions on July 10. Graduate student Leon Gereaux and summer student Anthony Weinke accompanied Bopi on this trip.

Bopi Biddanda took part in a summer expedition to the Lake Huron Sinkholes with collaborators from U. of Michigan and U. of California-Davis on July 24 - 27. Graduate student Michael Snider and summer student intern Elizabeth Sommers accompanied Bopi on this trip.

Al Steinman attended a Great Lakes Science Planning meeting in Ann Arbor on July 12. The intent of this group is to develop a science strategy to highlight the importance of science and academic involvement in Great Lakes restoration efforts.

Al Steinman attended a meeting on July 19 at the USGS office in Lansing to discuss the recently funded Silver Lake study.

Amanda Syers and Tara Eilers provided a tour for the Kandu group of disabled adults on July 13.

Rick Rediske presented the preliminary results of the AWRI benthic sampling for the Mill Debris project to the Muskegon Lake Watershed Partnership and NOAA on July 17.

Chuck Madenjian of USGS presented a paper titled "Sexual difference in PCB concentrations of burbot from Lake Erie" at the Tenth International Congress on the Biology of Fish in Madison, WI on July 17. Rick Rediske and Jim O'Keefe are co-authors.

Carl Ruetz was featured on the WMUS radio show to discuss fisheries issues on July 25.

Al Steinman gave a presentation for the general public on how climate change may affect the Great Lakes and surrounding areas at the Spring Lake District Library on July 24.

Ryan Thum and Liz LaRue attended and presented a poster at the annual meeting of the Society for the Study of Evolution in Ottawa, Ontario, Canada on July 5 11. AWRI staff members are bolded, graduate students are denoted with an *, undergraduate students are denoted with **.
R.A. Thum, E.A. LaRue*, and M.P. Zuellig*. Poster. Hybridization and rapid evolution of invasive aquatic plants in herbicide-treated lakes.

Janet Vail presented a MEECS Air Quality workshop in Lansing on July 27. The workshop is for the new cadre of MEECS trainers.

Rick Rediske, Peter Wampler, and Azizur Molla attended the GVSU Board of Trustee's Annual Meeting on July 13. Their project titled Safe and Sustainable Water for Haiti Project was recognized in the President's Report for outstanding work on behalf of the University.

July 3, 2012
Mark Luttenton was interviewed by Shelley Irwin for the Morning Show on WGVU radio.

Supports diagnostic evaluation for Silver Lake
Oceana's Herald-Journal, July 5, 2012 This is an editorial in support of proposed research of Silver Lake; AWRI is a partner in this proposed project.

July 13, 2012
Al Steinman was interviewed by Shelley Irwin about the W. G. Jackson trip to Ludington and about a scientist/media workshop on climate change.

In the News
MiBiz, July 23, 2012 Article is about the collaboration between GVSU-AWRI and MSU on two grants. One grant is with AWRI PI Bopi Biddanda, the other is with AWRI PI Ryan Thum.

What GVSU researchers hope to learn by studying lake sturgeon in Kalamazoo River.
MLive.com, July 25, 2012 Carl Ruetz and Ryan Thum are interviewed regarding the scope of the project they will be doing.

Grand Valley researchers to study culturally significant fish
GVNext, July 25, 2012 Carl Ruetz and Ryan Thum are interviewed regarding the scope of the project they will be doing.

GVSU water institute donation comes from $4 million anonymous Muskegon fund
MLive.com, July 28, 2012 Al Steinman was interviewed regarding the new field station and about the anonymous donation to this new facility.