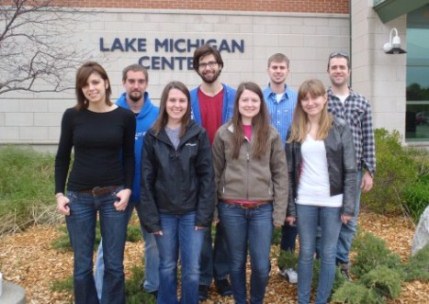 One of the joys of summer at AWRI is our student intern program. This summer, we welcome 10 student interns to the Institute. These students are funded by a variety of sources and work with different principal investigators.

In addition, 3 other students will be funded through a variety of grants. Tony Weinke will be working with Bopi Biddanda; Danielle Grimm and Jeff Bashnick will be working in Ryan Thums lab.
A special thanks to all of these bright, young researchers for their hard work and dedication!

June 16
The Scientech Club/Indiana science student group visited the AWRI as part of their annual trip. Their visit included a luncheon and tour of the LMC followed by a vessel cruise aboard the W.G. Jackson.

The W.G. Jackson traveled to Ludington on June 18 for three days of events. West Shore Community College and Mason Lake Intermediate School District helped with the funding, along with the Great Lakes Restoration Initiative. The W.G. Jackson then traveled to Manitowoc, WI for another three days of events, including looking for a shipwreck with ROVs, a teacher workshop with the Wisconsin Department of Natural Resources, open houses, and public cruises.

AWRI partnered with the Alliance for the Great Lakes for three days of teacher workshops on June 13, 14, and 15. The teachers worked with Great Lakes in My World curriculum, conducted a beach clean-up, and had a trip on the D.J. Angus.

Sara Damm gave a presentation titled Studies to support Ruddiman Creek implementation-ready TMDL for biota at the Ecolunch held at AWRI on June 1.

Geraldine Nogaro gave a presentation titled Influence of burrowing chironomid larvae and invasive filter-feeding mussels on nutrient biogeochemistry in eutrophic lake sediments at the Ecolunch held at AWRI on June 15.

Rick Rediske gave a presentation to the White Lake PAC on June 7 about contaminate levels in fish and the removal of the Restrictions on Fish and Wildlife Consumption BUI. The White Lake PAC is preparing public notices to remove the Degradation of Benthos, Eutrophication and Undesirable Algae, and Restrictions on Fish and Wildlife Consumption BUIs.

Al Steinman was a guest lecturer for NRM 150, Paul Keenlances class in Allendale on June 13.

Janet Vail was the featured speaker at a meeting of the Spring Lake Rotary on June 15. Her topic was AWRI: Who we are and what we do.

Andrew Sisson and Rick Rediske were among the co-authors of an article accepted for publication, which is based on the first chapter of Andrews master's thesis:
Sisson, A.*, P. Wampler, R. Rediske, and A. Molla. In Press. An assessment of long term Biosand Filter use and sustainability in Haiti. Journal of Water, Sanitation and Hygiene for Development.

Al Steinman's lab recently received a grant for $20,000 from the Community Foundation for Muskegon County for a collaborative P18O4 project with Rick Rediskes lab, USGS, and MSU.

Interdisciplinary project could improve water quality in Haiti
GVNext, June 1, 2012 Rick Rediske and other faculty recently traveled to Haiti to collect water samples and interview residents. This was possible because of a grant from the GVSU Center for Scholarly and Creative Excellence.

Students, profs studying area bacteria
The Alpena News, June 1, 2012 Graduate student Michael Snider and undergraduate student Tony Weinke were interviewed about their study of the Alpena Library fountain, because it has water like that found in nearby sinkholes.

Research ship offers cruises, programs
Htrnews.com, Manitowoc/Two Rivers, WI, June 17, 2012 The article is about the W. G. Jacksons trip to Manitowoc from June 23 25. Public cruises were made available during this trip.

Lake Express strengthens its Muskegon operations with staff promotion, contributes to GVSU
MLive.com, June 19, 2012 The event highlighting AWRI, hosted by the Lake Express that took place in May, was mentioned. AWRI received $5124.00 to put toward the new Field Station.

Working vessel offers tours
Ludington Daily News, June 20, 2012 The visit of the W.G. Jackson to Ludington made the front page news. AWRI intern, Tara Eilers, was featured in a picture along with a detailed article about the outreach events that were offered as part of our EPA Great Lakes Restoration Initiative grant.

Muskegon's history reflected in the unique geology of lake
The Detroit News, June 25, 2012 Mark Luttenton is interviewed about the geological history of Muskegon Lake.