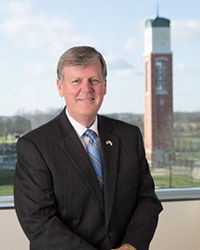 He is a retired captain from the U.S. Coast Guard with a long history in higher education leadership. He is also a tenured professor of chemistry at Grand Valley.

During his time as president, the university saw a steady rise in enrollment to nearly 25,000 students, the addition of 34 majors, and a dramatic increase in graduates.

A focus on student success has been a hallmark of Haas’ career. Within days of arriving at Grand Valley, students affectionately nicknamed him "T-Haas.”

Under his leadership, 2.3 million square feet in facilities were added. Projects included the construction of the Mary Idema Pew Library Learning and Information Commons and the P. Douglas Kindschi Hall of Science, the expansion of the Health Campus, the establishment of the GVSU Detroit Center and the renovation and expansion of the Thomas J. and Marcia J. Haas Center for Performing Arts. The university emerged as a leader in sustainability with 24 LEED silver, gold or platinum buildings.

He is married to Marcia (Knapp) Haas, a native of Union City, Michigan, and a graduate of Albion College. 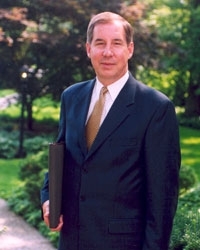 Under Murray’s watch, Grand Valley opened the Cook-DeVos Center for Health Sciences, Keller Engineering Labs and Lake Ontario Hall. The university continued to set enrollment records and began an impressive run of dominance in Division II sports. The Murray Living Center on the Allendale Campus is named after him.

Before arriving at Grand Valley, Murray served as state treasurer and education policy advisor to Governor John Engler from 1999-2001. Prior to his appointment to that office, the lifelong Michigan resident spent more than 20 years in various state government leadership positions, including state budget director from 1994-98 and deputy budget director from 1991-94, and posts in the departments of Social Services, Commerce, and Management. He also served as vice president for finance and operation at Michigan State University from 1998-99. 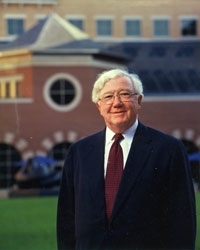 President Emeritus Arend D. Lubbers became president of Grand Valley in 1969 at the age of 37, making him one of the youngest college presidents in the nation. When he retired in 2001, he was the longest-serving public university president in the country. In the 32 years in between, Lubbers led the university’s evolution from a small, liberal arts college to a regional university.

An array of academic buildings and residence halls in Allendale, the creation of the Meijer Campus in Holland, and the opening of the L.V. Eberhard Center and Richard M. DeVos Center in Grand Rapids all occurred during the Lubbers presidency. The university also extended its service with programs in Muskegon and Traverse City, in cooperation with local community colleges.

Lubbers guided the university’s response to regional education needs with the establishment of the Seidman College of Business, the Kirkhof College of Nursing, and the Schools of Education, Social Work, Health Sciences, Engineering, and Communication. Also during his tenure, GVSU’s programs in music, art, chemistry, education, social work, business, and nursing earned professional accreditations. Lubbers Stadium on the Allendale Campus is named for him.

Lubbers is a native of Holland, Michigan and a graduate of Hope College, where his father, Irwin Lubbers, served as president. He received his master’s degree in history from Rutgers University in 1956, and then taught at Wittenberg College in Ohio before returning to Rutgers in 1958 to pursue his doctorate. In 1962, Life magazine named him to its list of the top 100 young men under 40 in the United States. Lubbers came to Grand Valley from Central College, in Pella, Iowa, where he had served as president for nine years. At the time of his appointment to that position, Lubbers was the youngest college president in the country, at 29. 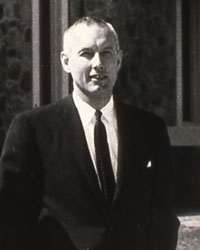 Zumberge retired from USC in 1991 and passed away a year later at age 68 in Pasadena, California.

James H. Zumberge Hall and Zumberge Pond on Grand Valley’s Allendale Campus are named for him, as well as Zumberge Hall of Sciences, one of the natural science buildings at USC.


Page last modified August 13, 2019
Report a problem with this page