Treatments for stress-sensitive psychiatric disorders including major depressive disorder (MDD) and post-traumatic stress disorder (PTSD) are effective in less than half of patients, showing a clear need for alternatives. Despite overwhelming evidence that environmental stress increases risk for psychopathology, the mechanism remains unclear. Existing research supports the hypothesis that genetic differences interact with environmental exposure in a dose-dependent manner. Clarifying the mechanism through which stress leads to psychopathology is an important avenue for identifying novel treatment modalities. An unhealthy diet may contribute to the etiology of stress-sensitive disorders, particularly for populations with high exposure to environmental stress and low access to healthy food. Indeed, a “Western” diet is linked to psychopathology in humans (Jacka, Kremer, et al., 2010; Jacka, Pasco, et al., 2010; Sinclair et al., 2016). Animal studies also link diet and psychopathology but findings are contradictory; diets high in fat can exacerbate (Baran et al., 2005) or ameliorate (Finger, Dinan, & Cryan, 2011) the impact of stress on brain structure, chemistry, and behavior. These contradictions likely result from differences in timing and duration of stress and diet exposure, the presence of metabolic syndrome, and differences in macronutrient content of the diet. While previous literature on stress x diet interactions focused on fat, increasingly researchers are recognizing that diets high in fructose or sucrose also increase risk for psychopathology in humans (Gangwisch et al., 2015) and influence central stress-response pathways and stress-induced behaviors in animals (Foster et al., 2009; Harrell, Burgado, Kelly, Johnson, & Neigh, 2015). The present study will take a systematic approach to exploring the role of diet on stress-induced changes in behavior and gene-expression in the absence of metabolic syndrome. It has long been known that the brain and gut ‘talk’ to each other and this bidirectional communication is important not only for physical health, but also mental health. Neuropeptides found in both the gastrointestinal tract and the central nervous system are instrumental in brain / gut communication and may mediate links between diet, environmental stress, and dysregulation of central stress-response systems, ultimately leading to symptoms of psychiatric illness. For example, corticotropin-releasing factor (CRF), the neuropeptide responsible for coordinating the behavioral, endocrine, and autonomic response to stress in mammals also influences feeding behavior, in part via interactions with another brain / gut neuropeptide, ghrelin. In addition to influencing feeding, ghrelin can increase brain CRF and has recently implicated in depression-like behavior (Bali & Jaggi, 2015; Poretti et al., 2015). To identify the mechanism through which diet influences stress sensitivity, the present study will assess expression patterns of CRF and ghrelin family transcripts.

I am currently recruiting students who would be interested in applying for S3 summer research opportunities to examine the interaction between high-sucrose diet and predator odor stress on behavioral outcomes in mice.  During the 2018/ 2019 academic year, students must have at least one full day on Monday or Wednesday available for meetings, training, and research. 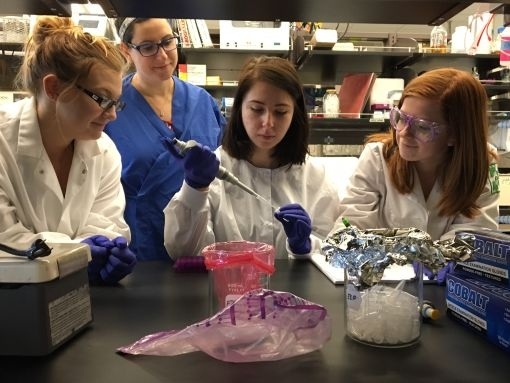 
Page last modified July 15, 2021
Report a problem with this page