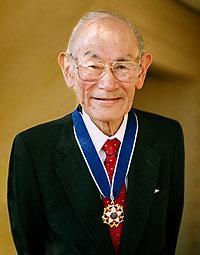 Fred T. Korematsu was incarcerated during World War II like many other American citizens of Japanese ancestry. Yet he defied a government order to report to an assembly center, and appealed his case all the way to the U.S. Supreme Court, which ruled against him in 1944. Years later, his conviction was vacated by the U.S. District Court of Northern California. Korematsu’s courage and activism were recognized when he received the Presidential Medal of Freedom from President Clinton in 1998. Korematsu is the first Asian American to be honored by a state and have a day named in his honor.

The program will begin with a video about Korematsu's life and legacy followed by brief remarks.

Connection to the Classroom
Social Justice and Human Rights (LIB 100)
Upon completion of this program, attendees will be able to describe the movement and judicial case filed by Fred T. Korematsu in fighting for his freedom.

Oppression/Discrimination (LIB 201)
Upon completion of this program, attendees will have gained new awareness about the history and social impact of the Japanese internment camps during World War II.

Diverse Communities (LIB 201)
Upon completion of this program, attendees will be able to analyze the history of Japanese Americans during World War II.


Page last modified January 5, 2016
Report a problem with this page