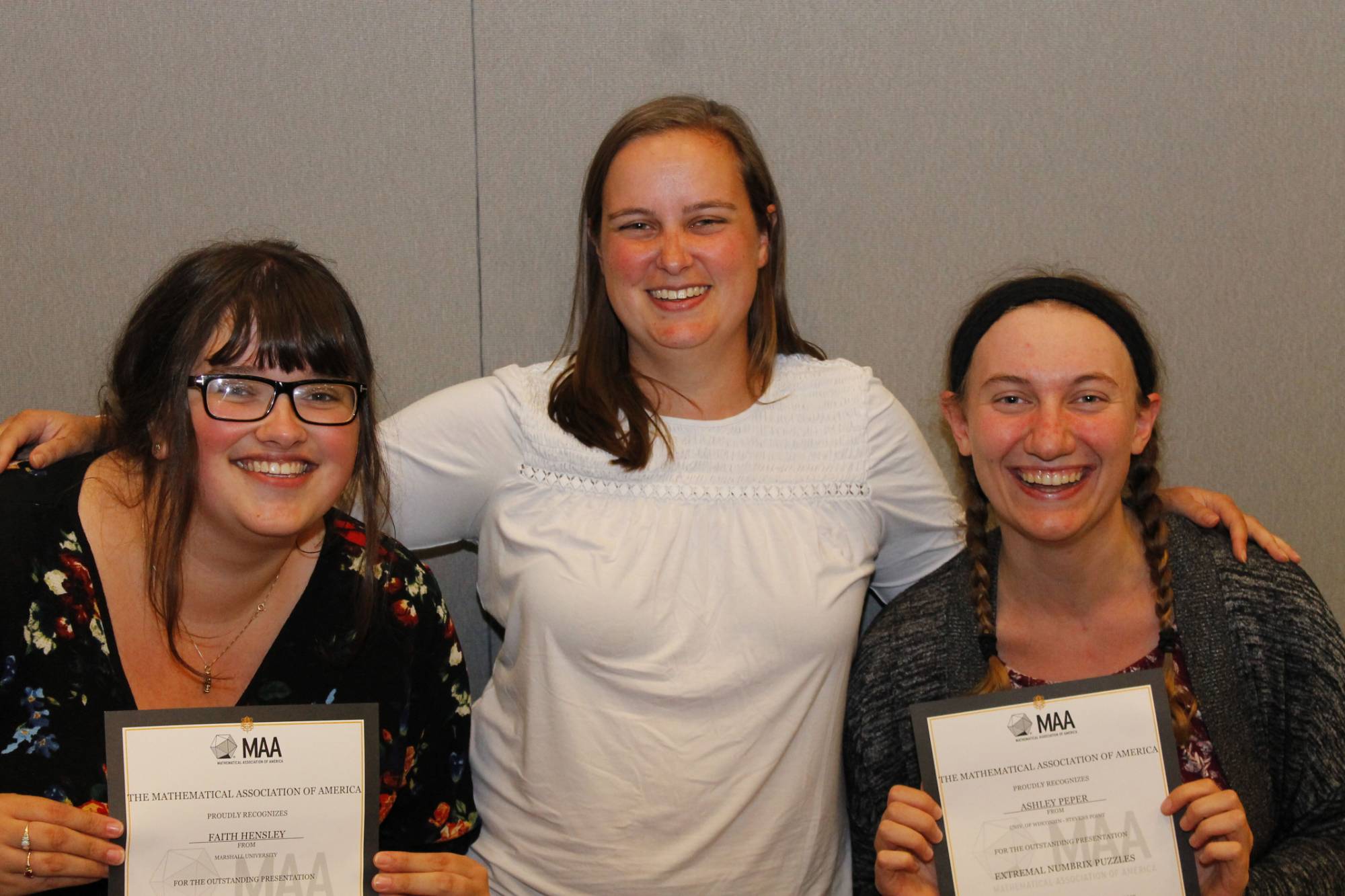 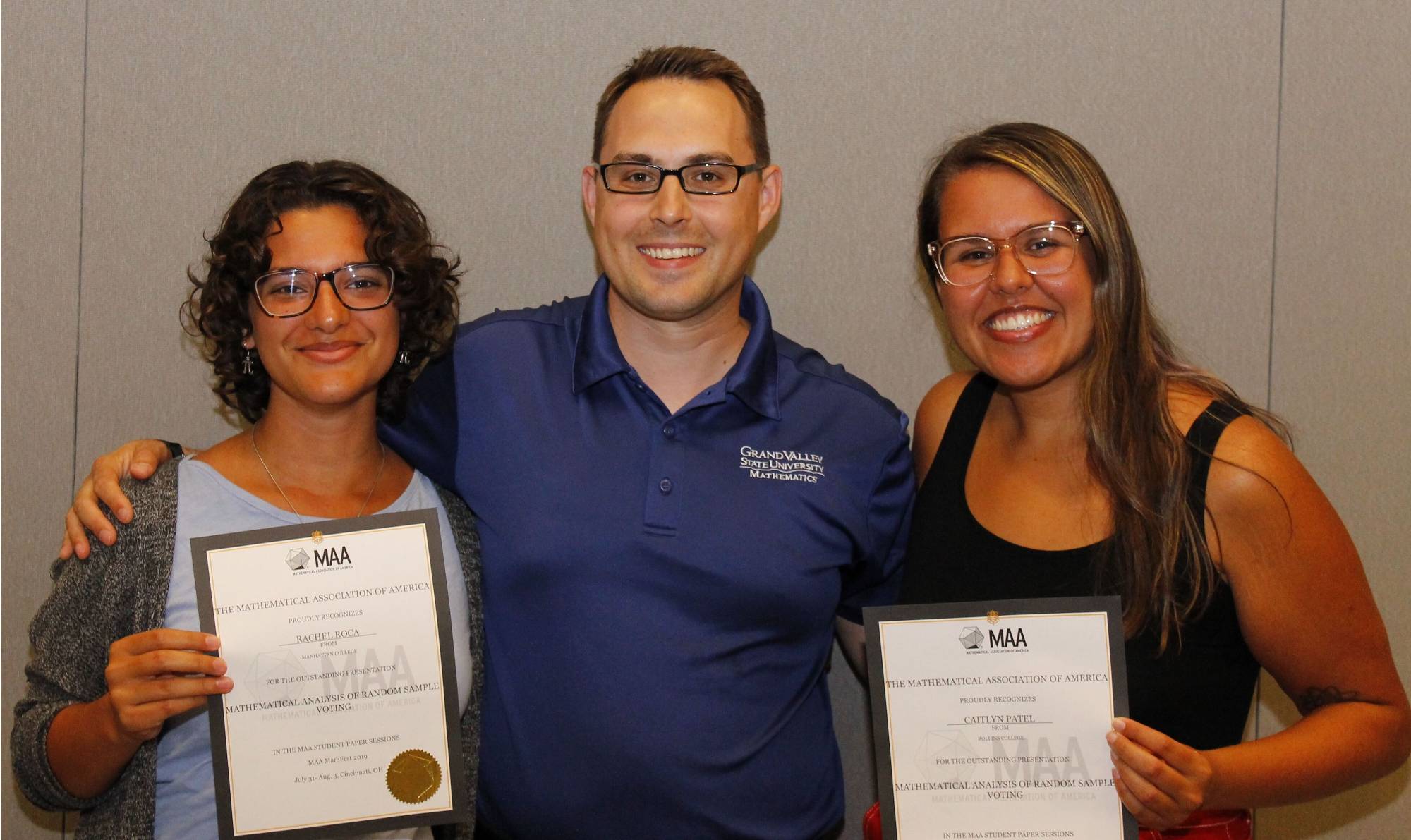 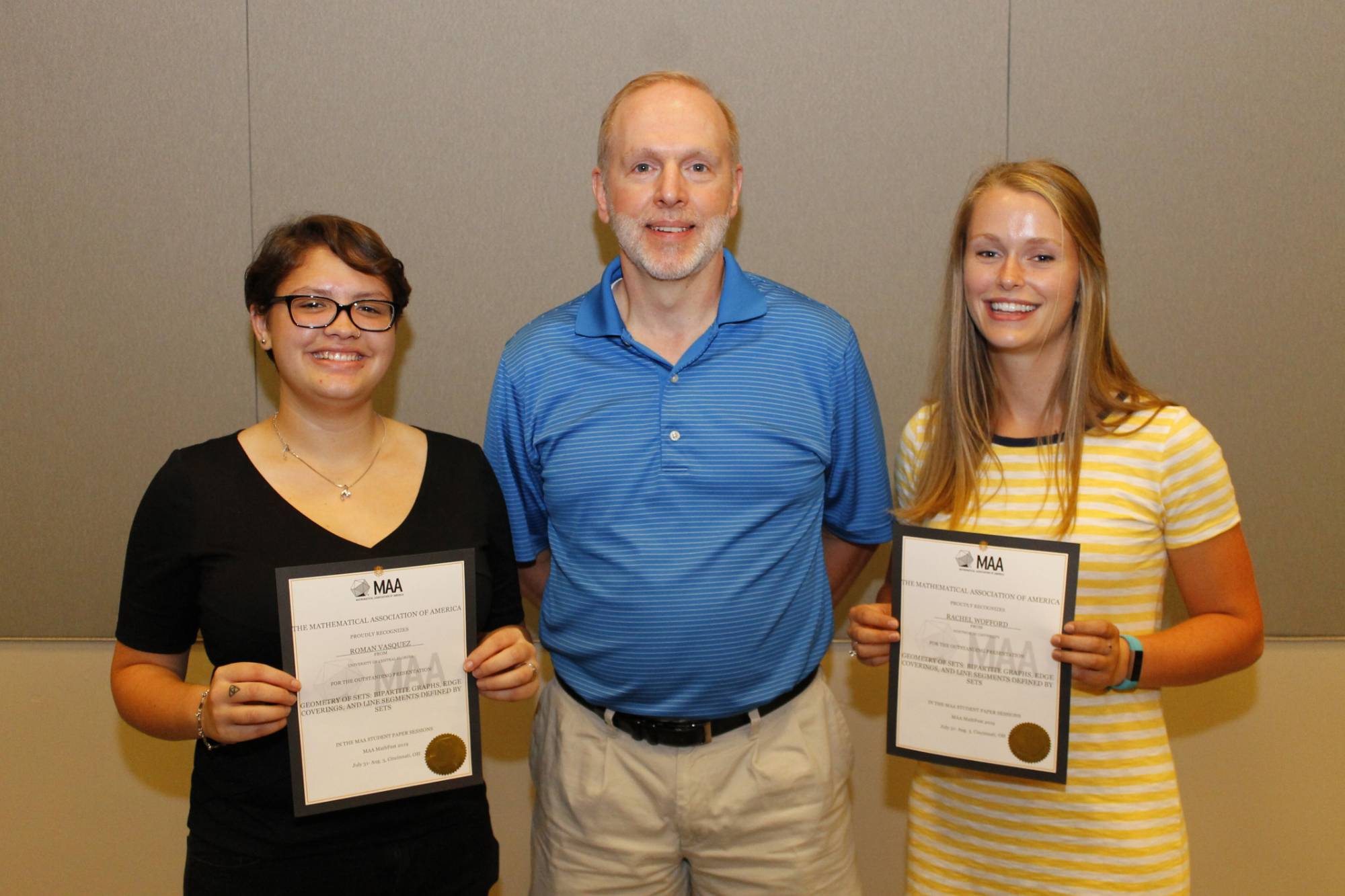 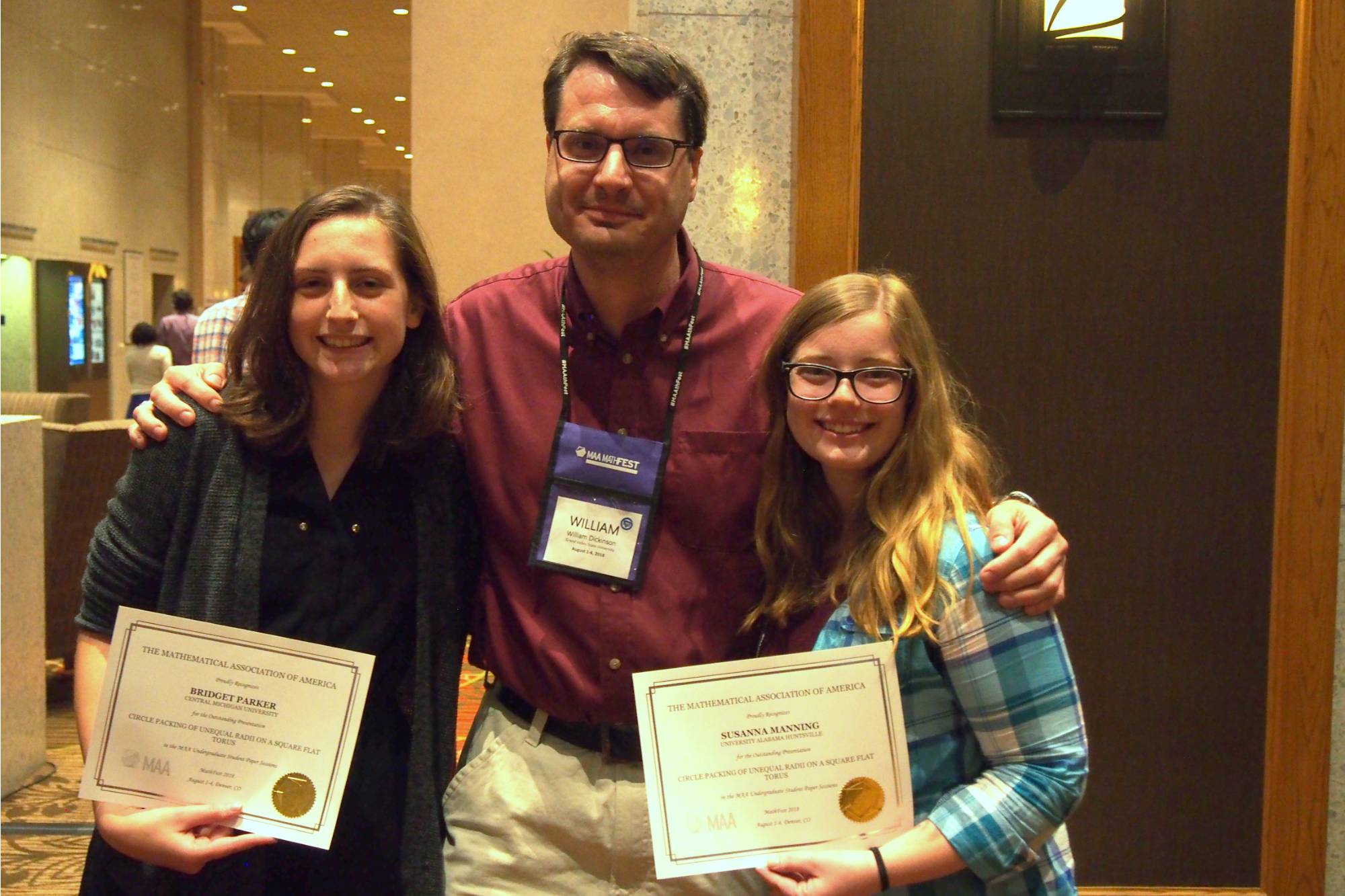 Susanna Manning and Bridget Parker (with mentor Will Dickinson) 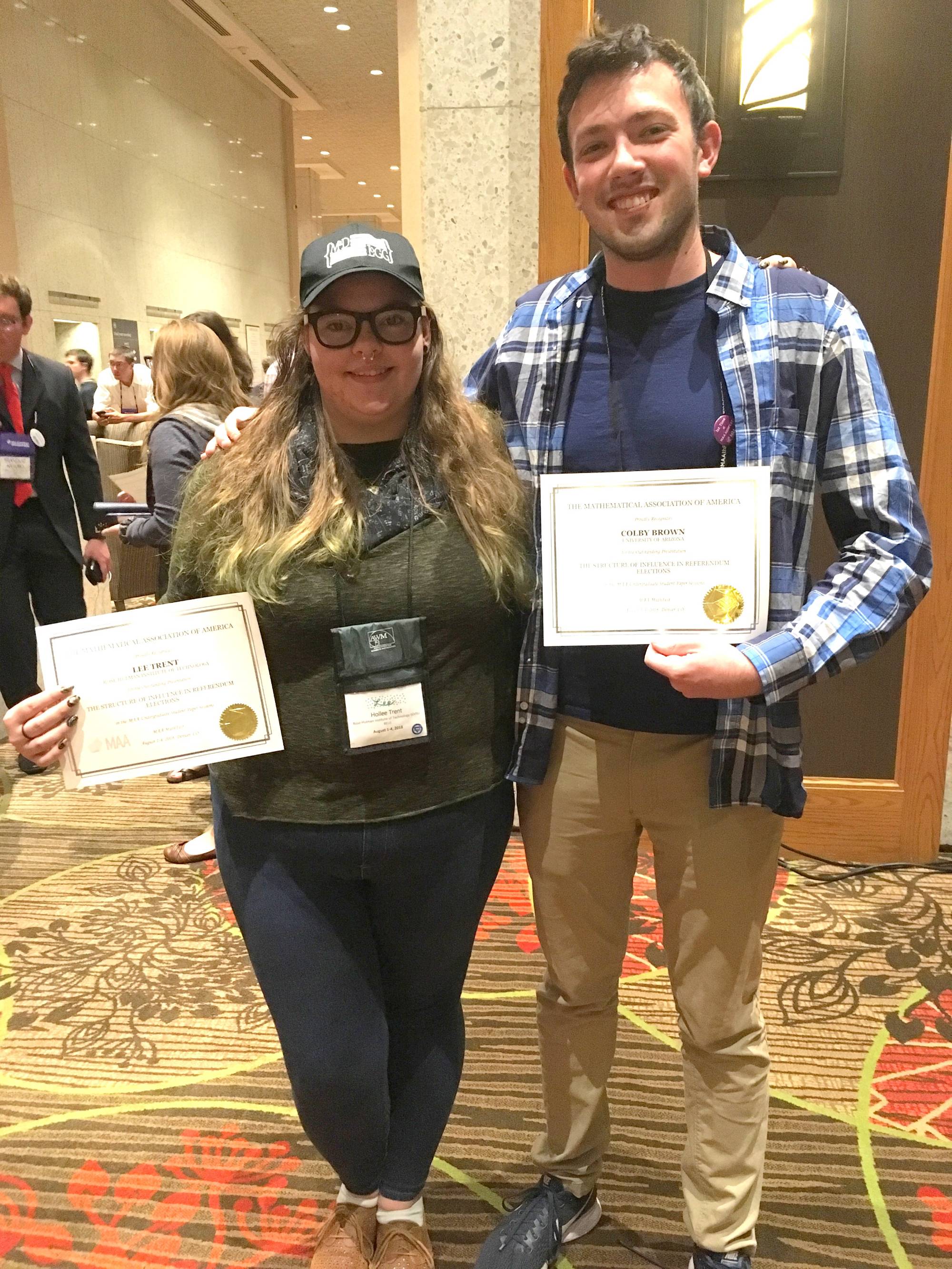 Each of these groups won an MAA Outstanding Presentation Award for their MathFest talks. 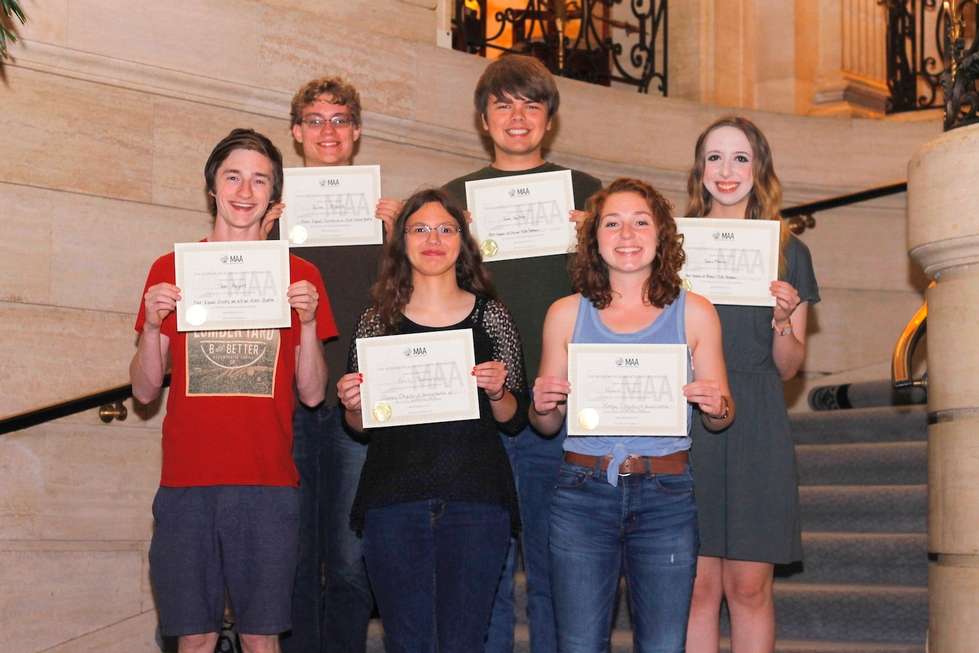 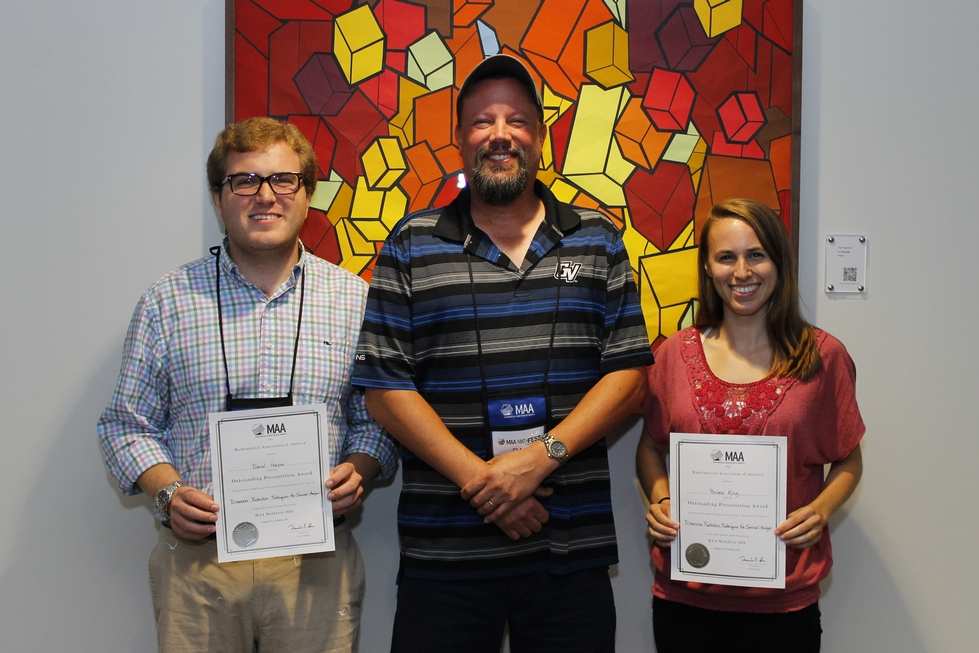 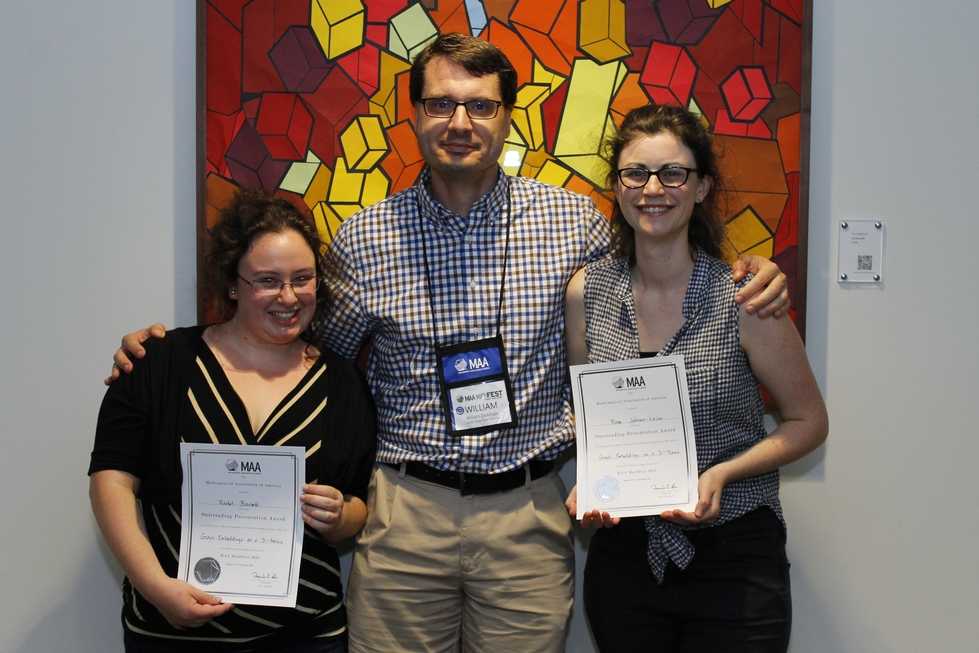 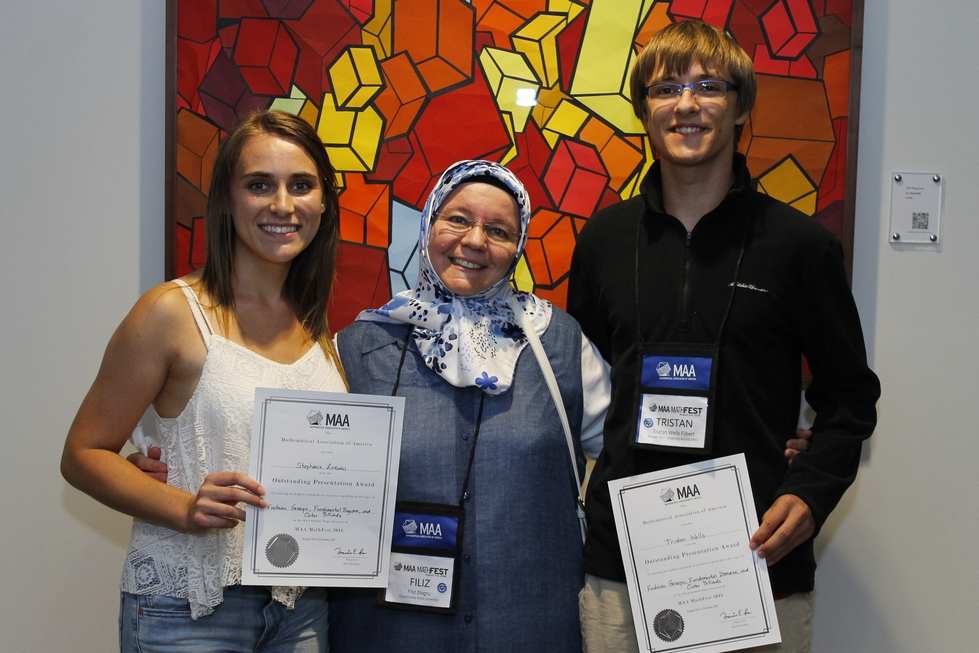 In March, more than 15 years after they worked together in 2000, one of the groups from the inaugural REU had an impromptu reunion when Amanda Cox, now a Graphics Editor at the New York Times, gave a talk at GVSU. Amy Oostdyk and Prof. Ed Aboufadel joined her for this picture. 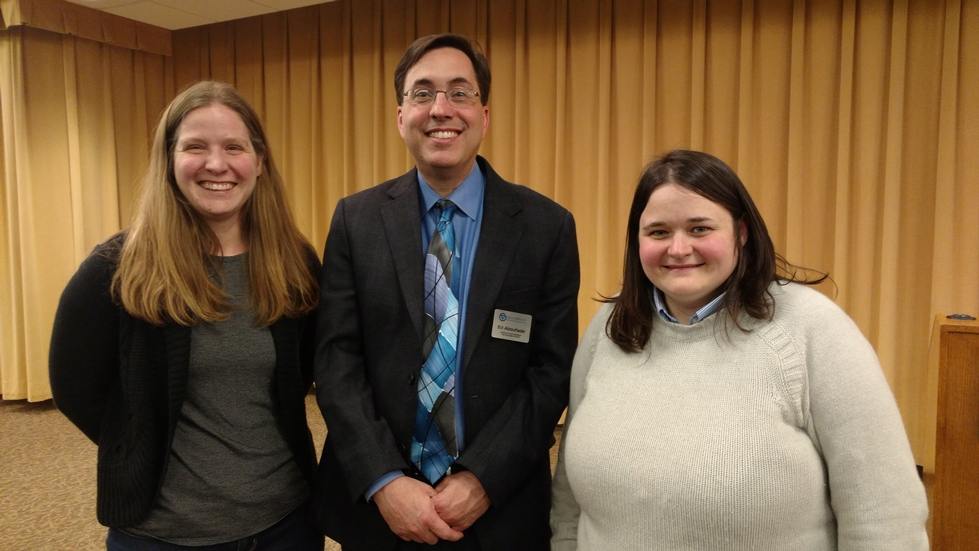 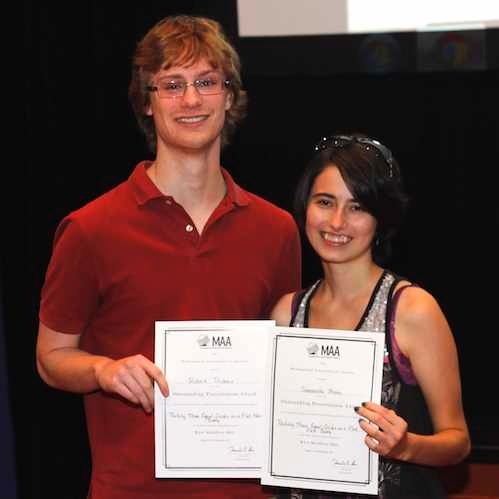 Robert Dickens and Samantha Moore won an Outstanding Presentation Award from the MAA at MathFest in Washington, DC. They were mentored by Prof. Will Dickinson. 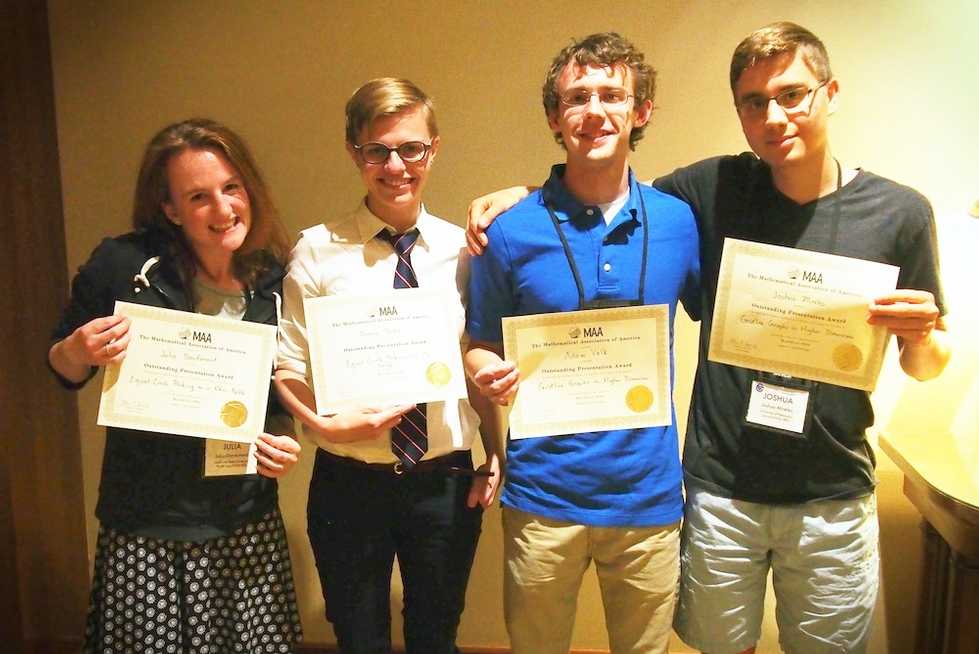 2014 REU students Pallavi Aggarwal and Ryan Swartzentruber and Prof. Steve Schlicker have had a paper, "Pythagorean Orthogonality of Compact Sets", based on their summer work accepted to Involve.

2013 students Sylvanna Krawczyk and Melissa Sherman-Bennett, mentored by Prof. Aboufadel, have written a primer on 3D printing as a part of their summer project. A link to a webpage with extra files related to 3D printing can be found here, and their professional paper can be found here.

2013 students Beth Bjorkman and Sean Gravelle won the SIAM (Society of Industrial And Applied Mathematics) Award for their talk at Mathfest in Hartford, CT on "Graph Theoretic Models of Interdependent Preferences in Referendum Elections."

Two groups of students from the 2012 REU won MAA Outstanding Presentation Awards for their talks at Mathfest in Madison, WI. Matt Brems and Alex Wagner worked with Prof. Will Dickinson on equal circle packings on Klein bottles. Lindsey Brown and Hoang Ha worked with Prof. Jonathan Hodge on single-peaked preferences in referendum elections. In addition, the team consisting of Hoang Ha, Lindsey Brown, Sean Meehan, and Matt Brems took second place (out of 10 teams) in the Face-Off game show on the opening night of Mathfest.

2011 REU students Nathan Marculis and SaraJane Parsons won an outstanding presentation award from the MAA for their presentation at the 2012 Joint Mathematics Meetings Undergraduate Poster Session in Boston, MA. They worked with Prof. Ed Aboufadel on using smartphones to detect potholes.

2011 REU student AnnaVictoria Ellsworth attended the Enhancing Diversity in Graduate Education (EDGE) program at Pomona College during the summer of 2012 and she will attend graduate school in mathematics at Iowa State University in the Fall.

2011 REU students Nathan Marculis and SaraJane Parsons, along with their advisor, Prof. Ed Aboufadel, won a significant cash prize from InnoCentive for successfully solving the City of Boston's challenge to develop an algorithm to detect potholes using smartphone data. They were assisted by programming guru Clark Bowman, also part of the 2011 REU. The group's work was also featured in Science magazine. Click here for more information this story.

2011 REU students Clark Bowman and Ada Yu won an outstanding presentation award from the MAA at the 2011 Mathfest in Lexington, KY. They worked with Prof. Jonathan Hodge on iterative voting methods and the separability problem in referendum elections.

2008 REU students Geoff Patterson and Emily Marshall, along with their mentor, Prof. Jonathan Hodge, were awarded the MAA's George Pólya Award for their paper Gerrymandering and Convexity.

2005 REU student Samuel Kolins earned his PhD from Cornell University in 2011 and accepted a position at Lebanon Valley College.

2008 REU student David Montague was awarded a Churchill Scholarship to study at Cambridge University during the 2011-2012 academic year.

2010 REU students Faye Stevens and Jamie Woelk won a SIAM award for their presentation at the 2010 Mathfest in Pittsburgh, PA. They worked with Prof. Jonathan Hodge on mathematical modeling of rank disequilibrium in multiple-criteria evaluation schemes.

REU students won several awards at the 2009 MathFest in Portland, Oregon. Katherine Varga won an outstanding presentation award from the MAA. Katherine worked with Ana Burgers and Prof. Shelly Smith to study Greater-Than Sudoko. Lisa Moats and Kyle Golenbiewski also won an outstanding presentation award from the MAA. They worked with Prof. Jonathan Hodge on the mathematical modeling of cost-conscious voters. Derek Olsen and Rob Castellano won the Janet L. Anderson Prize for Undergraduate Research in Mathematical or Computational Biology. They worked with Prof. Edward Aboufadel on a mathematical analysis of glucose data from type 1 diabetics.

In Madison, WI, at the 2008 MathFest, Emily Marshall and Geoff Patterson won an award for their talk on detecting gerrymandering and producing optimal congressional districts. They worked with Prof. Jonathan Hodge. 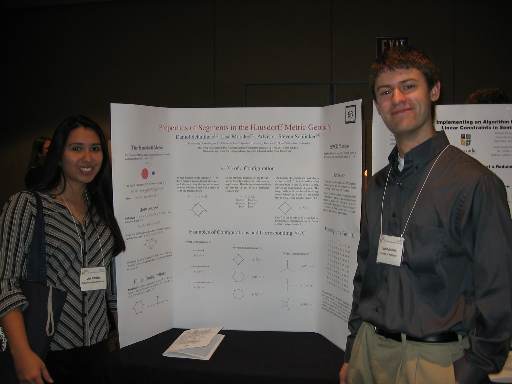 At the Student Poster Session at the 2007 Joint Mathematics Meeting in New Orleans, Dan Schultheis and Lisa Morales, who worked with Prof. Steve Schlicker, won an award for their poster "Properties of Segments in the Hausdorff Metric Geometry." Lisa also won the 2007-2008 President's Council Scholarship, which is the most prestigious scholarship at her university.

At the 2007 MathFest in San Jose, CA, Hanna Komlos won an award for her talk on dual billiards. She worked with Daniel Gorski and Prof. Filiz Dogru. Katrina Honigs and Vincent Martinez also won an award for their talk on their work on the Hausdorff Metric Geometry. They worked with Prof. Steve Schlicker.

A participant wrote to us: "On that note I want to thank you again for choosing me for the GVSU REU. At my interview for the scholarship they asked me what the pivotal moment in my college career was that made me decide to go to graduate school and I definitely believe that it was attending the REU. Upon returning to school I became much more motivated to get involved in the mathematical community and strive for greatness so again thank you."

At the 2006 MathFest in Knoxville, Amanda Taylor and Christy Hediger, who worked with Prof. Will Dickinson this summer, won one of the seven MAA awards for their talk "San Gaku and Other Problems in Various Geometries".

A faculty member who wrote a letter of recommendation for one of our REU students wrote to us: "He absolutely loved working with you and your program. He ... felt like your program really worked at helping him prepare to present his work and progress to peers and other faculty. He said the GVSU REU was one of the best experiences he has ever had. From what he said, and how he said it, it was clear to me that he really felt like he was a part of a team this summer and that he still feels connected to the mathematical community. I just wanted to say thank you for mentoring him this summer and continuing to work with him as your team of three submits your results for publication."

Three of the participants in the 2005 REU were recognized at the 2005 MathFest in Albuquerque. Samuel Kolins received one of the "best student talks" awards from the MAA for work he did with Justin From, another 2005 REU participant, and Prof. Matt Boelkins. Also, the Council on Undergraduate Research gave out two awards at MathFest, and both awards went to GVSU REU students: Chantel Blackburn and Alex Zupan received the awards for the best student research talks at the Pi Mu Epsilon and MAA sessions, respectively. They both worked with Prof. Steve Schlicker.

Matthew Katschke, one of the participants in the 2004 REU, was recognized at the 2004 MathFest in Providence, RI for his presentation on research he did with Jodi Simons, another 2004 REU participant. He is pictured with other student researchers, and Benoit Mandelbrot, in the December 2004 issue of Focus. Both students worked with Prof. Will Dickinson.

One of our participants from the 2003 REU, Christopher Bay, has won two awards for his work on the Hausdorff Metric with Prof. Steven Schlicker. Bay was one of a select few students to receive an award for a presentation at the 2003 MathFest in Boulder, Colorado. He was also one of several students to be recognized for the excellence of his poster at the 2004 Joint Mathematics Meetings in Phoenix, Arizona. In March 2004, Christopher was awarded a Goldwater Scholarship.

An article about the GVSU REU, written by Edward Aboufadel and Steven Schlicker, can be found In the February 2004 issue of Math Horizons.

A participant from the 2002 REU, Lisa Driskell, won the Annual Greg Mellen Memorial Cryptology Scholarship Prize from Cryptologia. Her article "Wavelet-Based Steganography" appears in the April 2004 issue of that journal.


Page last modified April 16, 2020
Report a problem with this page