In 2001, Sylvia Kaufman brought together a group called the West Michigan Academic Consortium in order to extend the work of the West Shore Committee for Jewish-Christian Dialogue and the Kaufman Interfaith Institute. The mission of these groups is to provide programming that leads to greater interfaith understanding and mutual acceptance.

2022: Judaism, Christianity, and Islam: How do our Faiths Shape our Prejudices and our Ideals?

Dr. David Nirenberg, author of numerous books on the history of Jewish, Muslim, and Christian relations, will be returning to our area following his distinguished career at the University of Chicago where he was a Distinguished Professor and Dean of the Divinity School.  This year he was appointed Director and Leon Levy Professor at the Institute for Advanced Study. He delivered two lectures.

Race and Religion, in History and Today

The lecture explored how contemporary Christian white supremacist groups read certain passages of the Bible, and how similar attitudes are shared with strands of other faith traditions. It also examined where these attitudes developed in the ancient world, and why they proved so powerful, as well as what this implies about the interaction between religion and racism today.

Anti-Judaism Past and Present

From their earliest origins to the present moment, Christians and Muslims have given shape to their faiths by interacting with and thinking about Jews and Judaism. How has that long history of thought contributed to anti-Semitism in the past and present? And what can the study of that history offer the future? 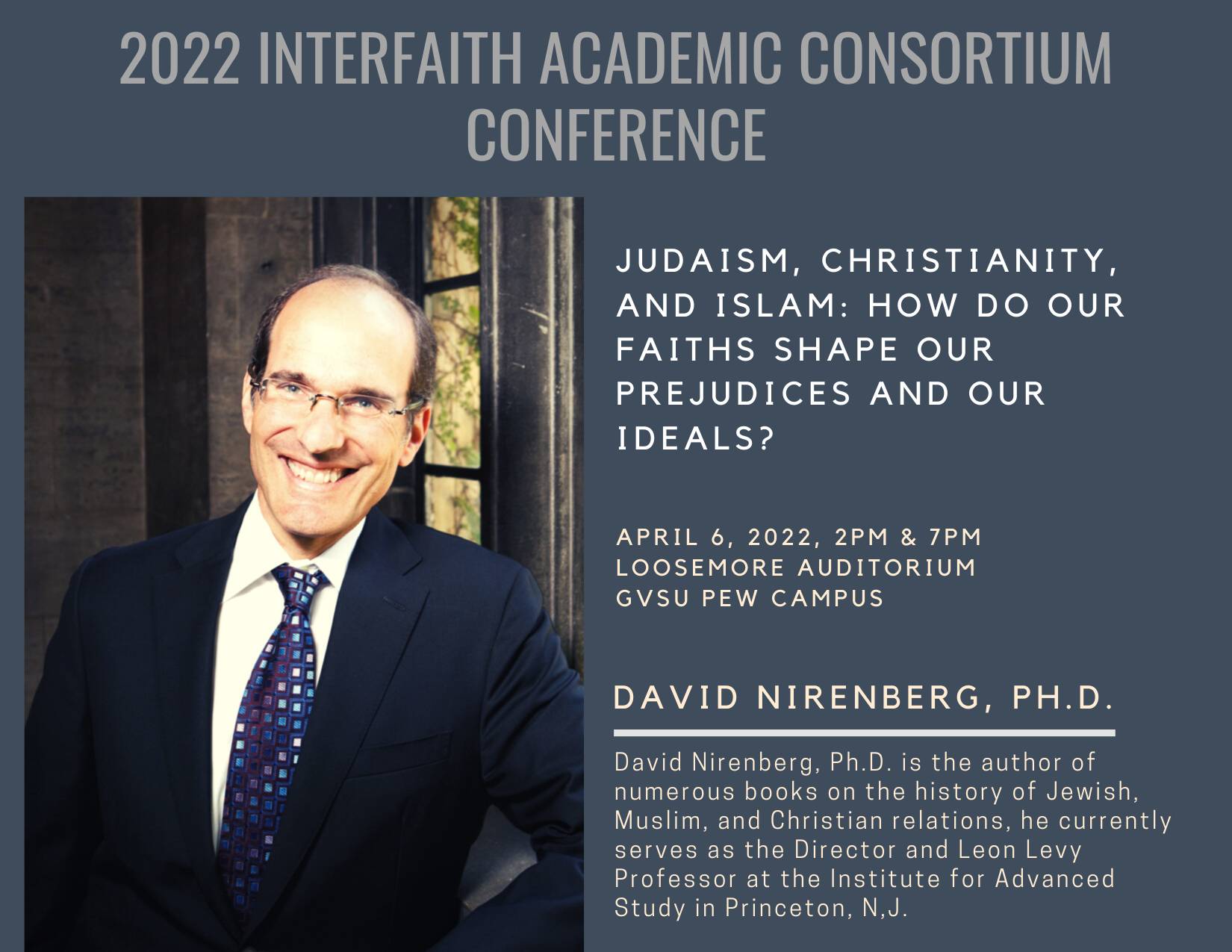 Race and Religion, in History and Today

Anti-Judaism, Past and Present

On October 30, 2019, we hosted Dr. Elaine Pagels as the featured speaker. She gave two lectures, the first being "What do 'secret gospels' suggest about Jesus and his teaching?" which was followed by a panel discussion with Robert Van Voorst, Professor Emeritus of Western Theological Seminary, Sheldon Kopperl, Professor Emeritus, GVSU, Diane Madoush-Pitzer, Professor of Religious studies, GVSU with Douglas Kindschi, Kaufman Interfaith Institute's director, moderating.

The evening session was a conversation between Dr. Pagels and Calvin University's Frans van Liere which focused on her latest book, "Why Religion: A Personal Story" in which she reflects on the persistence and nature of belief and why religion matters in the wake of her own great personal tragedy: the death of her young son, followed a year later by the shocking loss of her husband.

Dr. Pagels is an American religion historian. She is the Harrington Spear Paine Professor of Religion at Princeton University. Pagels conducted extensive research into early Christianity and Gnosticism as a part of her graduate study at Harvard University. Her best-selling book The Gnostic Gospels examines the divisions in the early Christian church, and the way women were viewed throughout Jewish and Christian history. Modern Library named it one of the 100 best books of the twentieth century. 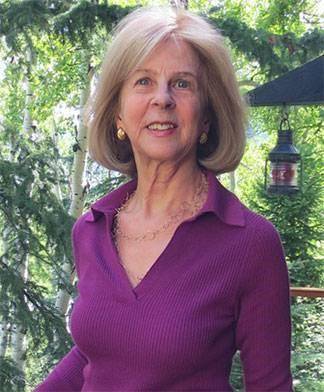 "Why Religion" - a discussion with Frans van Liere

What do "secret gospels" suggest about Jesus and his teaching?

2017: CAN RELIGIONS COLLABORATE FOR THE COMMON GOOD?

Dr. Appleby is the Dean of Notre Dame’s Keough School of Global Affairs and an expert on global religion, focusing on its relationship to peace and conflict and integral human development. He is co-chairing the Chicago Council on Global Affairs’ Task Force on Religion and the Making of U.S. Foreign Policy, which released the influential report, “Engaging Religious Communities Abroad: A New Imperative for U.S. Foreign Policy.” Appleby’s research examines various ways in which religious movements and organizations shape, and are shaped by national, regional and global dynamics of governance, deadly conflict, international relations and economic development. Appleby has authored 15 books, some of which include: The Fundamentalism Project (co-edited with Martin E. Marty and published by the University of Chicago Press), The Ambivalence of the Sacred: Religion, Violence and Reconciliation, and most recently, The Oxford Handbook on Religion, Conflict and Peacebuilding, co-edited with Atalia Omer. He also serves as lead editor of the Oxford University Press series “Studies in Strategic Peacebuilding.”

Dr. Levine is the University Professor of New Testament and Jewish Studies, E. Rhodes and Leona B. Carpenter Professor of New Testament Studies, and Professor of Jewish Studies at Vanderbilt Divinity School and College of Arts and Sciences. She has held office in the Catholic Biblical Association, the Association for Jewish Studies, and the Society of Biblical Literature. Dr. Levine’s lecturing on understanding Jesus in his Jewish context corrects false stereotypes, brings new meaning to his piety, politics, practices, and prayers, and offers a new path for Jewish-Christian relations.

Her books include: The Misunderstood Jew: The Church and the Scandal of the Jewish Jesus, the edited collection, The Historical Jesus in Context, and the thirteen-volume edited series, Feminist Companions to the New Testament and Early Christian Writings. Co-author of The Meaning of the Bible: What The Jewish Scriptures and the Christian Old Testament Can Teach Us. She was co-editor of the Jewish Annotated New Testament and co-authored book, The New Testament: Methods and Meanings. Her most recent book is Short Stories by Jesus: the Enigmatic Parables of a Controversial Rabbi. 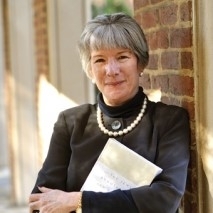 Dr. Schweiker is the Director of the Martin Marty Center for the Advanced Study of Religion at the University of Chicago Divinity School and an expert in the field of theological ethics. His scholarship and teaching engage theological and ethical questions attentive to global dynamics, comparative religious ethics, the history of ethics, and hermeneutical philosophy. A frequent lecturer and visiting professor at universities around the world, he has been deeply involved in collaborative international projects.

Dr. Mitchell is the Dean of the University of Chicago Divinity School and a literary historian of ancient Christianity. Her research and teaching span a range of topics in New Testament and early Christian writings up through the end of the 4th century, with a special interest in the Pauline letters, the poetics and politics of ancient biblical interpretation, and the intersection of text, image, and artifact in the fashioning of early Christian culture. Dr. Mitchell is the author of four books: Paul and the Rhetoric of Reconciliation (1991), The Heavenly Trumpet: John Chrysostom and the Art of Pauline Interpretation (2000), The "Belly-Myther" of Endor: Interpretations of I Kingdoms 28 in the Early Church (2007), and Paul, the Corinthians and the Birth of Christian Hermeneutics (2010). 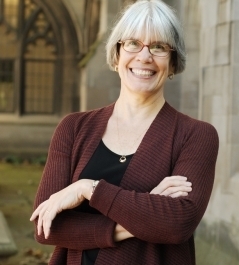 2011: THE PRESENCE OF THE RELIGIOUS "STRANGER"

He is currently the Fairfax M. Cone Distinguished Service Professor at the University of Chicago Divinity school. He is an ordained minister in the Evangelical Lutheran Church of America and is the author of over 50 books, including the 3 volume Modern American Religion (University of Chicago Press 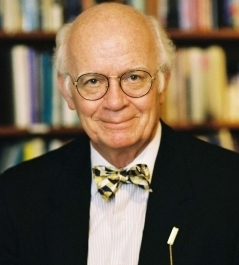 2010: ISLAM BEYOND THE HEADLINES

The Prophet We Never Knew

Omid Safi is director of Duke University’s Islamic Studies Center. He specializes in the study of Islamic mysticism and contemporary Islam and frequently writes on liberationist traditions of Dr. King, Malcolm X, and is committed to traditions that link together love and justice.

Omid is the past chair for the Study of Islam at the American Academy of Religion. He has written many books, including Progressive Muslims: On Justice, Gender, and Pluralism; Cambridge Companion to American Islam; Politics of Knowledge in Premodern Islam; and Memories of Muhammad. His forthcoming books include Radical Love: Teachings from the Islamic Mystical Traditions and a book on the famed mystic Rumi.

Omid is among the most frequently sought out speakers on Islam in popular media, appearing in The New York Times, Newsweek, Washington Post, PBS, NPR, NBC, CNN, and other international media.

2002 - BEFORE THE DIVIDE:  JEWS AND CHRISTIANS IN THE EARLY CENTURIES - Professor Paula Fredricksen

2001 - CAN JEWS AND CHRISTIANS EVER AGREE ON WHAT THE BIBLE MEANS? - Professor James Kugel


Page last modified April 22, 2022
Report a problem with this page