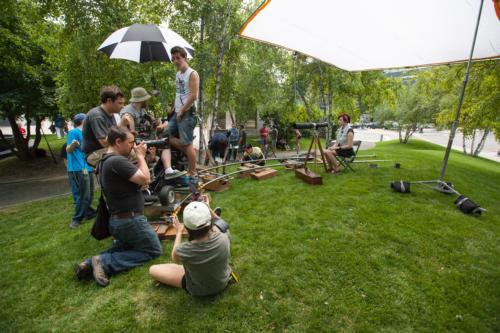 Joseph McCargar, affiliate professor of broadcasting, and Brian Gotberg, ’14 and ’15, are co-producing “The Lens.” Richard Brauer, president of Brauer Productions Inc., based in Traverse City, wrote the script and functions as director.

Brauer said the story revolves around a woman named Isabelle who buys an antique camera lens at a garage sale and discovers it has mystical powers of healing.

“Anything or anyone she photographs gets better. When she realizes that, it’s quite startling, but then almost immediately she also realizes that every time that phenomenon happens it pulls a piece out of her soul. So she’s faced with this moral dilemma of continuing her passion for healing knowing full well that it’s hurting her,” Brauer said.

Lewis Stone, senior film and video major and the film’s first assistant director, said among the many benefits of working alongside industry professionals on the Summer Film Project, there’s one in particular that helps prepare students for future careers in film and video production.

“The No. 1 thing this project gives to students is confidence and seeing how our skills and abilities can grow,” Stone said. “As first assistant director, I have to facilitate all departments and make sure everyone is working together and on time. Through that I know that after this project I can move on to more professional sets and do a really good job as first assistant director or in other roles in other departments especially as a director or screen writer, which is what I want to do in the future.”

The Summer Film Project was established in 1995 to offer junior and senior students and opportunity to work side-by-side with film industry professionals to produce a short film during a six-week practicum course during the summer semester. Post-production is completed during a 15-week fall course, with a premiere screening each spring.