In a crowd of 130, including many sets of identical twins, Brian Hereza was easy to spot.

Rather than bringing his brother, Hereza brought a large photo of Andrew, who was out of town April 6 when student and alumni twins gathered in the Fieldhouse for a celebration and photo shoot.

Brian and Andrew are triplets; their brother, Matthew, died shortly after birth. “We still feel a connection to our brother,” said Brian, a business major from Saginaw.

The Herezas were among 103 sets of twins enrolled at Grand Valley last year. University Communications and Alumni Relations figured that number itself was cause for celebration and invited them all to a party. The event drew 52 sets of student twins, 12 sets of alumni twins and featured appearances by President Thomas J. Haas and Louie the Laker. 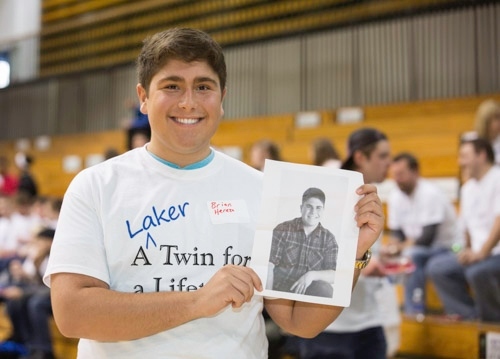 Brian Hereza holds a photo of his twin, Andrew, at a celebration of
Laker twins in the Fieldhouse. There were 103 sets of twins enrolled
at Grand Valley last year.

Throughout the day, the twins talked about their connection to each other, often citing it as the reason they both came to Grand Valley.

Laine and Leah Girard, from Eastpointe, said their sibling relationship was similar to a marriage. “People don’t understand the connection we have to each other,” Leah said. “We work hard on nurturing our relationship.”

Leslie and Natalie McComb, from Lansing, may not dress alike anymore but they couldn’t fathom attending different colleges. “We considered going to different colleges, but our mom said we would miss each other too much,” Leslie said.

As young girls, Leslie and Natalie dressed in the same style of outfits but Leslie was always in pink while Natalie wore blue. The sisters said they played the same sports and had the same friends during high school.

Some twins played on the same team as Lakers. Dan and Tom Hosford graduated from Grand Valley in 2002 and 2003, respectively. They both played football for Grand Valley’s first national championship team in 2002.

Dan said that he and his brother felt very lucky to attend Grand Valley together, continuing the legacy set by their late father, Jamie Hosford, who earned 12 varsity letters during his Laker years (1973-1977). 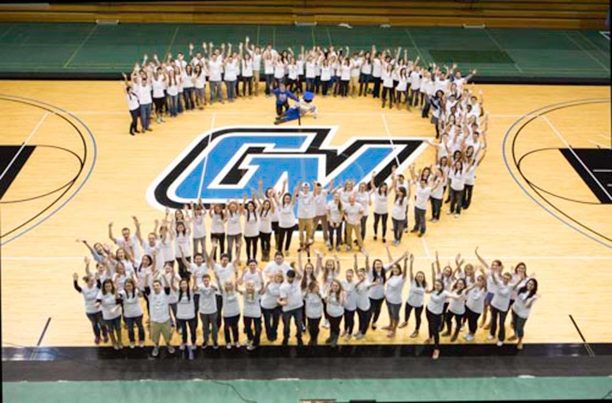 Page last modified January 17, 2017
Report a problem with this page