Campers get taste of college life at sports camps

More than 2,000 campers, ages 4-18, spent part of their summer at Grand Valley, participating in one or more of the 50 athletic camps hosted by 12 Laker teams.

While campers learned to improve their athletic skills, they also got a taste of college life by sleeping in living centers and eating in campus restaurants. And maybe some solidified their decisions about college.

“I went to golf camp throughout high school at CMU. I was familiar with the campus, the buildings, the facilities,” Ashcraft said. “When it came time to decide where to go to school, the decision for me was easy.”

“Part of what helps us attract players and other students to Grand Valley is the university’s outstanding academic and athletic facilities and the success we have had as a team,” Johnson said. 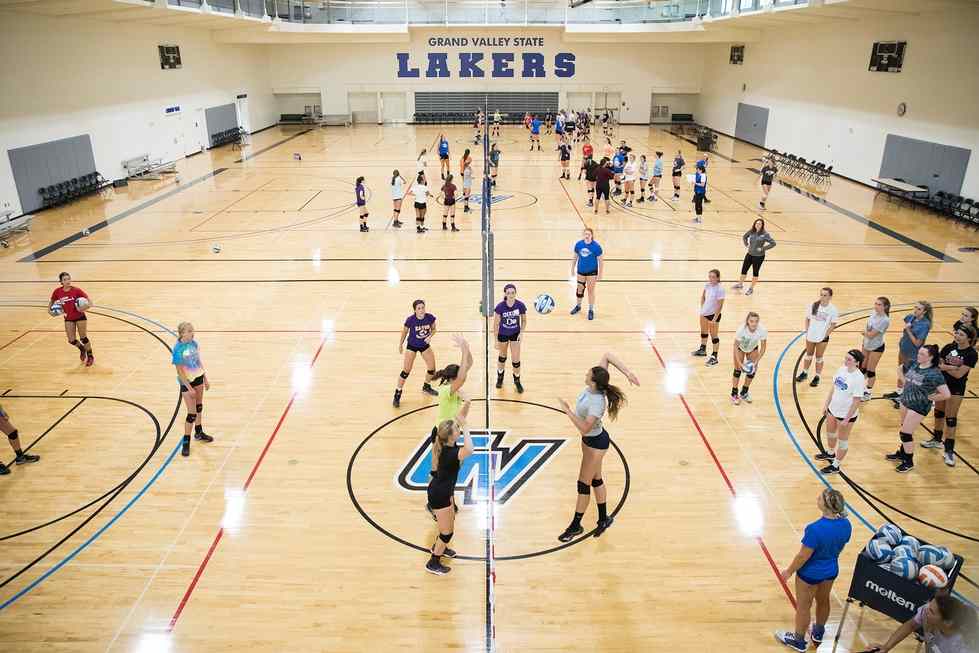 “Part of what helps us attract players and other students to Grand Valley is the university’s outstanding academic and athletic facilities and the success we have had as a team,” Johnson said.

Johnson said teams schedule their camps to include time for team-bonding sessions. “Many teams headed to Lake Michigan for a little relaxation and bonding during their time here,” he said.

Camps are typically shorter now than what was the trend a decade ago, Johnson said. When he first began managing a summer’s worth of sessions, campers would stay for four or five days. “Now, it’s more one- and two-day camps. The high school players want a chance to get to four or five different colleges in a summer,” he said.

Like their peers in other varsity sports, Laker volleyball players have a big role in making a summer camp session successful. Players help with drills, daily operations and monitor living centers at night with housing staff members.

Each camp includes a Q&A session with current players, Johnson said. “For the fifth and sixth graders, they’re developing a love and passion for the sport, and they look to our players as women role models,” he said. “The high school players are interested in how to schedule classes and practice time, and what it’s like to be recruited.”

New to the summer schedule this year was a high school coaches camp; about 100 participants listened to national speakers and participated in professional development and leadership sessions.

Learn more about the camps at grandvalleystatesportscamps.

'Anchor Up' by Tim Selgo

In a book published in May, Selgo weaves Laker stories into a guide for athletic administrators and others who aspire to lead from within an organization.

With a forward by Notre Dame head football coach Brian Kelly, Anchor Up: Competitive Greatness, the Grand Valley Way is available for $25 from Five Count Publishing, fivecountpub.com/anchorup. Five Count Publishing will donate 10 percent of all sales to the Don Lubbers Excellence in Athletics Facilities Fund. Books are also available at Laker Stores on campus.


Page last modified August 14, 2017
Report a problem with this page