Janecke set to lead cross country team back to championships

Jessica Janecke will return this fall to the Laker women’s cross country team for a fourth season and perhaps a fourth opportunity to run in the NCAA Division II championships.

In the past three seasons Janecke has finished third, ninth and fourth at the national championships, leading the Lakers to team titles in each of those years. Considering that Janecke was neither an experienced high school runner, nor someone who was heavily recruited, makes her top 10 finishes more remarkable.

“In high school I ran track and was more of a sprinter,” Janecke said. “I only ran cross country as a senior.” 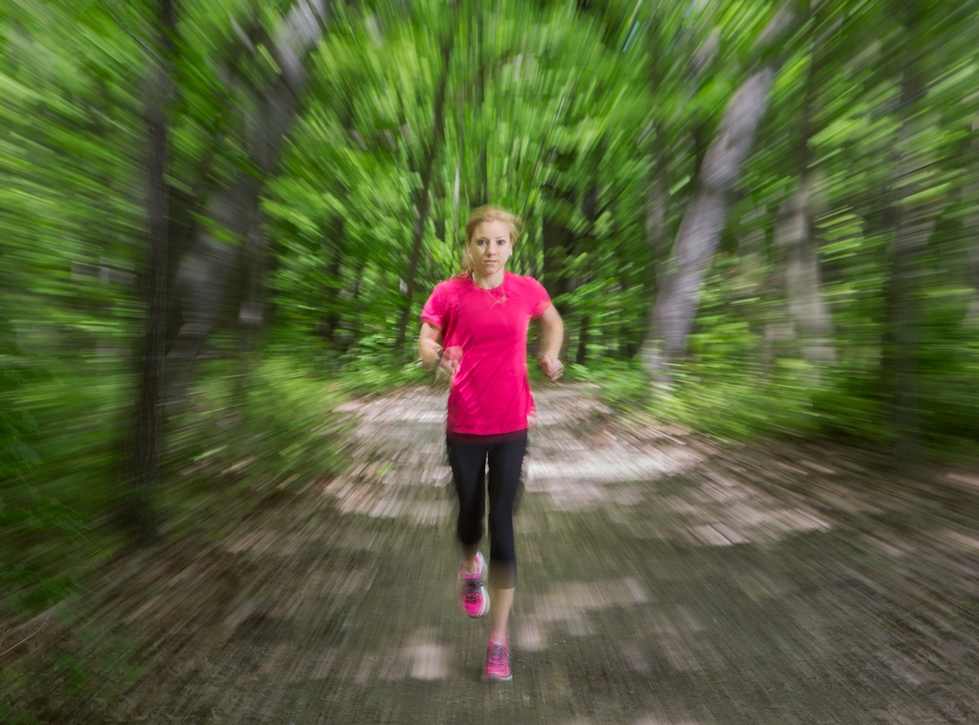 Jessica Janecke runs in the Ravines on the Allendale Campus. She will lead the women's cross country team this fall in its quest for a fourth NCAA championship.
photo by Amanda Pitts

Janecke is from Scales Mound, Illinois, and found her way to Grand Valley because her sister lives in southwest Michigan. Once she decided to apply, Janecke sent a video package to head cross county coach Jerry Baltes, asking if she could try out for the team.

Baltes said he noticed her skill and work ethic early. “She never cut anything short and always put forth her full effort with a great attitude,” he said.

Her first year on campus was a redshirt year for Janecke, meaning she could practice with the team but not run in a Grand Valley uniform at meets. “I ran unattached, in my own T-shirt and shorts. I paid my own way at meets, I couldn’t ride with the team or eat meals with them,” she said.

Janecke’s unattached times were competitive with seasoned runners and her redshirt year allowed her to mature, a plan Baltes had from the start. “Jerry has a great mentality when talking to freshmen,” she said. “It’s not, ‘Let’s make you into a national champion and you will carry our entire team.’

“He knows your strengths before you know, and eases you into it, so you don’t peak too soon.” Janecke’s third place time at the NCAA championships last season in Kentucky was 21:14.7.

Janecke also has one more season of eligibility for outdoor track; she runs the 5K and the 10,000-meter run. She graduated in April with a bachelor’s degree in biomedical sciences and will begin graduate school at Grand Valley this fall in the master’s of social work program. Once on track to become a dentist, Janecke said her path shifted largely because of a course that focused on community nutrition.

“We had a series of speakers come into that class and discuss how they get fresh food and produce to people who have lower incomes,” she said. “I suddenly saw myself wanting to do that. I really wanted to be involved, working alongside other people.”

Last summer, Janecke was an intern at two Grand Rapids nonprofits: Dégagé Ministries and Heartside Gleaning Initiative. At Dégagé she helped in the women’s shelter, and for Heartside Gleaning, Janecke and others would work with Grand Rapids Downtown Market merchants to collect their donated fresh food and bring it to those in need.

While new to the nonprofit world, Janecke said the leadership skills she has developed by being a student-athlete have helped immensely as she worked with new organizational teams. “I tend to surface as a leader and I’m someone who likes to be very organized,” she said. “In social work, this translates well as I’m going to be speaking for people who can’t speak for themselves.”

Baltes agreed. “In my 18 years of college coaching, Jess is at the top in regards to what a team leader and total team person truly represents. She does everything for the good of the team even if it means she takes a back seat,” he said.


Page last modified December 20, 2016
Report a problem with this page