Pardon the cliché but senior Moriah Muscaro is ready to pass the baton.

Muscaro is a third-generation baton twirler who many Laker fans will recognize from her performances as the featured twirler during football or basketball games. Others may have passed by one of her regular two-hour practice sessions in the Recreation Center. A few lucky people may have watched her compete at national baton twirling events. 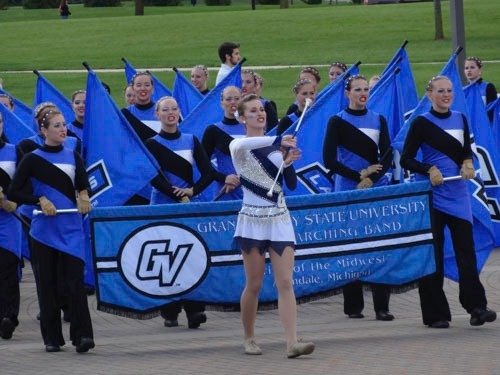 The upcoming football and basketball seasons will be the last for Muscaro, an honors college student who plans to go to medical school, and she expects the year to be full of bittersweet emotions.

“It will definitely be very emotional because baton has given me so much,” said Muscaro, who is majoring in biomedical sciences. “I’ve had the opportunity to travel and — because you have to interview for judges at competitions — I’ve learned so many life skills and now have the confidence to handle medical school interviews.”

Muscaro and Laker Marching Band director John Martin are searching for another new featured twirler for 2015. Martin said he suspects the search will be tough.

“Her performance standards have raised the bar for everyone, including myself,” said Martin, assistant professor of music and director of athletic bands. “There are very few individuals in the country like Moriah who consistently perform with technical precision and artistic grace.”

While twirling a baton (or multiple batons) has been part of Muscaro’s life since she was 5, she said she’s ready for someone else to be in the spotlight. “It will be hard to be done with baton when this year is over,” she said. “I’m so glad I can keep teaching others to bring up the next person. It’s time for the next person to succeed.”

Muscaro is the current College Miss Majorette of Michigan and the Great Lakes. She won seven national championships last summer, and defended those titles in July at the University of Notre Dame, site of the National Baton Twirling Association championships. Muscaro won the Collegiate National Championship and qualified individually and will represent the United States in Italy next spring at the World Baton Twirling Championships.

The summer nationals cap an intense baton season. Muscaro, who works with six coaches to perfect her routines (including one with batons on fire), travels nearly every weekend during the late winter and spring.

Despite the family history, Muscaro laughed when she recalled her entry to the sport. “I didn’t like it at first, my mom was giving me lessons. Then she recruited a bunch of my friends for group lessons and I tried it again,” she said.

Rhonda now directs the Twirl-M’s (for Moriah), a group of twirlers ages 4-20 who are often seen at Oakland County parades and other community functions. Muscaro estimated that her mother and other Twirl-M’s staff members have taught baton lessons to about 800 kids.

In high school Muscaro was on the majorette line for Walled Lake Northern. She auditioned for Martin on the same day she had to interview and complete an essay for a Meijer Honors College scholarship. “That was a really big Grand Valley day,” she said.

Muscaro said growing up in the sport of baton twirling has taught her an excellent work ethic. “School has always been my No. 1 priority. Since high school, my parents have pushed me to work ahead and use every moment of my time,” she said.

Her method works: Muscaro will carry a 4.0 GPA into her senior year. 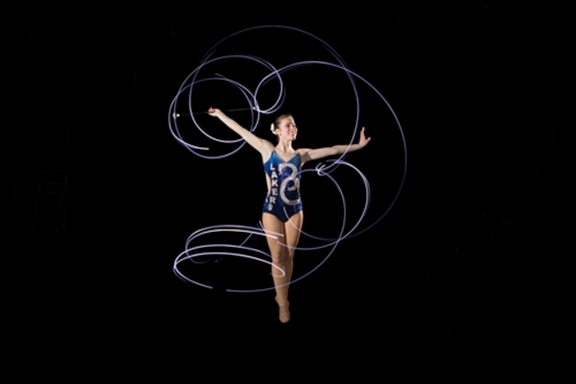 Moriah Muscaro is pictured with LED lights on her baton.


Page last modified August 5, 2014
Report a problem with this page