Three new head coaches joined the Laker staff this year, and each takes over a program from a well-established leader.

Jeff Hosler was introduced to the Laker community in June, replacing Dave DiIanni, who was named head coach at the University of Iowa. Hosler spent eight years as head coach at Alma College. At Grand Valley, he inherited a program that won its third
national championship in five years, and said that is partly what piqued his interest in the position.

“The soccer program’s success on the conference, regional and national level is undeniable and I feel very fortunate to be provided this opportunity,” Hosler said. “The level of play is fantastic and I’m very excited to be working with these elite athletes.”

When he began working at Alma, the Scots had only three winning seasons. He said that made recruiting difficult, but only slightly. “The recruits saw our passion for the game, hunger for success and that we genuinely cared about our players beyond the soccer field, and they came around,” he said.

They certainly did. During Hosler’s years as head coach, the Scots went 90-55-12, won a Michigan Intercollegiate Athletic Association title, conference tournament, and made an NCAA tournament appearance.

Hosler earned a bachelor’s degree in business from Alma College.

Dana Callihan is very familiar with Laker softball. She was the assistant coach for 13 years, working with head coach Doug Woods, who retired last season after 24 years.

Callihan earned four varsity letters as catcher/infielder for the Lakers. She graduated from Grand Valley in 1992 with a bachelor’s degree in industrial technology and later earned a master’s degree in sports administration from Central Michigan University.

Callihan said she and Woods complemented each other on the field well. “I tend to be more aggressive than Doug wanted to be,” Callihan said. “He was a big picture coach and I am more detailed.

“I learned many lessons from him that I hope to incorporate into my own coaching style.” 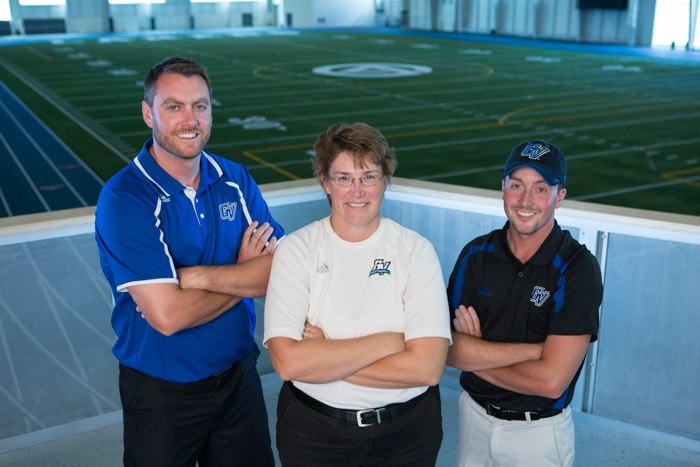 Bissell graduated from Ferris State University with a bachelor’s degree in marketing. As a student athlete, Bissell helped lead the Bulldogs to an NCAA Division II regional tournament. He finished his collegiate career with a 76.1 scoring average.

After graduating, Bissell worked as an instructor at Grayhawk Golf Club in Arizona, and has also led clinics and private lessons at Treetops Resort in Gaylord. He said his teaching background transfers well to the coaching arena.

“I find it extremely important to be well-versed in player development through improving their golf swings as well as statistical analysis to find weak points and turn them into strengths,” Bissell said.

He said making the decision to move into coaching was easy, if that position was at Grand Valley. “There is huge potential for recruiting at Grand Valley based on athletic success, nationally renowned academic programs and the beauty of the campus
itself,” he said.


Page last modified November 6, 2014
Report a problem with this page