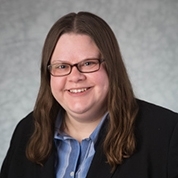 Dr. Carrie L. Buist received her B.S. and M.S. degrees from Eastern Michigan University in Criminology and Criminal Justice and her Ph.D. from Western Michigan University in Sociology with concentrations in Criminology and Gender and Feminist Studies. Dr. Buist’s current work focuses on Queer Criminology, having published the book, “Queer Criminology” in late 2015. In addition to her book (co-authored with Dr. Emily Lenning), Dr. Buist has articles published in Critical Criminology: An International Journal, the Journal of Culture, Health & Sexuality, and the Journal of Crime and Justice. Dr. Buist also has several published book chapters on topics ranging from media and pop culture’s influence on subjects from white collar crime to the social construction of gender, as well as LGTBQ experiences within the criminal legal system such as transgender issues in prison, and transgender victims and offenders.

Dr. Buist was recognized by the American Society of Criminology’s Division on Women Crime with their New Scholar of the Year Award in 2015.


Page last modified May 2, 2021
Report a problem with this page