Art in the Classroom 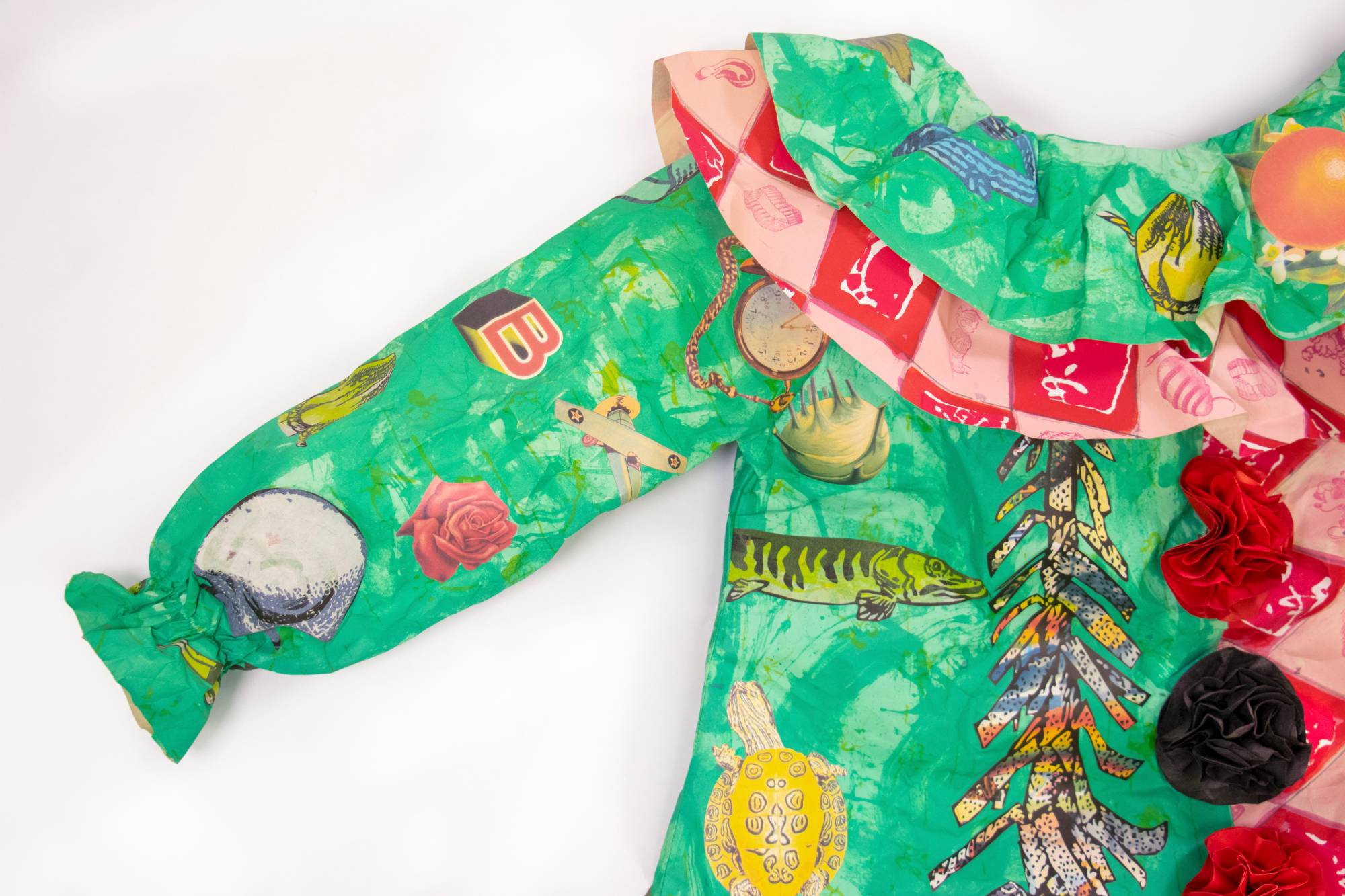 Since the late 1960s, contemporary art has sought to challenge boundaries and engage a world that is rapidly becoming culturally diverse, technologically developed, and globalized. In the United States, Chicago serves as an important center for this kind of art. By working with Chicago-based artists, gallery owners, and collectors, Grand Valley State University has purposefully developed a collection of contemporary art over the last 15 years.

Drawn from GVSU’s collection and enhanced with additional loans from Chicago, Art of Today celebrates Grand Valley’s desire to share compelling imagery with the community. The exhibition brings together more than 40 paintings, prints, drawings, photographs, sculptures, and mixed media. This curation includes both bold and minimalistic works exploring simplicity in design, our relationship to the environment, and the intersection of pop culture and art by artists Alex Katz, Ellsworth Kelly, David Nash, and Takahashi Murakami. Other artists, such as Tony Fitzpatrick, Jane Hammond, Erika Rothenberg, and Kara Walker, provide challenging imagery that examines the meaning of identity, race, culture, and sexuality.

For more information on the Fall Arts Celebration visit the website.

The planet Mars has fascinated humanity since early in human history. The Chinese observed it before 1000 BCE. The Egyptians knew of the red planet as well, and the Neo-Babylonian Empire was aware of it by the sixth century BCE. Mars enthralls us even more now because it is the only planet in the solar system that could support human life.
Beginning in the mid-1600s, scientists first created astronomical drawings of Mars. With the recent discoveries of the Curiosity rover and continued popularity of science fiction film and literature, people all over the world are engaged with the exploration and popular culture of Mars.

Mars: Astronomy and Culture brings together photographs, drawings, movie posters, book covers, and video projections and connects the recent scientific images of Mars to the entire history of photography of the red planet. Crucially, it shows the impact of Mars on popular culture even before the 20th century.

Mars: Astronomy and Culture is presented by the Grand Valley State University Art Gallery in partnership with the Center Art Gallery at Calvin College, and the Holland Museum.
This exhibition was curated by Pasadena Arts Council for the Williamson Gallery, Art Center College of Design, Pasadena, California. It is a project of the Pasadena Arts Councils EMERGE Fiscal Sponsorship Program.

GVSU professor Jim Goode and his wife, Virginia, have traveled the Middle East during the last 50 years. Their journeys, for work and pleasure, have taken them to 11 countries, from Afghanistan to Morocco. The Goodes have taken great satisfaction in introducing more than 100 Grand Valley students, faculty, staff, and friends to the peoples, cultures, and landscapes of this area of the world. Along the way, they acquired a wide variety of ceramics, rugs, textiles, and many other everyday objects. Very few of them were made for display; most represent simple instruments of daily life. This exhibition brings together a selection of these items and allows the visitor a glimpse of Middle Eastern culture as represented by the collection.

Goode has taught in the history department at Grand Valley since 1986 and founded both the Middle East studies program and the Model Arab League on campus. As a result of his commitment to teaching, leadership in study abroad programs to the Middle East, and contributions toward global learning at Grand Valley, Goode was awarded the Distinguished Service Award in 2006 and the Faculty Internationalization Award in 2015. Virginia Goode retired as office coordinator of the Chemistry Department in 2006.

Since 2008, the two universities have actively exchanged students and faculty through degree and study abroad programs, simultaneously broadening and strengthening a sense of international discovery, awareness, and understanding.

Dusk to Dusk: Unsettled, Unraveled, Unreal
August 28 – October 31, 2015
Fall Arts Celebration Reception: September 10, 2015
Welcome to a beautiful world, unsettling in its vision of personal isolation, but collectively bound by the small comfort of knowing that we are all alone. Through painting, photography, sculpture, and video this convincing aesthetic of anxious beauty shows us a strange contemporary familiarity in our collective darkness.

A collaborative project between the GVSU Art Gallery and the De Pree Art Center and Gallery at Hope College, this exhibition turns a mirror to our world, examining individual isolation, political repression, and collective ennui during the decline of the industrial age, an age in which people are simultaneously singular and collective beings.

Shared Passion: A Gift of the Stuart and Barbara Padnos Foundation Collection
Fall Arts Celebration Reception: September 30, 2014, 5:00 - 7:00 p.m.
Throughout their long marriage, businessman and philanthropist Stuart Padnos and his wife Barbara amassed a notable collection of art filling their waterfront home in Holland, Michigan. The collection served as an overview of both European and American art of the twentieth century and as a legacy to the couple’s evolving artistic aesthetic and wide range of interests. The couple’s shared passion for collecting joined notable international names such as Marc Chagall, Raoul Dufy, Joan Miro and Paul Emile Pissarro with American regionalist artist Thomas Hart Benton, Childe Hassam, Grandma Moses and Mathias Alten.

The Stuart and Barbara Padnos Foundation gifted a significant portion of the couple’s art collection to Grand Valley State University in 2013. Previously, in memory of his wife’s adventurous and open-minded spirit, Stuart Padnos established the Barbara H. Padnos International Scholarship for Grand Valley students. In 2005, Stuart established the Stuart and Barbara Padnos Chair in Art and Design to promote the teaching of art at Grand Valley, and the exhibition space in the Calder Art Center was named to honor the couple’s generosity and commitment to the arts.

Cyril Lixenberg:  An Artist’s Journey
Reception:  Wednesday, September 11, 2013, 5-7 p.m.
Cyril Lixenberg: an Artist’s Journey explored and celebrated 81 years of the life and work of the popular contemporary Dutch artist Cyril Lixenberg, whose monumental sculpture and eye-popping, colorful screen prints are exhibited throughout GVSU’s buildings and campuses. The exhibition featured new gifts of paintings and works on paper including drawings, mono-prints, print editions, small sculptures, and archival material spanning his early career as a struggling and evolving artist from the mid-1950s to the present.  Multiple exhibition venues across West Michigan simultaneously focused on particular aspects of Lixenberg’s art.   The venues were the Grand Rapids Art Museum, Muskegon Museum of Art, Calvin College, Center Art Gallery, and Saugatuck Center for the Arts.  GVSU’s exhibit ran from August 23 to November 1, 2013.  The exhibit program was supported by a generous gift from Larry and Elaine Ritowski Shay and, in part, by public funds from the Consulate General of the Netherlands in New York and a grant from the Netherland-American Foundation.

Forged in Metal: Deshi/Shisyou Mentee/Mentor
Reception: Thursday, October 4, 2012, 5-7 p.m.
Forged in Metal: Deshi/Shisyou Mentee/Mentor was a showcase of jewelry and metalsmithing work from a selected group of Japanese students and their mentors from Hiko Mizuno College of Jewelry, Tokyo. This inspiring exhibition was curated by Renee Zettle-Sterling, Associate Professor of Art and Design from Grand Valley State University, and James Bove, Associate Professor of Art at California University of Pennsylvania. Forged in Metal will shed light on a trusted and profound relationship whose impact is felt for a lifetime: the mentee/mentor relationship.  This exhibit was on view from October 4 to November 2, 2012

Mystic India, Land of Color and Tradition:  Folk Art and Miniature Paintings from Grand Valley State University
Reception:  Wednesday, October 7, 2009, 5-7 p.m.
India is the second most populous country in the world with over one billion people.  It has successfully managed to preserve their culture and traditions through a myriad of invading foreign influences, including central Asia and various European countries.  More than 60 pieces of Indain art were on exhibit in the GVSU Art Gallery, including minature court life painting, sculptures of major deities, multicolored folk art, and intricate inlaid marble works.  The exhibition focused on the stories and legends reflecting India's diverse cultures, as told through her many traditional art forms.  The artwork shown in Mystic India was a selection from the university's collections acquired during the course of two visits with members of the GVSU Friends of Art.  Their travels took them from Dehli to Agra, through the desert state of Rajasthan.  Along the journey, they sought local art forms in painting, sculpture, carving, and other crafts.   Exhibit was open from October 5 to October 30, 2009.

Separation as Together: Soonjung Hong and Eunmee Lee, Korean Ceramists at GVSU
Tuesday, October 7, 2008, 5-7 p.m.
Renowned Korean artists present work created during the first GVSU International Ceramic Workshop during this premiere exhibition that ran from October 7 to October 31, 2008.  Lee enjoys rough and large installation work, whereas Hong likes very delicate work. Though different in their styles, they live and work together in Heyri, a cultural village in the Paju province of their native Korea. Both of these artists enjoy an international reputation for their fine craftsmanship and blending of ancient techniques with new and innovative methods.

No Blind Date: A Two Person Exhibition
Reception:  Thursday, October 4, 2007, 5-7 p.m.
Artist statement:  “Jo Hormuth and John Phillips met on the phone during the summer of 1983. They have lived and worked together ever since.  John is a painter.  Jo works with everything else.  This was their first exhibition together.”  The Art Gallery exhibit ran from October 4 to November 2, 2007.

Jamaica Today: 6 Women Artists
Reception:  Thursday, October 6, 2005, 5-7 p.m.
This exhibit featured a group of highly talented artists with African, Asian and European backgrounds all of whom make Jamaica their home but whose visual vocabulary differs dramatically from one another as they express their insights of this island nation, showing from October 3 - November 4, 2005. Hope Brooks, Natalie Butler, Margaret Chen, Prudence Lovell, Petrona Morrison, and Hope "Sweetie" Wheeler featured works on paper and photography, installation and multimedia art in the GVSU gallery. All six women are high profile artists throughout the Caribbean and participate actively in exhibitions in the United States, Europe and Asia. All are faculty of the Edna Manley College of the Visual and Performing Art in Kingston, Jamaica.

Minimonumentalism/Heroes and Myths:  The Art of Dimitry and Daniel Kaminker
Reception:  Thursday, October 7, 2004, 5-7 p.m.
The work of Dimitry Kaminker, a St. Petersburg based sculptor and his son and partner Daniel Kaminker, also an award winning artist was on display from October 4 – 29, 2004.  Th e exhibit showcased the Kaminker’s work by presenting small scale bronze sculptures that serve as models for the artist’s monumental work found in major museums throughout Russia and Scandinavia.  While public sculpture in Russia  was long a source of propaganda, Kaminker has sought to change that image with pieces that have a human element and a touch of irony – “something that will make people smile.”


Page last modified October 10, 2019
Report a problem with this page