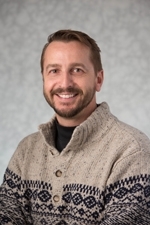 Bill Cuppy leads Grand Valley's video and multi-media production team, which produces a wide range of projects including produced videos, commercials, social media content, and live productions of Laker athletics on ESPN 3. Cuppy is an AP committee member at Grand Valley, and an active member of the campus community. Cuppy has been continuously connected with Grand Valley since enrolling as a freshman in 1988. He also spent time as a producer/director for WGVU-TV, and now serves as creative director. He also enjoys long walks on the beach.


Page last modified January 16, 2018
Report a problem with this page