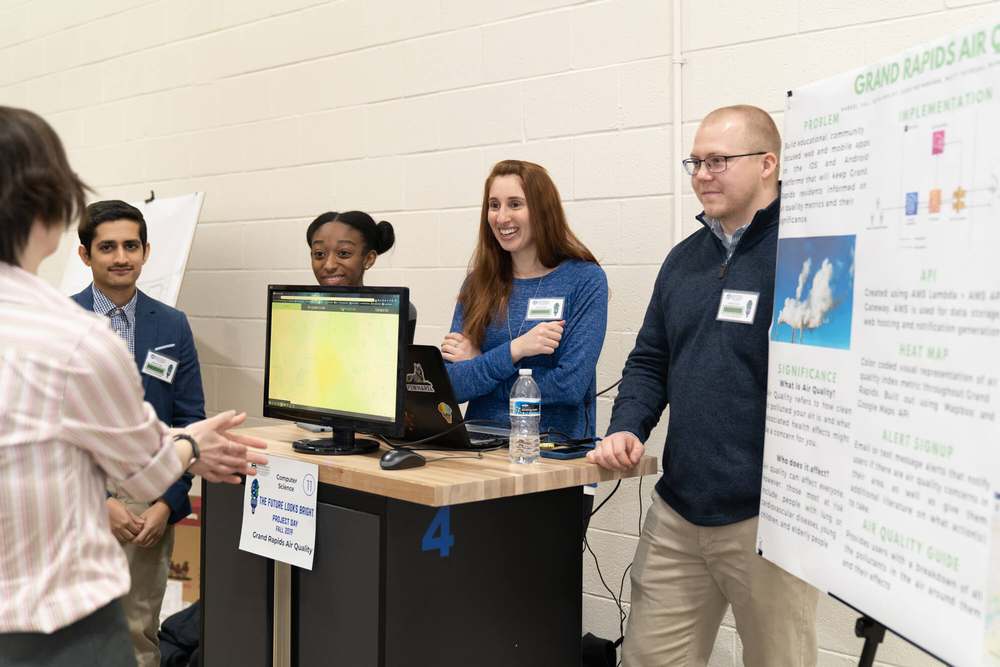 If you have ever wanted a robotic cooler to follow you around instead of carrying it, or been curious about how the air quality in your area of Grand Rapids is, Grand Valley engineering and computing students can help you out.

A robotic cooler that uses GPS to follow its owner and a computer visualization of air quality in Grand Rapids were just two of more than a dozen different projects that were showcased at the Padnos College of Engineering and Computing's Fall 2019 Project Day.

Project Day highlights the work done during the semester by students in courses across several disciplines, including computer science, information systems, IT, cybersecurity, occupational safety and health, and a wide range of engineering fields.

Other projects focused on blood glucose monitoring, a fit system for hearing protection, an app that would make it easy to pick up healthy recipe ingredients from a local grocery store, and many others.

Matt Tetreau, a senior and computer science major, worked on the team that built the Grand Rapids air quality display project, which was sponsored by Seamless IoT.  The app takes air quality samples from a database, and the program the students delivered takes that information and overlays an air quality map over a map of the city.

"When air quality is poor, it affects everyone, especially children, the elderly and people who are sick, so it's all about public health," Tetreau said.

Group members said visualizing the data was challenging, but that learning how to not only make the program work, but also how to package it as a finished project for the sponsoring organization was an excellent learning opportunity.

"The teamwork and communication with our sponsor, along with using a lot of soft skills that we didn't have to use as much in previous classes was definitely more real-world than any other work we've done," said group member Muna Gigowski. "It was definitely great practice for what we are expecting in the real world."

At the graduate level, three different teams were tasked with building a carrier for a standard cooler that could follow the person using it. The teams combined students with mechanical and electrical engineering backgrounds to create finished designs.

One of the teams took inspiration from the small toy cars that children often ride on, and used one of those motors for their robot, meaning it has the carrying capacity of much more than a cooler.

"If you don't want to carry your kid around, just throw 'em on the cooler!" said team member North Yates, jokingly.

Team member Evan Vander Hoff said that even though a robotic cooler seems frivolous, there are important applications for the technology.

"The military is investigating ways to use systems like this to allow troops to be more mobile without having to carry as much gear, and more domestic applications like a stroller or grocery cart that could follow along with a user," Vander Hoff said.

Approximately 300 students from area schools also took part, looking at the projects and learning about the work that went into making them possible from the teams of Grand Valley students who worked on them.


Page last modified December 6, 2019
Report a problem with this page