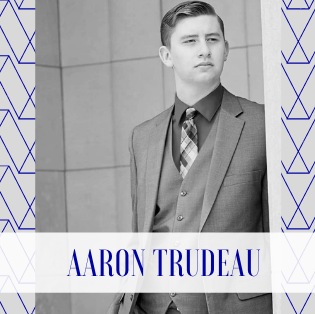 Aaron Trudeau has always had a love for video games and game development. This interest, along with his love for drumming and his older brother being in GVSU’s Marching Band helped him decide to attend Grand Valley State University. He started programming back in high school and knew that he wanted to work in the computing field. During his time here at GVSU, he was part of the Marching Band Drumline, a Computer Science major, and a student in the Frederik Meijer Honors College.

He is a hard worker and thinks of others often, which was highlighted while he was working on his project – Easy Accessibility Package. It’s a program for Unity, a game engine bundled with game development software, that is meant to help video game developers easily make their games accessible to disabled gamers. The main features of his project are remappable control and screen reader support. The remappable controls allow users to change which button performs in-game actions, and the screen reader support has on-screen text or game statues read aloud. Both of these features help make video games more accessible.

This idea struck Aaron during a meeting with his project advisor, Ira Woodring, as Professor Woodring suggested Aaron look into the field of video game accessibility. Aaron stated that, “a couple of weeks later, a thought came into my mind – what if making video games accessible was as easy as downloading a package?” This thought process and his prior experience with Unity made the project come alive. He said that to him, community means “respecting and caring about people, locally and globally, and doing your best to make sure that everyone gets a fair shot in life.” Aaron spoke with Clinton Lexa, a Former Freelance Gaming Accessibility Consultant, as well as Jeff Sykes, the Assistive Technology Coordinator for GVSU’s Disability Support Resources, to learn more about how to make his program package accessible for users, and to hear their suggestions for it.

The Honors College selects award winners for their excellent projects, and Aaron was selected as the Co-Winner of the Outstanding Civic Engagement Project Award. To earn the Outstanding Civic Engagement Project, the student's project must make a contribution to society; either locally, regionally, or globally. The other winner focused on local issues while Aaron’s project focused on a global scale. Professor Woodring said this about Aaron and his project:

“Aaron is a spectacular student and a great researcher, but I was even more impressed by his desire to seek out the voices of people affected by the issues he was trying to solve. At every step in the development of his project he sought input, and he really took the struggles and ideas of the people with whom he spoke to heart.  He has a passion for the field, but more importantly a passion for people.”

Aaron answered a few other questions that speak on his path at GVSU, advice for the next computing and honors college student, and what is next.

I’d say the best way I keep my workload manageable is by making sure to participate in my classes and getting to know my professors, especially by going to their office hours. It’s not a cure-all, but if nothing else, the stress of courses is a lot more manageable if you have good relationships with your professors.
For any incoming students making that decision, my only advice is to give the Honors College a try, even if you’re worried about the workload. Honors courses at GVSU are different from any other courses I’ve taken; they’re totally unique, super interesting, and have consistently helped me improve my communication skills throughout my time here. Give the Honors College a shot if you can!

What is your favorite memory from your time here at GVSU?

My favorite memory is playing in the LMB during halftime at one of the football games in the pouring rain. It was so hilariously freezing that I couldn’t even feel my hands, which made drumming a lot more difficult, but it was one of the most fun shows we played that season, and everyone was really into the music and totally having a blast! It was hands down the most fun show I played in the LMB and the most memorable moment of my college career.

My favorite food is pasta or noodles of pretty much any kind – anything from fettuccine alfredo to pad thai! My favorite place to eat around Grand Valley or Grand Rapids is Aroy Thai in Allendale, but they’re currently changing their location to Standale. Once they open at their new location, I’m getting their pad thai ASAP, and everyone else should too! As for recommendations for things to do in Grand Rapids: it’s a beautiful city with so much to do – just explore the city for a bit and go to some local businesses!

What are your plans after graduation?

After graduation, I’m starting in a web development position at Kyros Digital, a Grand Rapids company where I did my internship. In my free time, I plan to learn more about gaming accessibility by continuing work on my senior project. Eventually, I may try to get a master’s degree, but I’m taking a few years off of school before then.

We wish Aaron the best of luck with his future endeavors! You are a GVSU Computing student for a lifetime!

Read the original article published on the GVSU CIS website.