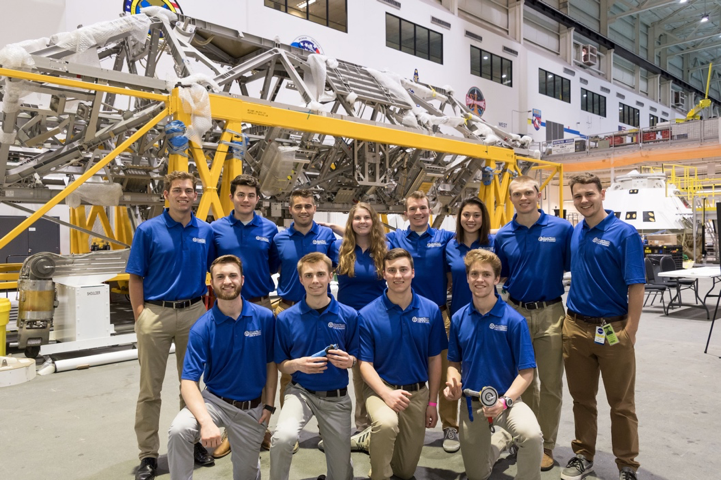 12 undergraduate engineering students were selected to be a part of NASA’s Micro-g NExT experience to test their handcrafted designs that could be used in future space missions.

“The Module Leak Repair System is a wall anchor that seals holes on the exterior of space ship,” said Landan Jacobs, PDM engineering student. “I worked on that device, while our other team engineered an EVA Ziptie Cutter that cuts zip ties on space ships.”

The students used multiple resources at GVSU including their faculty advisor Sanjivan Manoharan for guidance, the Office of Undergraduate Research and Scholarship (OURS) for travel funding, and the Machine Shop for creation and ideation.

“We couldn’t have done any of this without Roy Visser who works at the Machine Shop,” said Jacobs. “We were able to make our designs by hand, while other universities had to send out their designs. We were lucky because we had his assistance for welding and we had the tools necessary to complete the project.”

From May 21-24, the teams tested their designs at the stimulated microgravity environment of the NASA Johnson Space Center Neutral Buoyancy Laboratory (NBL). They communicated with professional NBL divers from a control room where they gave careful instructions on how to use their device. When this was over, both teams had successfully executed their designs.

“Testing our device was an amazing experience,” said Stacy Brennan, PDM engineering student. “Seeing our device in action, communicating with the divers, and knowing that we have the potential to do big things someday was unique on its own.”

The team leads for the MICRO-g NEXT experience were Nate Kyburz and Kevin Black. Kevin Black and Nate Kyburz are both seniors studying product design and manufacturing engineering. Nate Kyburz mentioned that their team dynamic was all about having fun and being professional.

“Trying to get things done is this group was hard at the beginning because we are all really great friends,” Kyburz said. “But, when we were at NASA we put our jokes aside and became very professional. We’ve been told two years in a row that we are one of the most professional universities that have been participating in this challenge.”

“I feel like we have a leg up on the competition,” said Jackson Brennecke, PDM engineering student. “Our design was competitive with other schools that have bigger programs than us. It’s nice to know what we learn at GVSU is applicable to the real world.”

The 12 students are looking forward to sharing this experience with their future employers, whether they be NASA or other upscale engineering programs for their future job search.

The team fully agreed that GVSU helped prepare them for this experience and gives thanks to the School of Engineering, the OURS, Roy Visser, and their faculty advisor Sanjivan Manoharan.


Page last modified July 3, 2018
Report a problem with this page