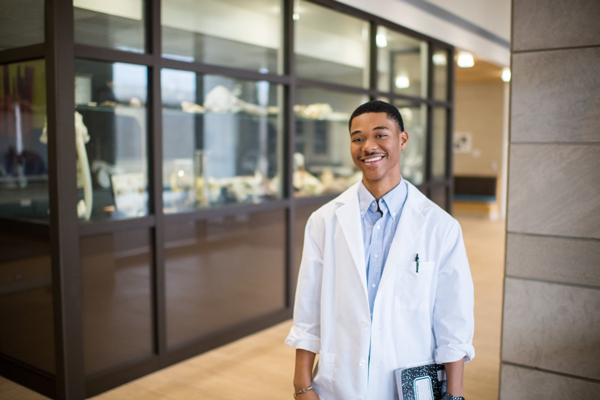 Lavar is a senior studying behavioral neuroscience. He became interested in the brain at a young age, but he never thought about how he could be involved in research until began working for the Office of Undergraduate Research and Scholarship (OURS) his sophomore year.

“I didn’t know anything about research until I started working there,” Lavar said. “I learned more about it, asked Susan Mendoza some questions, and then got into contact with Glenn Valdez… I told him ‘I want to be on your research team.’”

Lavar joined Valdez’s research team his junior year and did extensive research in the Summer of 2018. In his research, Lavar examined the ability of the CRF2 receptor to alleviate depressive-like behaviors following long-term withdrawal from alcohol by investigating the ability of Urocortin 3 (Ucn 3), a neuropeptide that selectively activates CRF2 receptors, to reverse immobility in the forced swim test, an animal model of depression, among rats.

“The decision of making the subjects rats was because they have a similar brain anatomy to humans,” Lavar said. “A lot of their behaviors mimic humans. So, when we had to give them the ethanol solution, the rats would be wobbling and stumbling in the cages just like humans would.”

Lavar and his lab partner both started with around 28 rats. When the research began, Lavar faced a major challenge. “Well, when we started the experiment I was afraid to work with the rats,” Lavar explained. “Coming into it I was kind of nervous on how to handle them...This was my first time doing research, and I have never played with rats before.”

Although he started with fear, Lavar became attached to the rats. He mentioned that some of the rats had a hard recovery from the surgical implantation. It made him upset because some of the rats did not make it through the surgery. Though some rats did not survive, the results of the research showed great significance. “I think we are a step-forward in knowing more about alcoholism, and simply knowing why people experience certain types of emotions or state of mind after alcohol withdrawal,” Lavar said. “We know why people may experience these symptoms or this type of behavior. We also know that the treatment we used was significant in lowering the depression in our rats.”

Currently, Lavar plans to attend grad school after graduation to obtain a PhD in Neuropsychology. The GVSU McNair Scholars Program will continue to support Lavar through GRE preparation, assistance with submitting applications to PhD programs, funds for graduate school visits and presenting at conferences, and many more resources.

For more information, contact the Office of Undergraduate Research and Scholarship at [email protected]

Return to the listing of student spotlights.