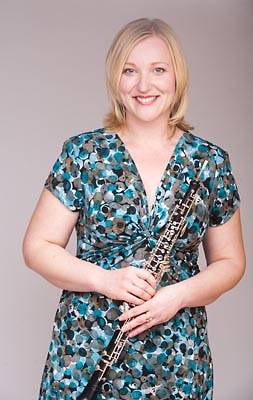 A native of the Czech Republic, Marlen Vavriková graduated from the Janacek Conservatory in Ostrava in 1996, and went on to earn a Master of Music degree in Oboe Performance and Literature from the Eastman School of Music and a Doctor of Musical Arts degree from the University of Illinois at Urbana-Champaign, where she studied with Nancy Ambrose King, Richard Killmer, and Daniel Stolper. Marlen has appeared as a soloist with the University of Illinois New Music Ensemble, the Baroque Artists of Champaign-Urbania, and the Janácek Chamber Orchestra and has performed under such conductors as Robert Shaw, Donald Hunsberger, Samuel Adler, Ian Hobson, Beter Bay, David Effron, and Constantine Orbelian. Her playing has recieved recognition in the United States and Europe. She was selected as a finalist for the Krannert Debut Artist Award at the University of Illinois and has won competitions of conservatories held in Ostrava and Kromeríz.

In 2002 and 2004, she joined the Moscow Chamber Orchestra on its American tour and the Eastman Wind Ensemble on its tour of Japan in 1998. In addition, she has performed at the Sarasota, Hot Springs, Banff, and the Ostrava New Music Days festivals and has taught at the Illinois Summer Youth Music Festival in Urbana-Champaign and AMEROPA Chamber Music Festival in Prague. She has given performances at the International Double Reed Society conferences and appeared as a soloist at the Society of Electro-Acoustic Music conference in San Diego, California. Besides receiving a stipend from the Czech Musical Fund and travel grants from the Ostrava City Council and the Civic Foundation, Marlen won the Presser Musical Award, the Kate Neal Kinley Musical Fellowship, and the Fellowship for the Creative and Performing Arts at the University of Illinois. Her scholarly work is represented by an interview with Miroslav Hosek (International Double Reed Society Journal, Fall 2003) and an annotated survey of contemporary Moravian oboe works written since 1969. Currently, Marlen teaches oboe at Grand Valley State University in Allendale, Michigan, where she has appeared as a soloist with the GVSU Chamber Orchestra and the Symphonic Wind Ensemble.


Page last modified April 14, 2021
Report a problem with this page