Do you have questions about Kent-Ottawa-Muskegon Foreign-Trade Zone? We've got answers!

DUTY AND EXCISE TAX DEFERRAL
Companies can defer payment of duty and federal excise taxes on shipments stored in a zone. This applies to wholesale and retail businesses and any company that utilizes imported goods or materials.

Duty-Free Manipulation of Imported Goods
With proper board approval, merchandise imported into the zone may be tested, inspected, re-packaged, re-labeled, aged, cured and exhibited all before payment of duty. Again, duty and federal excise taxes are paid only when the goods are withdrawn from the zone, and only on the quantities withdrawn. 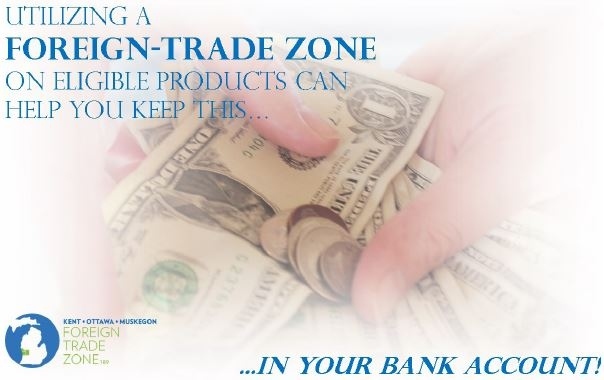 Inverted Tariffs/Duty Reduction
Businesses may also achieve lower Customs duties operating in an FTZ by combining several components (either foreign or domestic) into a finished product with a lower duty rate. The lower rate is paid only on the percentage of the final value the imported goods represent. This is the so-called "inverted tariff" benefit.

Quota Timing
Goods in excess of any U.S. imposed quota may be held in the zone until the next quota period opens again. With proper approval goods subject to quota may be manufactured into a product not subject to a quota for importation.

DUTY AND EXCISE TAX AVOIDANCE
Companies importing components to be used in products for re-export can avoid the payment of duty and federal excise taxes altogether by conducting their operations within an FTZ and re-exporting from the zone. This activity may add or maintain jobs where the zone is located.

Re-Exports
Merchandise that is imported into a Foreign-Trade Zone and later exported from the Zone has never assessed Customs duties.

Zone-To-Zone Transfers
Imported merchandise, which is admitted into a Zone and shipped to another U.S. Foreign-Trade Zone, can be shipped duty-free to the receiving Zone. As duty-free transfers, Zone-to-Zone shipments allow both the shipping Zone and the receiving Zone to reduce their duty exposure. Duties are eliminated completely on imported components that are exported from a zone or the duty can be delayed until it departs the last zone for entry to the US market.

Reject, Scrap, and "Consumed" Merchandise
Imported merchandise admitted into a Zone then rejected, scrapped, or consumed in the Zone is not assessed Customs duties. Duties are reduced significantly for all merchandise that is scrapped through a manufacturing operation in a Foreign-Trade Zone and sold from the Zone as commercial scrap.

Merchandise Processing Fee Reduction
Customs assesses a "Merchandise Processing Fee" (MPF) for each Customs entry and is calculated as 0.3464% of the full declared value of the merchandise, up to a maximum of $485 USD per entry. Foreign-Trade Zone users are able to reduce numerous Customs entries to as few as one entry per week for all products leaving the Zone, thus ensuring only the maximum MPF of $485 is paid each week, reducing MPF costs to importers who currently file multiple entries each week.

Could your company benefit from using a Foreign Trade Zone? Contact us to find out.


Page last modified March 25, 2019
Report a problem with this page