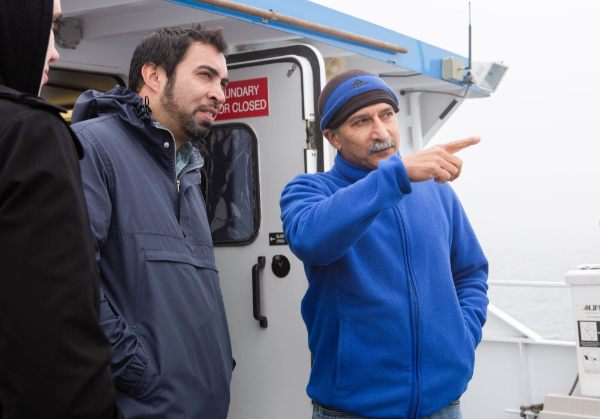 Bopi Biddanda, right, professor of water resources, is part of an international collaboration trying to determine how the Earth was oxygenated billions of years ago, setting the foundation for life today.
Image Credit: Rachael Mooney

A Grand Valley researcher is part of an international collaboration looking for the answer to a billion-year-old question — how did the Earth develop enough oxygen to support life?

Their findings published online Aug. 2 at Nature Geoscience, nature.com/ngeo, link the Earth’s gradual rotational deceleration because of the moon and the planet’s oxygenation that set the foundation for life today.

Bopi Biddanda, professor of water resources at the Annis Water Resources Institute, co-authored the paper with researchers at the University of Michigan and the Max Planck Institute.

The team’s findings show how the microbial mats respond to an increase in daylight by increasing its production of oxygen and may be connected to how the planet’s oxygen levels rose.

“Everything depended on this thin film of life that eventually made oxygen over time,” said Biddanda. 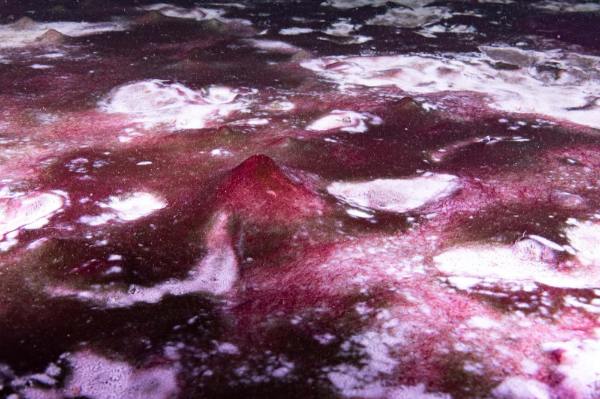 Microbial mats like this one in Lake Huron prevailed in the Earth’s oceans billions of years ago. Research links the Earth’s slowing rotation to an increase in daylight and thus an increase in oxygen production by the mats.
Image Credit: Phil Hartmeyer, NOAA/Thunder Bay National Marine Sanctuary

Four and a half billion years ago, the moon was newly formed and much closer to the earth than its current position — about 16 times closer. With the moon only 15,000 miles away, it greatly affected the globe’s young oceans.

As the moon’s gravitational effect influenced the tides, the tidal movement slowed the Earth’s rotation. Eventually over billions of years, a day on the primitive earth lengthened from about six hours to 24.

Meanwhile, along the coastlines of the planet’s continents, microbial mats — similar to the ones in Lake Huron — were surviving on the hydrogen sulfide in the water, and through photosynthesis, were outputting tiny amounts of oxygen.

“(The mats) look like a rug or carpet, they would grow where there was still sunlight,” said Biddanda.

With only three hours of daylight, the microbes had a short window to produce oxygen through photosynthesis. As the days lengthened over hundreds of millions of years, the microbial mats received more daylight and time to make surplus oxygen.

Around 500 million years ago, there was a huge oxygenation event. Over the span of tens of millions of years, oxygen levels rose from less than one percent to its current 21 percent.

The event also coincides with the Cambrian explosion — an enormous expansion of aquatic life in abundance and diversification — and laid the foundation for evolution of the modern-day biosphere.

“This work is a great example of how a careful study of a small piece of our natural world can reveal so much about the workings of the entire natural world,” said Biddanda.

Thanks to an NSF-funded project, Biddanda is continuing his research on the Lake Huron microbial mats with assistant professor of biology Sarah Hamsher, research technician Ian Stone and student Janelle Cook.

“It’s a great reminder of how a series of very fortunate cosmic events occurring over time, such as the formation of the moon, and the ensuing Earth-moon dance, have come together to result in the delicately balanced biosphere we have now,” said Biddanda.

“All the more reason to cherish it.”