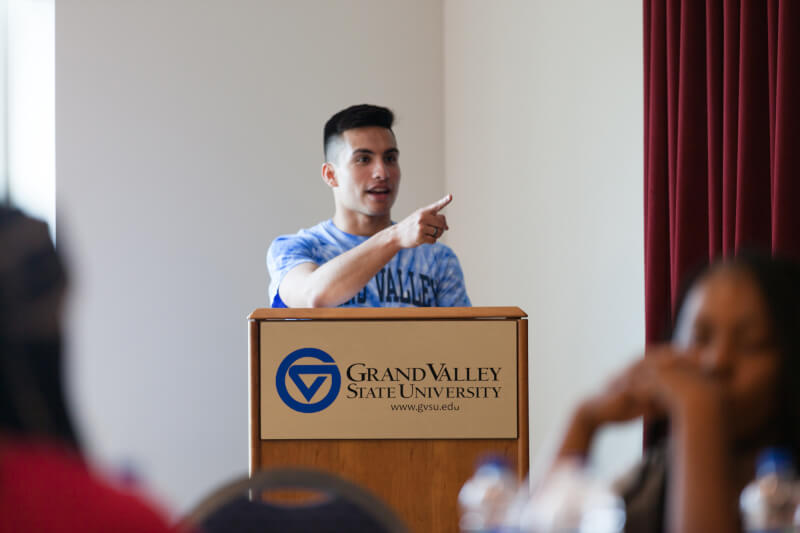 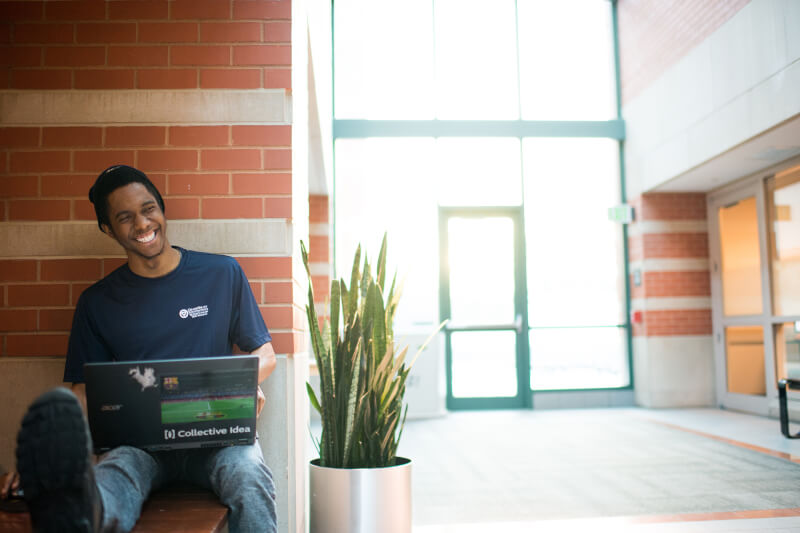 Juan Mascorro-Guerrero and Gloire Rubambiza found their way to Grand Valley from Mexico and Uganda, respectively.

They were both immigrants, arriving in Michigan with their families, learning to adjust to school then thriving with excellent grades at their high schools. Both Mascorro-Guerrero and Rubambiza will begin graduate degree programs in the fall, and both earned graduate assistantships to pay for their tuition and living expenses.

While at Grand Valley, they joined mentoring programs through Laker Connections and credit their academic success, in part, to their participation in those programs.

Mascorro-Guerrero graduated from Thornapple Kellogg High School and then enrolled at Grand Rapids Community College, under the Deferred Action for Childhood Arrivals (DACA) program. At one point, he was working three jobs to pay off his college debt.

He transferred to Grand Valley in 2016 and was introduced to campus life through Laker Familia Orientation. The program began in 2014 as a three-day orientation for students who identify as Latino or Hispanic and has since expanded into year-round programming.

"It was like being with my own little family," Mascorro-Guerrero said. "There was this network of people who looked and identified like I did. It was a three-day long orientation, and I'm still friends with people who I met there."

He was matched with mentors on campus, attended workshops and conferences, and found employment at the Office of Multicultural Affairs. "Because of Laker Familia, I found employment on campus and scholarship opportunities and was able to graduate debt-free," Mascorro-Guerrero said.

In August, he will move to East Lansing and begin a graduate assistantship, working for Michigan State University's housing department, as assistant community director while earning a master's degree in student affairs administration. He earned a bachelor's degree in criminal justice.

Mascorro-Guerrero said earning a job in housing was ironic, considering he has never lived on campus. Yet because of his involvement with Laker Familia he has no doubts he will be successful and can help undergraduate students succeed.

"It's really changed my life, the mentors I have had, my job. I had support and now I'm able to go to graduate school," he said. "I want to make sure underrepresented students are making it to college and graduating."

Rubambiza first came to Grand Valley's campus as a high school student to participate in a National History Day competition. His research project was about his native country, the Democratic Republic of Congo, and its corrupt government.

"I enjoyed driving the topic, it was the first time I thought that maybe research was in my future," he said.

Rubambiza was 14 when his family left the Congo for Uganda and 17 when they moved to Comstock Park. To catch up academically with his American peers, Rubambiza recalled riding his bicycle six miles daily for summer school. It took one summer session and by the end of high school, Rubambiza was taking computer programming classes at the Kent Career Tech Center.

He enrolled at Grand Valley and among the first university emails he received was an invitation to join the Black Male Scholars program, a campus network to support students with mentors, academic and leadership programming.

"I wanted to do it because I thought it would feel like home," he said. "It's not only professional development, it provided time to pause, think and discuss everything that is happening in today's world. It was comforting to be with people who look like me."

Rubambiza, who earned U.S. citizenship, was also a McNair Scholar and worked with faculty mentor Jerry Scripps on a research project to improve internet connectivity in Africa. He spent last summer at the University of Colorado Boulder as a research intern, focused on learning to improve technology access in developing or rural areas.

He earned a bachelor's degree in computer science in April. In June, Rubambiza left for Cornell University to begin a doctoral program in computer science. He chose Cornell largely based on a mentor, and while there will work closely with Hakim Weatherspoon, associate professor of computer science who is noted for research on web-scale distributed systems and for promoting diversity within computing.

"I was very interested in who would be my mentor, it's kind of like a marriage and you want it to work out well," Rubambiza said.

Learn more about Rubambiza in this Laker Effect video, and more about Laker Connections.