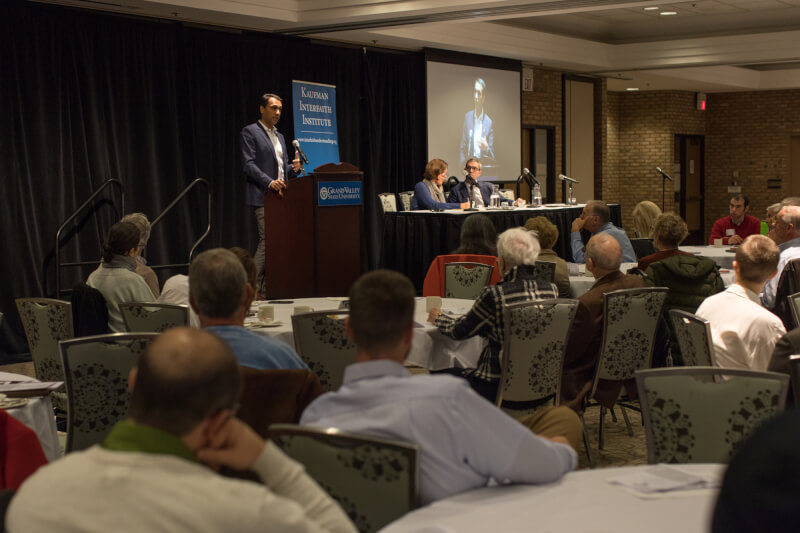 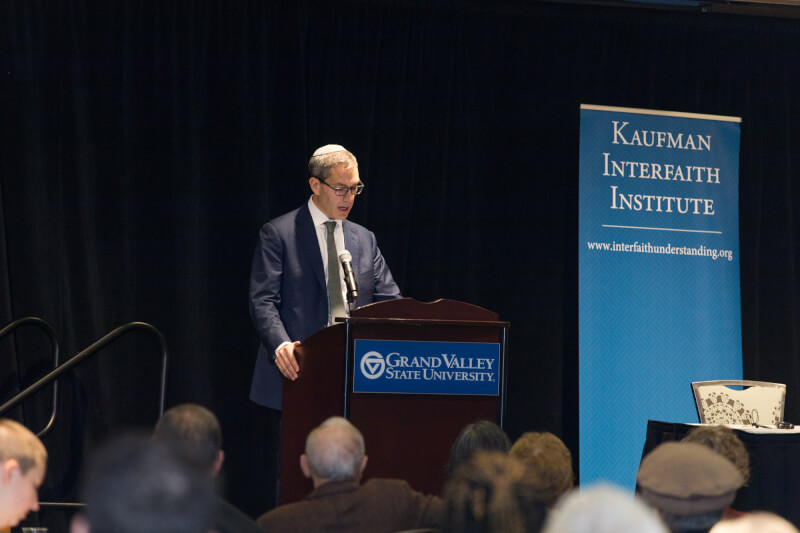 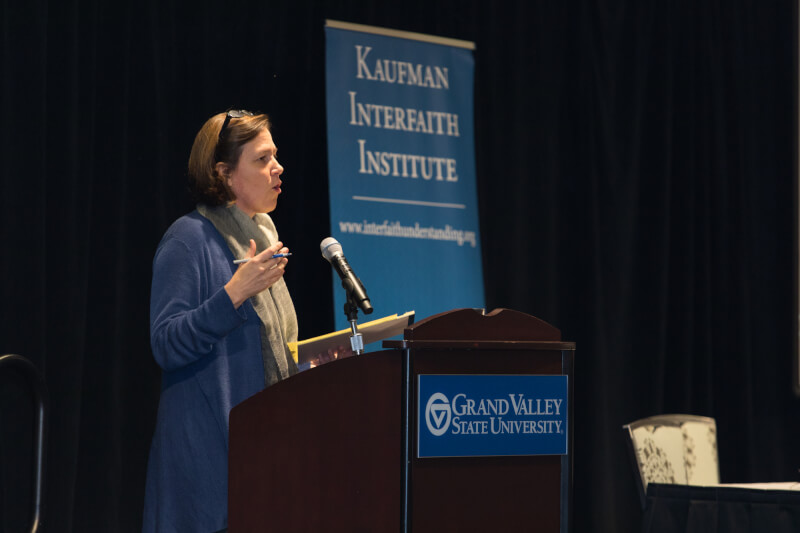 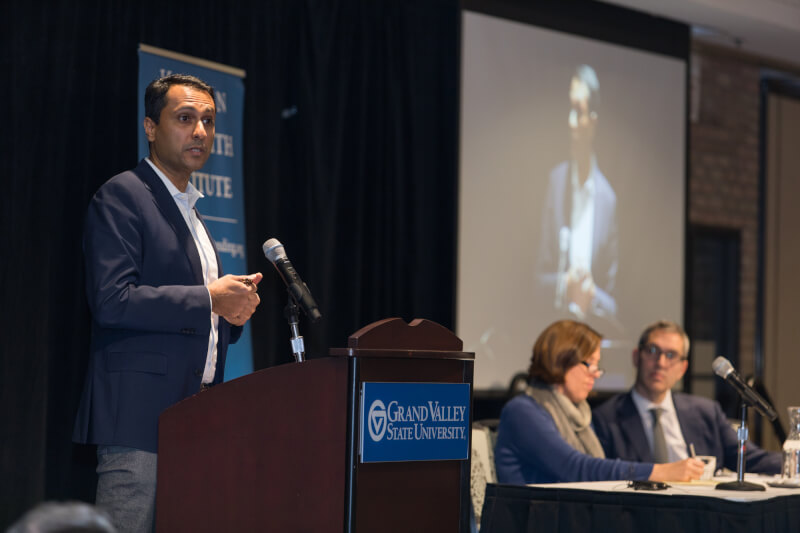 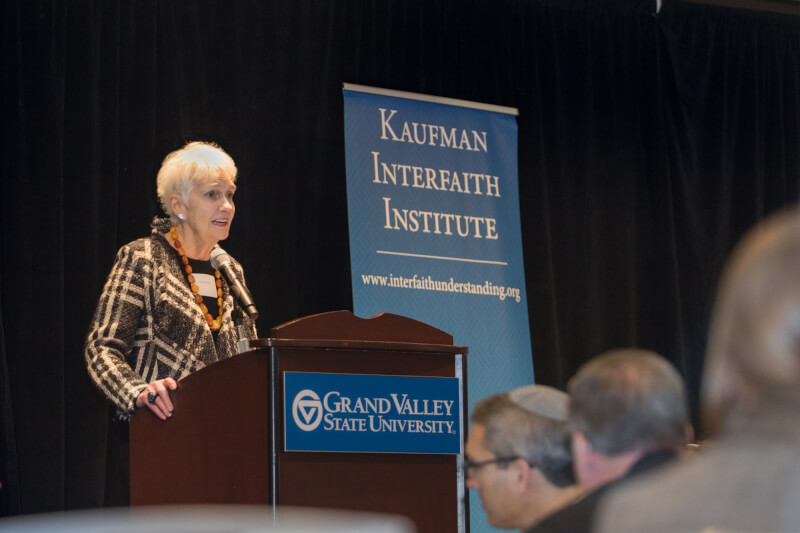 The role of religious communities to both cause and rectify social division and tribalism was the topic of discussion during the Jewish/Christian/Muslim Triennial Interfaith Dialogue Conference at Grand Valley.

The event, hosted by the Sylvia and Richard Kaufman Interfaith Institute, took place November 14-15 in the Eberhard Center on the Pew Grand Rapids Campus. The Jewish/Christian/Muslim Triennial Interfaith Dialogue Conference takes place every three years, bringing together representatives from Christian, Jewish and Muslim faiths to engage in dialogue.

The speakers discussed how or if religion contributes to increased polarization or increased understanding through the lens of this year’s theme, “Religious Identity: Dividing or Uniting?”

During his presentation, Patel, the event’s Muslim representative, discussed how embracing differences while maintaining a “common life” is a primary challenge of diverse societies.

“There are a lot of societies that are diverse that don’t have a common life, and diversity doesn’t always turn out well,” said Patel. “Diversity can just as easily be a civil war as it can be inspiring cooperation.”

Cosgrove, the event’s Jewish representative, reflected on the challenges of living the “hyphenated life” of a Jewish-American, as well as in other faiths.

“Everyone wrestles with hyphenated identities and all of us on some level contend with the degree to which the complexities of our identities prompt us to find common cause with our brothers and sisters who themselves are negotiating the hyphenated aspects of their own existence,” said Cosgrove. “My hope is that by the way of the lens of the Jewish experience that we’ll emerge with a language relevant to all the hyphenated identities of the American religious experience and hopefully build bridges between the two.”

“The common good reflects a vision of a nation where we are welcome and invited to bring the best of our abilities, resources and traditions to the common task of creating a healthy civic life,” said Howe Peace. “If we flip this on its head, unity sometimes comes at the cost of ignoring issues of equity, sweeping questions of power under the rug, and sometimes the common good can be a thin cover for what serves the status quo.”

The conference began on November 15 with opening remarks by President Thomas J. Haas as well as Sylvia Kaufman, ’83. Sylvia and her husband, Richard, provided the initial funding to create the Kaufman Interfaith Institute in 2007.

“I am deeply grateful to Sylvia and Dick Kaufman for their generous support of the work we are doing to bring people together at this time in our history,” said Kindschi. “In our nation and in the international community, understanding and acceptance of all religious perspectives is vital to the cause of peace. Their passion and support inspire our efforts.”

The Kaufmans praised Kindschi for leading the institute with skill and imagination over the years.

“We are delighted to honor Doug and ensure the future leadership of the institute long into the future,” said Sylvia. “We appreciate all that President Tom Haas has done to commit to our collective vision and support it both personally and within the university.”

Sylvia and Richard are lifetime philanthropists. The Kaufman Foundation gives to museums, education, the arts, Jewish agencies and interfaith organizations around the world.

“Sylvia and Dick have dedicated their lives to serving others and their community,” said Haas. “Grand Valley is fortunate to be the recipient of both their vision for interfaith understanding and their financial support. The university is committed to being a good steward of both.”

For more information about the conference, visit gvsu.edu/interfaith.