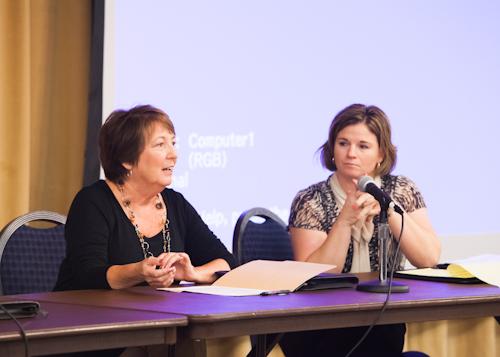 Students in the audience October 24 in the Kirkhof Center first watched a film, “Title IX: License to Thrive,” that focused on the academic and athletic changes over the last 40 years.

Keri Becker, associate athletic director, said Title IX was not about taking away opportunities, but rather advancing opportunities for men and women.

“It’s most important to remember that Title IX is about your ability to be here on campus together as men and women,” she said.

Patti Rowe, professor of movement science, graduated from high school and college before 1972. She told the audience what it was like for her to take college classes with only women, and how, as a high school student, she was excluded from the chemistry and architectural drafting classes she wanted to take.

“We used to play six-girl basketball and we weren’t allowed to use the length of the court because they thought it would be too taxing on girls,” Rowe said.

Grand Valley will celebrate the 40th anniversary of Title IX in February with a reception that honors varsity athletes, club sport athletes and students who majored in movement science. Visit www.gvsu.edu/womeninsportsfor more details.

Grand Valley to honor 'I Have a Dream' 50th anniversary

Inclusion Implementation Plan will fold into next strategic plan