It’s not uncommon for Megan Galvin to smile and wave when she sees her next-door neighbor Marta, a longtime resident of Grand Rapids’ West Side, an area west of the Grand River and south of Three Mile Road.

“Marta and I met over the fence in our backyard. She speaks some English and I speak some Spanish, so we shared a few conversations and quickly became friends,” said Galvin, a senior majoring in art with an emphasis in visual studies.

Friendship, pride and community are common characteristics of the more than 28,000 people who live on the West Side, and those traits are what Galvin said make the area so special.

Galvin’s experience in an art class on the West Side influenced her decision to move there. In the course — called Civic Studio — she and her classmates explored the question “Who thrives on the West Side?”

They presented a set of scenarios about economic and social dynamics to the community, which looked at changes, challenges and growth the area is facing, such as economic development, gentrification and monetization.

“I poured so much of my heart into the West Side, learning about the disparities and getting to know the residents that I decided this is where I needed to be,” she said.

Galvin, from Rockford, is just one of the estimated hundreds of students who live on the West Side, home to Grand Valley’s Pew Grand Rapids Campus, where university collaborations with residents, organizations and schools are common. 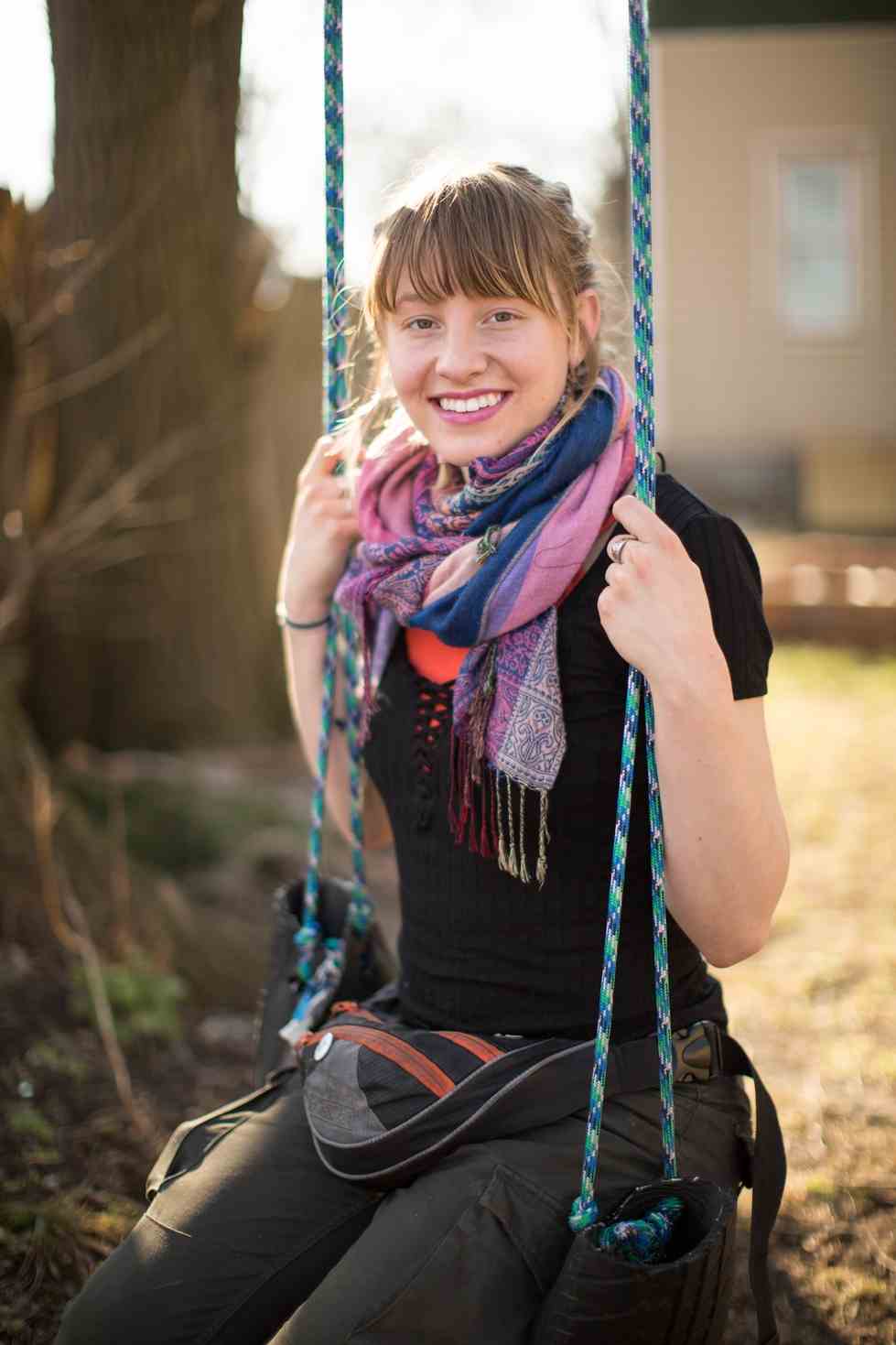 Megan Galvin, a senior majoring in art with an emphasis in visual studies, calls the West Side home.

The university joined the West Side in 1986, when state legislators approved Grand Valley’s downtown Grand Rapids campus. It was a time of growth and rejuvenation for the city. In May 1988, the Eberhard Center opened.

“The building seemed a bit removed from West Side neighborhoods because it was on the east side of the U.S.-131 expressway, so people did not feel they were being infringed upon,” said Pat Waring, director of community relations for Grand Valley. “As the university grew in this area, however, residents began to express concern.”

Since Waring joined the university in 2000, she has been tasked with listening to and working with residents who live near the Pew Campus. She has been a board member of the John Ball Area Neighbors (JBAN) for 16 years and served on the West Grand Neighborhood Organization board. She meets monthly with a group of faculty and staff members to discuss the West Side, and said that has been helpful to identify potential issues and opportunities to work with the community.

“When I joined JBAN, residents wanted zero change in their neighborhood; they thought Grand Valley’s proximity was enough,” she said.

The campus has steadily grown over the years: DeVos Center and Keller Engineering Labs were constructed in 2000, the Kennedy Hall of Engineering in 2007, and, most recently, the L. William Seidman Center in 2013. New buildings, Waring said, brings more people, cars and activity.

“A large presence like Grand Valley in an urban neighborhood is impactful. It affects neighborhoods and the culture of the community in many ways, including economically and residentially,” she said.

Through outreach initiatives to West Side neighborhoods, residents’ outlooks began to change.

“The voices I hear are more accepting and residents now see the university as a stabilizing force in the neighborhood. They see us as the community’s university,” said Waring.

“I poured so much of my heart into the West Side, learning about the disparities and getting to know the residents that I decided this is where I needed to be.” Megan Galvin

Sergio Cira-Reyes, former project director for the WestSide Collaborative, agreed. The collaborative, located at Steepletown Neighborhood Services, is a group of nonprofit organizations that supports residents and causes of the community. Grand Valley is a member.

Cira-Reyes said the West Side embraces students as residents and wants to better integrate them into the community. “We want longtime residents and students to talk and listen to each other,” he said.

The collaborative focuses on community building and he said people from Grand Valley play a role in that.

“All residents have gifts and talents to contribute to their community; they have the necessary ingredients to build a thriving neighborhood,” Cira-Reyes said. “Someone coming into a neighborhood with a big vision is a key ingredient for gentrification, which is why residents must be empowered to dream up their community, and Grand Valley students, faculty and staff who live on the West Side are part of that.”

A story of collaboration and connection

Paul Wittenbraker’s Civic Studio is just one example of many collaborations taking place between Grand Valley and the West Side.

Since 1999, Civic Studio at Grand Valley has engaged students in civic learning by presenting art in a public context. Twelve projects have taken place in different spaces throughout Grand Rapids. Since 2008, the projects have focused on the West Side.

“The studio was created out of Grand Valley’s interest in civic learning and educating students about social practices,” said Wittenbraker, professor of art and design. “Our projects that have explored what is happening on the West Side are helping students and residents understand its past and future.”

In 2013, Grand Valley partnered with the Grand Rapids Community Foundation’s Challenge Scholars program to create a scholarship for Grand Rapid Public Schools students, offering them the opportunity to attend and succeed in college.

The program begins with sixth-grade students at Harrison Park School and Westwood Middle School, both on the West Side. Students who complete program requirements and graduate from Union High School receive a Last Dollars scholarship from GRCF. The value of the scholarship depends on family income and which college the student chooses to attend.

Faculty members and students from the Kirkhof College of Nursing frequently volunteer at Other Way Ministries, an organization that supports urban families and focuses on community building. Assistant professor Susan Harrington’s classes have partnered with the organization to represent the face of health care for residents. These experiences provide opportunities for students to learn about community nursing. 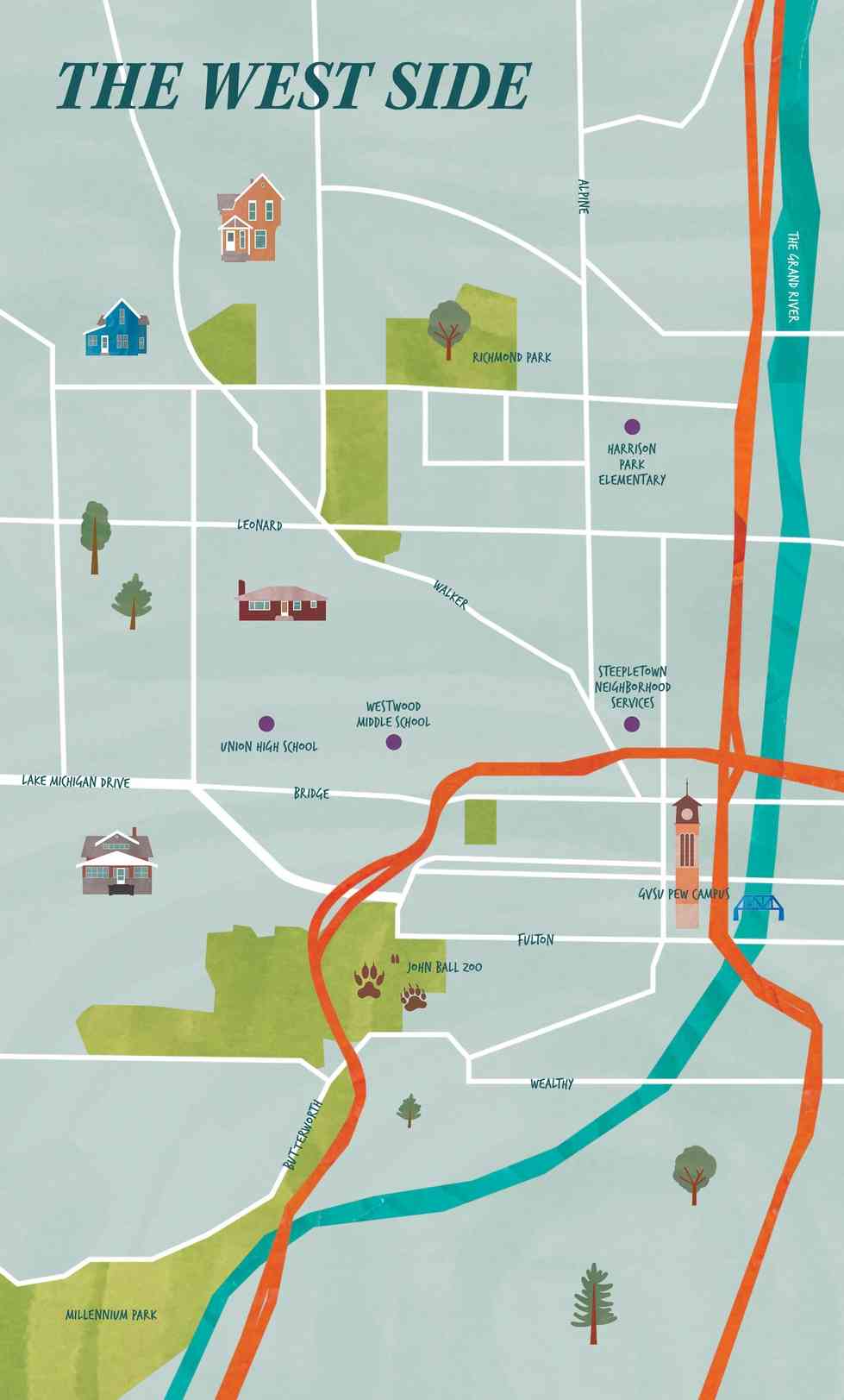 It’s important for students to understand the area’s history, character and how to be a good neighbor, said Melissa Baker- Boosamra, associate director for Student Life and organizer of the event.

“The neighborhoods that surround campus have been here for a very long time. While students living off-campus in rental houses are often temporary residents, the neighborhood around them is impacted by Grand Valley,” she said.

During the event, Galvin and a West Side resident provided tips on how to be a good neighbor. The pair suggested students know their neighbors’ lifestyles, practice good parking etiquette, alert neighbors of gatherings and be considerate.

“It can be as simple as learning their names,” said Galvin. 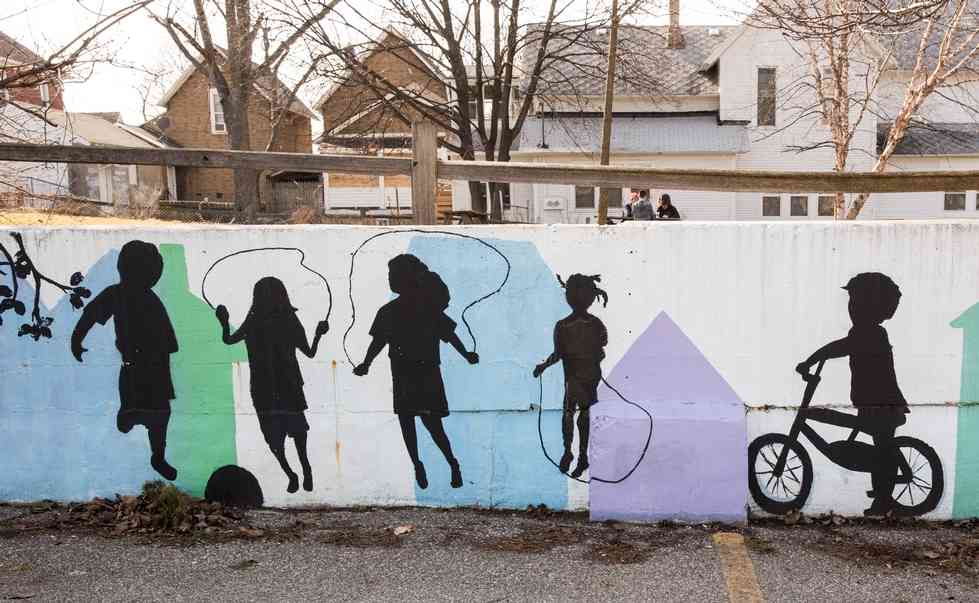 The partnerships and collaborations that have developed organically over the years have set the framework for a more intentional and organized effort.

She said the West Side is the pilot neighborhood for shaping what it means to have a place-based commitment as an anchor institution, which is an organization that has an impact on the local economy and does not move once established.

“As an anchor institution, the most important thing we can do is convene people and bring the power of position,” Stegeman said. “Grand Valley has a lot invested in this community and we have a huge economic impact. Now we must ask ourselves, ‘How are we going to take that power and capability and positively impact it both intentionally and consciously?’ This plan seeks to answer that question.”

Cira-Reyes, who helped develop the plan, said Grand Valley’s engagement with the West Side is on the right track.

“It’s a move in the right direction because there’s an intentional attempt to organize and ensure the impact is going in a good direction, and there’s room for feedback from residents,” he said. “I see this being used as a model for other institutions to engage their communities.”


Page last modified May 25, 2017
Report a problem with this page