Research may influence regulations of yellow perch in Michigan waters

Researchers at Grand Valley’s Annis Water Resources Institute in Muskegon are conducting research that may have implications on the management of yellow perch in Michigan waters.

Yellow perch is one of the most popular fish that anglers seek when fishing in Michigan. With a year-round season and a reputation as good to eat, combined with natural schooling behavior that lets skilled anglers catch them seemingly at will, sustainable management of the fishery’s stocks is important to maintain healthy population levels.

Anglers can take up to 50 yellow perch a day, but the catch limit decreases to 35 in Lake Michigan waters south of the 45th parallel, which crosses north of Traverse City. Carl Ruetz, professor of water resources, said the population in the southern half of Lake Michigan has declined dramatically compared to historic levels.

“What we’re looking at is the spawning population of yellow perch,” Ruetz said. “We’re specifically interested in finding out how different the spawning stocks of fish are from Lake Michigan compared with drowned river mouth lakes.” A drowned river mouth lake is a protected habitat that connects a river to a large lake; in West Michigan these include Muskegon Lake, White Lake and Lake Macatawa.

Ruetz’s research will examine if yellow perch migrate between Lake Michigan and drowned river mouth lakes to better understand the natural history of the fish, which might impact management of the yellow perch by state agencies, like the Michigan Department of Natural Resources. 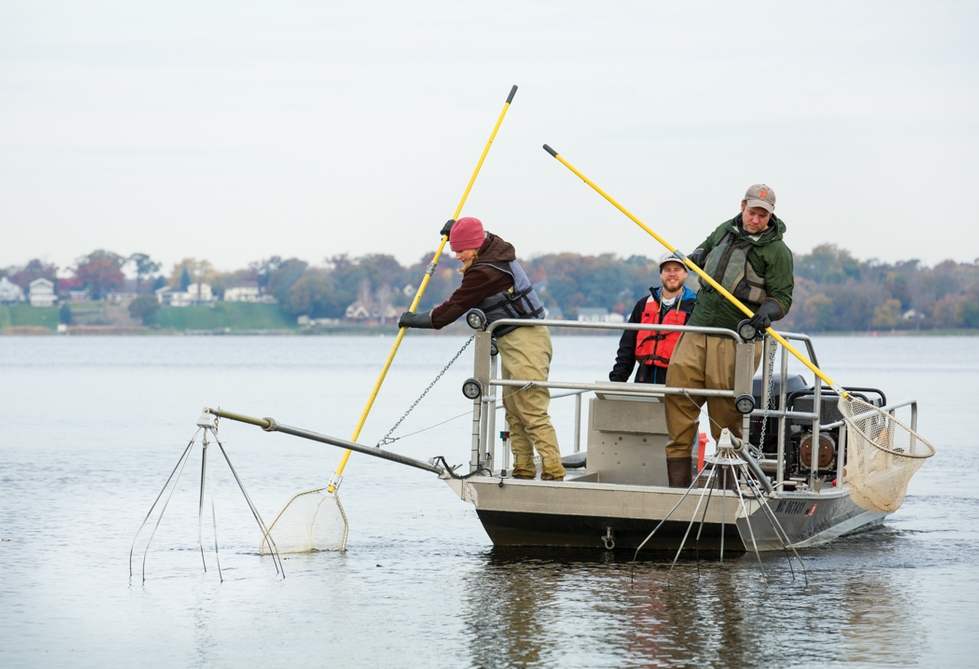 Ruetz and graduate student Greg Chorak, who will base his thesis on the research, are taking samples of the fish at three different times of the year to do genetic testing to see if there are different spawning groups in Lake Michigan than there are in the drowned river mouth lakes. The researchers hope to determine if yellow perch populations differ genetically across sampling sites that include four locations in Lake Michigan and nine adjacent drowned river mouth lakes, as well as if yellow perch migrate between the bodies of water.

“It will tell us where the spawning populations are,” Ruetz said. “If you’re trying to manage yellow perch and you know Lake Michigan fish are also spawning with drowned river mouth lake perch, there are implications for management. It’s important to understand the stock structure and knowing where the fish are coming from.” 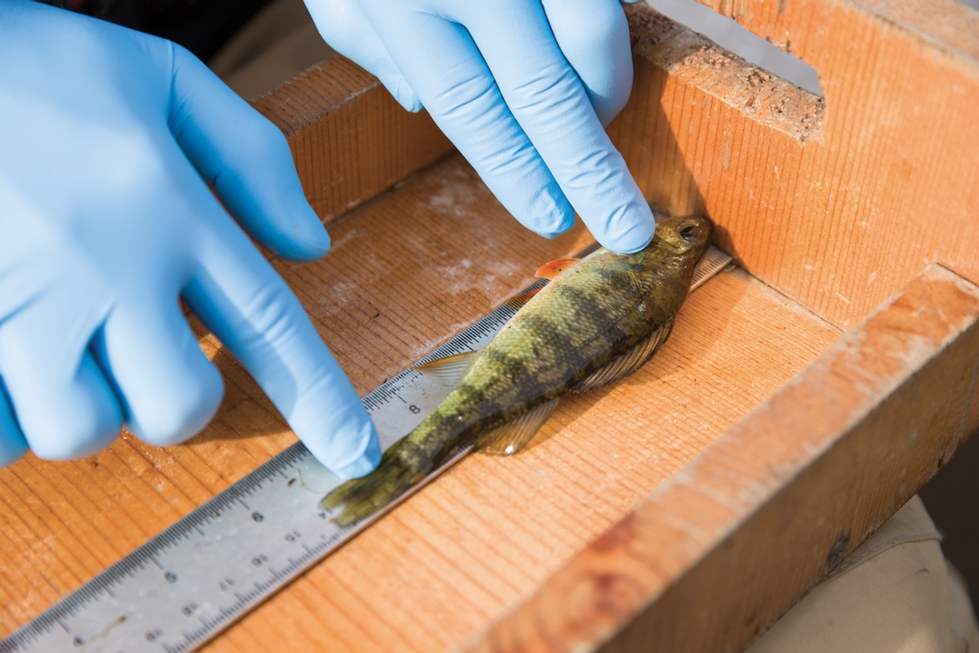 A yellow perch is measured before a sample is taken and the fish is returned to the lake.

If fish differ genetically between locations, researchers will know that yellow perch are more likely to spawn with nearby fish than those from other places. This data will also be used to estimate the frequency of movement between Lake Michigan and drowned river mouth lakes by taking advantage of seasonal sampling and knowledge that yellow perch only spawn in the spring.

If the research team finds that fish are moving back and forth more often than previously thought, state regulators may want to consider changing harvest limits in inland waters, specifically drowned river mouth lakes, to be more consistent with the lower catch limits in Lake Michigan.

The research is currently ongoing, and is expected to be completed by summer of 2017. The project involves researchers from Grand Valley along with help from researchers at Indiana University Pennsylvania, Montana State University, Purdue University, and the Michigan DNR. The project is funded by a grant from the Great Lakes Fishery Trust.

“The overall scientific goal is to better understand the natural history of yellow perch,” Ruetz said. “Such an important fish to the recreational fishery here in Michigan has to be carefully studied to be appropriately and sustainably managed.”


Page last modified February 29, 2016
Report a problem with this page