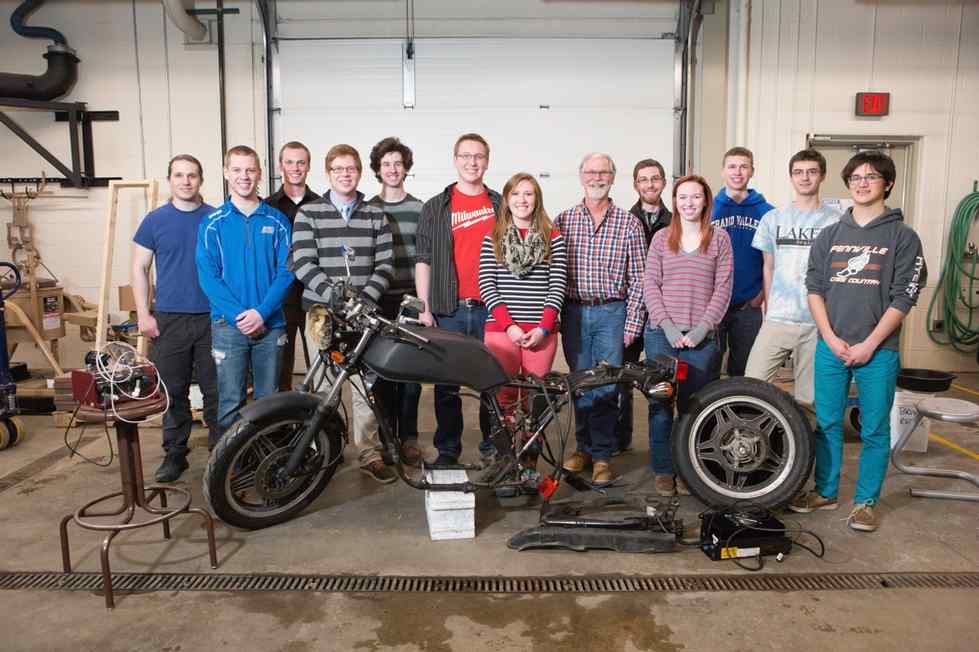 Alternative Energy Club members meet on Thursday nights to work on their newest project, converting a 32-year-old motorcycle into one that operates on a battery.

After successfully converting a standard-combustion 1999 Subaru Outback into a battery-powered vehicle last year, students in the Alternative Energy Club are turning their attention to another form of transportation.

“After we finished working on the Subaru, we thought it would be fun to apply what we learned on the car to a new project,” said Dugan Karnazes, a third-year electrical engineering student from Grand Rapids. In the fall of 2013, they decided it would be a motorcycle. “With a car, you have a lot of space to work with, but with a motorcycle, you have less space to work with and all the plans must be defined, so it’s a good challenge,” he said.

Caitlyn Hurley, president of the Alternative Energy Club, said everything needed to be mapped out before the motorcycle was purchased. “We had to determine where to place the motor controller, the battery, and other parts and pieces,” she said.

Included in the design plan is the ability for the motorcycle battery to be charged from a standard wall outlet. Karnazes said the bike will be highway legal, so it will go at least 55 mph and a predicted upward speed of 80 mph.

Near the end of the fall semester, the group completed a three-dimensional model. They purchased a 1982 Honda CB 750 from Craigslist with financial assistance from the School of Engineering and a grant from the Grand Valley Sustainability Reinvestment Fund.

Group members removed the engine and other parts, so all that was left was a frame. “We had to perform a stress analysis to make sure the frame could handle all forces that will be exerted,” said Hurley, from Clinton Township.

Karnazes said these types of projects give students the opportunity to apply what they have learned in the classroom to a real-life project. “These projects also give entry-level engineering students access to experiences they wouldn’t normally see until they take the higher-level courses,” he said.

The group plans to make the instructions available to the public when the motorcycle transformation is complete. “The whole idea is that this is a community project,” Karnazes said. “The model we have is extremely popular, so if other people out there want to build their own, they can follow our guidelines.”

Hurley and Karnazes said the main focus of the Alternative Energy Club is to get students exposed to things they might not experience otherwise. “We do a lot of fabricating in the machine shop and it’s only available to upper-level mechanical engineering students, but through this club, they can learn how to use new tools and concepts,” he said.

The group spends about two hours each week building the motorcycle in the Keller Engineering Labs building. In addition to the Subaru, the group has also designed and built a bicycle that can run on a battery.

Karnazes said when the group finishes existing plans for the motorcycle, it will serve as a platform for continuous improvement. “There are a lot of electric motorcycle races and competitions, so we’d also like to take it down to a track and play with it,” he said.


Page last modified May 19, 2014
Report a problem with this page