The saying, “out with the old, in with the new” rings true with the newly renovated James H. Zumberge Hall.

For nearly 45 years, Zumberge Library served as a study space for thousands of students. Today, the building serves as a workspace for hundreds of staff members in 16 administration offices, including the President’s Office.

The renovation project began in 2013 and was completed in summer of 2014. It was built to LEED (Leadership in Energy and Environmental Design) silver standards, an internationally recognized certification system developed by the U.S. Green Building Council and a baseline in design at Grand Valley. The $22 million project, which includes a 22,664-square-foot addition on the south side of the building, was funded through university-issued bonds and Campus Development Funds.

“We’ve done renovations on other buildings, but nothing to this extent,” said Scott Whisler, project manager for Facilities Planning. “With a renovation you don’t have the freedom to design from scratch, so you have to work with what’s already there.”

Whisler said it was important to use sustainable construction practices during the project. He worked with locally based companies VIA Design (architect) and Wolverine Building Group (builder) to create a design for the 90,391-square-foot building. The goal was for the design to meet LEED standards and preserve the building’s original character. 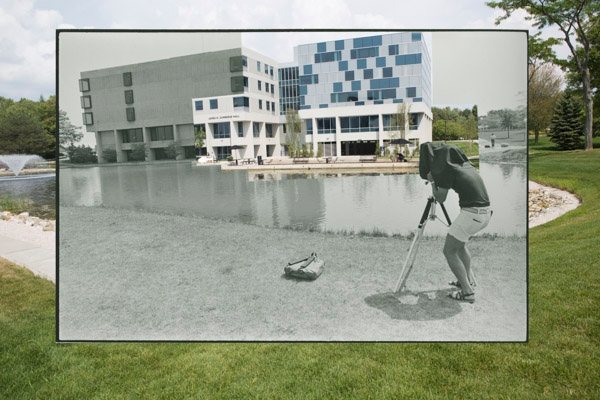 A student (inset) takes a photo of Zumberge Library in the 1970s; the new additions to Zumberge Hall are pictured.

Many materials used for the renovation were purchased from local and regional companies. Whisler said the Facilities Planning team hired as many local contractors and subcontractors as possible. The inside of the building was completely gutted, except the large staircase in the center of the building.

“We did this so people are reminded of the original building each time they visit,” Whisler said. “We tried to mimic the fluted concrete technique used on the exterior of the building, but it was a challenge to meet the quality of the original, which shows how impressive the craftsmanship was back then.”

The renovation was designed for the building to decrease energy use over the baseline of the building’s performance, a LEED standard. Whisler predicts that the building will save 20-26 percent annually.