While the location of the radio station moved from Kirkhof Center to the Commons and then back to Kirkhof, one thing that remained constant was the sticker-covered door, highlighting bands, music festivals and even other radio stations. 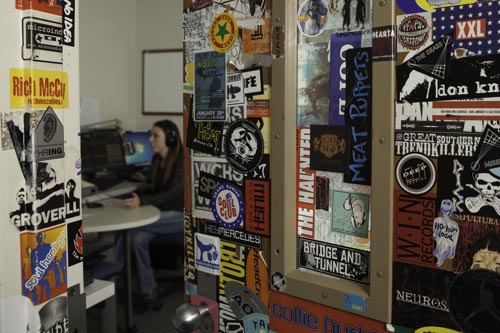 Technical difficulties, a late start and a broken tripod were among the many challenges during the student-run TV stations live broadcast of the first Lakers for a Cure telethon last spring, but GVTV manager Jaime Bartkowicz was proud of how everyone came together in a successful team effort.

For the first time, the team included all three student media organizations. Whale Radio WCKS did a live remote broadcast from Kirkhof Center, GVTV broadcast live from both its studio and Area 51 in Kirkhof Center, and the Lanthorn published several stories. Their efforts helped raise more than $2,400 for Relay for Life in a 24-hour period, to support the American Cancer Society.

Bob Stoll, associate dean for Student Life, said the infusion of experienced advisers and a professional curriculum has strengthened all three media outlets, which receive financial support through the Student Senate funding process for student organizations. "As student media continues to evolve, one thing hasn't changed," said Stoll. "There has always been a goal to balance professional expertise and direction without taking away the independence and ownership as student-run media."

Lawrence Beery, associate professor of journalism in the School of Communications, has served as faculty advisor to the Lanthorn since 1991, sharing his 36 years of experience in advertising and print media. "The Lanthorn would never have been able to evolve without the sustained support from Grand Valley," said Beery.

Len OKelly, who has more than 25 years experience in the broadcasting industry, was named as WCKS and GVTV advisor in 2012, when he took a position as a visiting professor of communications. He stressed that student media is open to all students. "Some people just want to do this as something fun to do," he said. "I tell all my students that even if you don't plan to go into radio or television, working for one of the stations helps you become a better consumer of both. Today, media literacy is very important for everyone." 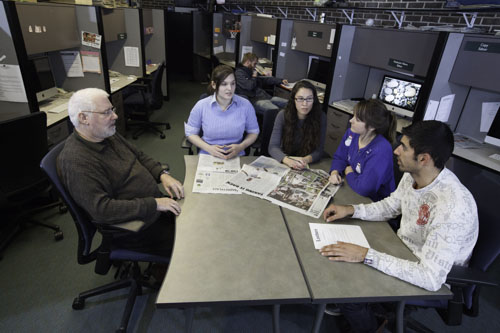 Finding ones niche, and ruling others out, has been one advantage of participating in numerous student media roles.

Dan Spadafora, 13, came to Grand Valley intending to study medical psychology and took OKelly's Introduction to Radio class as an elective. He was so enthralled that he got involved in all student media. Spadafora wrote for the Lanthorn, was station manager at WCKS, and did GVTV play-by-play for Grand Valley Dodgeball, earning an honorable mention student award from the Michigan Association of Broadcasters.

"I owe my start in professional broadcasting to working on the Whale and to Len, who helped me get experience and internships," said Spadafora, who graduated with a double major in broadcasting and journalism. Following graduation, he spent the summer calling baseball play-by-play for the Joliet Slammers, beating out more than 100 other applicants for the unpaid internship. Midway through the season, he was hired as the Illinois teams director of broadcasting.

He also worked for Clear Channel in Grand Rapids on WOOD Radio, and as a studio host for Grand Valley Football on ESPN 96.1, before moving to morning show host and brand manager at 1450 AM-WHTC, in Holland. "If you decide that media is what you want to do, go all in and do everything you can, because you will be rewarded for all the long, hard hours," he said.

Austin Brunner, 12, came to Grand Valley thinking he wanted to be the next big shot reporter, bringing breaking news to viewers. During his senior year, as news director for WCKS, he was the color commentator for the Women's Hockey club team. "Dan Spadafora and I got to travel
with the team and broadcast games over the Internet," he said. "Both of us were, for the first time, trying to do it in a legitimate fashion."

Martin Slagter, 05, believes the variety of experiences and challenges he had during his three years at the Lanthorn helped him become a versatile reporter able to cover a wide range of topics. "That is critical in today's highly competitive job field," he said. "The Lanthorn provided me with the skills necessary to hit the ground running after graduation, just as the industry was going through huge cuts and reorganizations."

Slagter worked as a stringer for the Advance newspapers and did page design at the Grand Haven Tribune before landing at the Pioneer in Big Rapids as an education reporter. When he was promoted to sports editor, he helped another Grand Valley graduate and former Lanthorn editor, Lauren Fitch, '10, take over his education beat. They are now engaged; in November they moved to Indiana to work at the Kokomo Tribune.

Building on the past

Grand Valley's student newspaper is celebrating its 50th anniversary. Now published twice weekly, the newspapers 1995 website addition ( www.lanthorn.com) was at the time the first weekly digital edition for all Michigan collegiate newspapers; iPhone and Android mobile apps were developed in 2012.

Today, as from the start, Lanthorn reporters cover campus news and events, and provide student opinions about the university. "It not only provides learning experiences, but also unique content of interest to students that is not found anywhere else on campus," said Beery. "It has always had an open editorial policy, like any newspaper, and a system of checks and balances."

Beery subscribes to the ethics of the Association of College Media Advisors. "My role as advisor is not to dictate, but offer options for the staff to consider. The students sharing their vision with me is really what makes this fun and rewarding to me," he said.

This academic year brought another General Excellence award from the Michigan Press Association, one of nearly 160 state, regional and national awards the newspapers has received in the past 10 years.

Current editor-in-chief Lizzy Balboa recognizes the challenges of keeping up with a changing newspaper industry. "We're always adapting to technology updates and supplying information through new mediums," she said. "From the Lanthorn website to the iPhone app, we've had to develop new skills and take on new responsibilities to reach out to our readers and meet their demands." 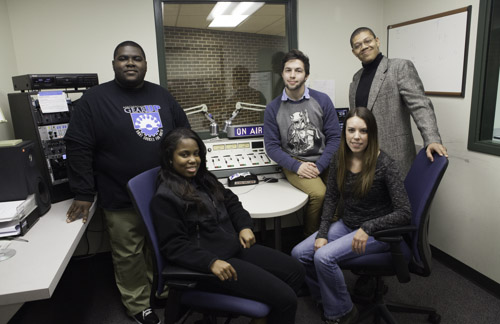 The student radio station has endured several changes to its call letters and studio locations since its 10-watt debut in 1966, but its mission to be student-run and provide creative opportunities has endured.

Today, Whale Radio WCKS is an Internet radio station, found at www.whaleradio.org, streaming live from a studio located in the Kirkhof Center. Audiences can also listen on-the-go, anywhere in the world with the Whale Radio app for tablets or for Android phones an Apple app is in the works. A Whale Radio social media presence is also maintained on Twitter and Facebook.

Station Manager Jamel Watson, a senior broadcasting major from Detroit, has been involved with WCKS since 2009. He said O'Kelly upgraded the quality of the audio board and how music is played. "Before, people were just playing music from their personal devices, from YouTube or CDs and the audio quality wasn't very good," said Watson. "Now the station uses Digital Jukebox, a service that not only provides a music library from a variety of genre but also houses sound effects and promos."

The more professional attitude and operation has improved the stations image and grown student participation to about 60. They not only play their favorite music but host talk shows and provide live news and sports coverage. The stations website was recently updated to include student articles as another opportunity to get involved. 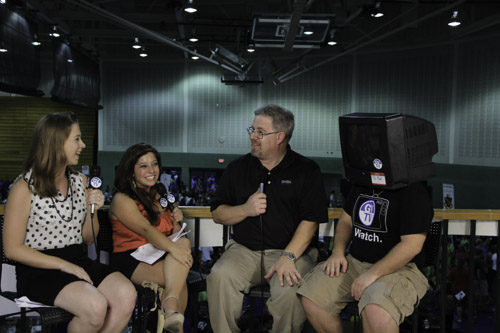 GVTV will celebrate its 10th anniversary this fall. The station airs online episodes in addition to closed-circuit campus access on Charter Channel 10, which is also available at the Traverse City and the Muskegon centers. It began as the Grand Valley Broadcast Network, GVBN-Channel 7, established by Jillian Austin and Cori Fite, the only two women in a film class taught by Kim Roberts, associate professor in the School of Communications.

"Prior to GVBN there wasn't a way that students could work together to learn how to make films or television shows unless they were in a class," Austin said. Both women held key positions at the station during their college years and have remained friends and partners in Murder Mitten Productions.

Among the organization's membership rules were the expectations for students to mentor new members, and to create a community where anyone would feel welcome to pitch their creative ideas. These remain priorities today.

Nick Monacelli, '07, successfully pitched a newscast with student anchors and reporters. "It was incredibly rewarding for all of us to work on something our classmates saw and appreciated, and it ultimately helped solidify my career," he said. Monacelli is an anchor and special projects reporter at KXTV, the ABC affiliate in Sacramento, California. O'Kelly is proud of what the students have accomplished, often pushing themselves beyond their comfort zone with creative and challenging productions such as WCKS and GVTV covering Campus Life Night live from the Fieldhouse. In 2013 he re-established Grand Valleys involvement with the Michigan Association of Broadcasters and showcased student talents. He entered some of their work into the annual MAB statewide student competition. Grand Valley garnered eight student awards in 2013.

Beyond the practical applications for students to gain experience beyond the classroom, student media has also provided opportunities to engage students with the larger community. News teams have covered the opening of the Mary Idema Pew Library Learning and Information Commons and other campus events. WCKS sponsored a clothing drive for the Grand Rapids Home for Veterans. GVTV has provided West Michigan families of deployed military personnel an opportunity to record video greetings for the holidays. The Lanthorn consistently publishes editorial support for these efforts.

While the future of media is impossible to predict, OKelly has some specific thoughts. Whats going to be important is the need for story tellers, he said. Media consumption today is no longer an I talk, you listen media world. It is much more interactive and there's no going back.

Beery reflected on the many changes and trends in the newspaper industry and how they are mirrored at the Lanthorn. Beery said: "Ongoing innovation in all student media will need increased planning and support. I believe the best days are still ahead, with great opportunities to enhance the synergy between the Lanthorn, GVTV and WCKS."


Page last modified December 13, 2017
Report a problem with this page