When it was released in 1971, Led Zeppelin’s iconic hit “Stairway to Heaven” became part of a proverbial soundtrack to a generation, driven by a powerful melody, stirring lyrics and a strong harmonic foundation: the immediately recognizable lead chord progression.

Perhaps that chord progression sounded familiar to members of a lesser-known band, Spirit, who wrote a song, “Taurus,” with a very similar sound two years earlier. The songs were similar enough that the heirs of Spirit founder Randy California have filed a lawsuit over the songs in Pennsylvania.

The 2014 lawsuit over the similarities between “Taurus” and “Stairway to Heaven” is one of many between artists who think another artist has used their intellectual property in a new song.

Pop artist Sam Smith recently agreed to give co-writing credit to rock superstar Tom Petty over similarities between Smith’s hit “Stay With Me” and Petty’s “I Won’t Back Down.” Robin Thicke and Pharrell Williams, who performed 2013’s massively popular song “Blurred Lines,” must pay $7.3 million, a judge ruled, for infringing on the copyright of Marvin Gaye’s 1977 track “Got To Give It Up.”

Kurt Ellenberger, professor of music, said the problem with some of these lawsuits is that they are litigated over the parts of a song that can’t be copyrighted.

He said a piece of music that falls into the pop, rock, country or folk genres is made, essentially, of four parts: the chord progression, which is the harmonic foundation for the song; the melody, which is the unique musical part of each song that’s comprised of a succession of single pitches; the lyrics; and the rhythmic elements. 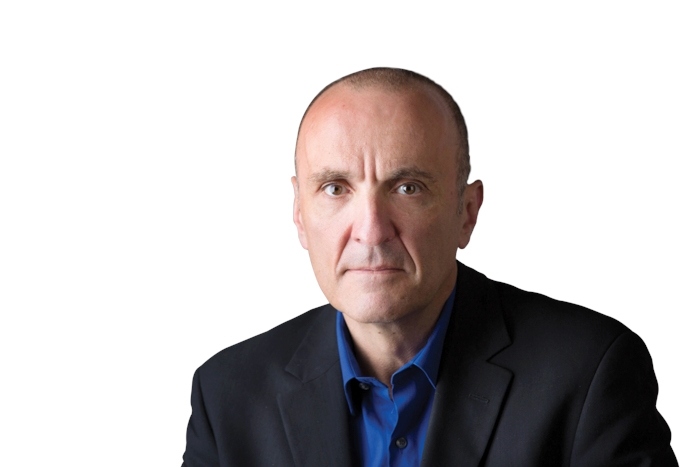 Professor of music Kurt Ellenberger contends that some lawsuits over music are litigated over the parts of a song that can't be copyrighted.

“Pieces of music are like houses in a lot of respects,” Ellenberger said. “They can look very different on the outside, and can be very unique and different from one another, but behind the walls and paint, most of them share a very similar structure and foundation. The basic model on which they are built is nearly the same.”

Those foundations are the chord progressions, and while any number of chords could theoretically be put together, Ellenberger said that acoustics dictate there are only 48 chords in 12 keys that are pleasing to the human ear. Most, if not all, of today’s acoustically pleasing chord changes were systematically defined by Johann Sebastian Bach in the early 18th century, he said.

“Bach was really the father of music, he figured out how those chords worked together,” Ellenberger said. “Mathematics dictates that there’s just a fixed number of chord progressions that can go together, and that number is even more limited in popular music, which is why chord progressions can’t be copyrighted.”

Ellenberger said the protected part of a song is the melody and the lyrics, not the harmonic foundation, which is why so many songs can be performed using identical chord progressions. A simple Google search for the phrase “same four-chord songs” yields nearly 800,000 results, and includes pages titled “73 songs you can play with the same four chords” and YouTube videos showing artists doing exactly that.

The problem specifically with the “Blurred Lines” lawsuit, Ellenberger said, is that the ruling came down to the ears of a jury, who based the ruling on the general feeling of the song, rather than understanding the difference between the harmony and the melody.

Ellenberger said most listeners hear songs as a single entity unrelated to other songs, and they are unable to hear the similarities at the foundation. This leads to a lot of duplication in certain genres 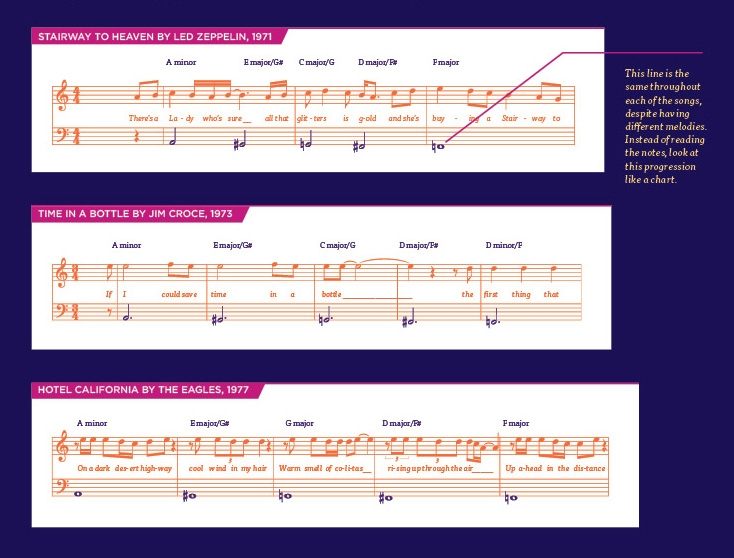 Check out the chromatic bass lines of Stairway to Heaven, Time in a Bottle, and Hotel California. Even though the melodies are drastically different, pay attention to the bottom line on each set of notes. In each song, the five note progression follows the same pattern, although the keys are different. It’s this pattern that helps you hear the similarities in each of the songs.

“If lawsuits over copyright protections in music continue to go this direction, it’s going to get really hard to release an album,” Ellenberger said. “Pop and country artists will particularly be hit hard if the rhythm and chord structures of the song are determined to be copyright protected.”

In the world of classic rock, Spirit and Led Zeppelin are in a lawsuit, but those two songs are far from the only ones in the genre to share the same sound. Another mega-hit, 1976’s “Hotel California” by the Eagles, shares the same arpeggio, as does “Time In A Bottle” by Jim Croce as well as chord progressions from Ray Charles and Jethro Tull.

Using the same harmonies with different tempos and melodies is nothing new, Ellenberger said. All of the classic rock songs listed above share construction with Frédéric Chopin’s “Prelude in E-Minor,” a piece of classical music that was written in the 1830s.

The reason there are limits on the number of chord progressions is based on the science of acoustics, Ellenberger said. The human brain is naturally programmed to identify sound waves that are complementary and simple, rather than those that are complex and incompatible.

“If I sit down at a piano and play you a series of chords that you’ve never heard before, but stop before the last note, you’re going to inherently know what note is next. It’s a natural reaction to sound,” Ellenberger said. “Our brains are always making assumptions about what sound will be next based on simple ratios. Sound is just a series of waves, and our brain is always looking for the most logical and simple next step to a series of sounds. It’s why some chord progressions work and others don’t.”

He said the structural basis of pop, country, rock and folk songs is apparent when understanding how many songs are structurally the same before melodies and lyrics are built. Modern songs are produced by experts who know what makes an ear-catching tune, and are enlightened about what works and what doesn’t.

“If you go to Nashville, the home of country music, they’re producing songs at an extremely high level, where they know what kind of song is going to work for a particular artist,” Ellenberger said. “They know that a certain tempo and melody will work. But if you laid a dozen modern country songs end-to-end, you would see that they have a great deal in common, many would have the same harmonic structure, and you could literally swap parts between the songs and it would make little difference to the overall presentation — you cannot do that with a Beethoven symphony, which is a more complex and organic process of composition.”

While Ellenberger said that most modern songs share similar architecture at the base level, he said that technology has closed the gap between professional producers and amateurs at home.

“If lawsuits over copyright protections in music continue to go this direction, it’s going to get really hard to release an album.”
Kurt Ellenberger, Professor of Music

“With computers and high-quality microphones more widely available than ever, it’s easier for amateurs to produce studio-quality music. That’s because computer users now have access to audio editing software that used to only be available to people with a studio and a producer,” Ellenberger said. “Part of that access is the naiveté of the amateur — and I’m not saying this in a derogatory manner at all — they’re making music that sounds good to them, without knowing that they’re duplicating the same basic chord progressions and other concepts that have been around for hundreds, if not thousands, of years.”

Ellenberger said most listeners hear songs as a single entity unrelated to other songs, and they are unable to hear the similarities at the foundation. This leads to a lot of duplication in certain genres, he said.

“This is not necessarily a bad thing — if it gets too complicated, it’s no longer pop or country or folk, and the audience rejects it, so it has to re-use and recycle,” he said. “Duplication is inevitable, but it’s important, from a legal perspective, to be able to distinguish between what can be protected and what can’t.”


Page last modified January 23, 2017
Report a problem with this page