Somewhere beneath the cool blue waters of the Great Lakes, squishy globs of cement-grey sediment may hold the secret to future treatments for certain pediatric cancers and other diseases.

That’s the hope, at least, of Mark Luttenton, a researcher at Grand Valley’s Annis Water Resources Institute in Muskegon. Luttenton and researchers at the University of Oklahoma, University of Illinois, and University of Texas are collecting fungus samples from the sediments on the bottom of the Great Lakes and testing them for their medicinal properties. The results, so far, have been astonishing, Luttenton said.

“What we are seeing in these early trials far surpasses what I thought we’d see at this point,” Luttenton said.

The concept behind why Luttenton and the team are testing Great Lakes fungi is relatively simple: fungi have long been known to frequently have antibacterial or antimicrobial properties. One of the greatest weapons against infection, penicillin, comes from a fungus.

Luttenton said that when fungi grow on the floors of the Great Lakes, they are actively spreading fiber-like growths called hyphae, but they have to fight off bacteria, too. The goal of the research is to see what chemical compounds in specific fungi cause other cells to die, and what kind of cells they’re good at killing.

"To work on a project with this high probability of finding something that could be life-changing is spectacular."
— Mark Luttenton, AWRI researcher

Going from an unremarkable blob of soggy muck to an experiment-ready sample in a lab is no small feat. Luttenton goes out on a boat specially equipped with a tool called a ponar sampler. It’s basically a spring-loaded scoop that’s designed to stay open until it hits the bottom of the lake, then close and catch sediment and dirt.

Once a sample is obtained, Luttenton takes the top layer of sediment and separates it from the bottom material. Then he ships the sediment, and the fungus living inside it, to his colleagues Robert Chichewicz, a Grand Valley alumnus from 1994 and researcher at the University of Oklahoma, and Andrew Miller, a mycologist at the University of Illinois. Chichewicz and Miller isolate the different fungi from the samples, grow them into viable lab samples, and extract DNA from each of them. 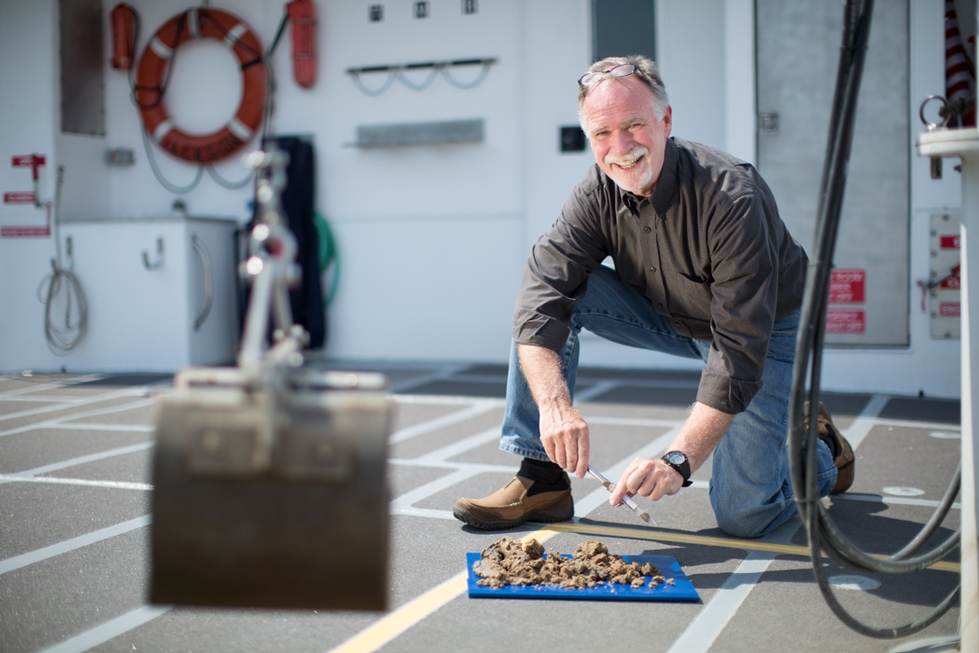 Once the DNA is extracted it is sent to a database that stores DNA signatures for different types of fungus. Once the fungus is identified, the researchers move toward testing for medicinal properties — but the identification has value as well.

“This is only the second or third fungal study of the Great Lakes ever done,” Luttenton said. “Out of just 50 samples from southern Lake Michigan in 2014, we found 709 different isolated fungal organisms. That’s absolutely extraordinary. The chance to find organisms that are really novel, medically speaking, goes up dramatically with that kind of success in the identification stage.”

Luttenton said just one year of sampling has increased the known taxonomies of fungi in Lake Michigan by five times. “We even found the same classification of fungi as the kind of mushroom you’d find on your pizza, and certainly didn’t think we’d find that in Lake Michigan,” he said.

Once individual fungi specimens were isolated, researchers produced an extract of each and tested their medicinal properties against standard cancer cell lines.

Luttenton said the early results were shocking. Of 465 extracts tested, 65 percent of them showed some antimicrobial activity. To find the best possible compounds, researchers dropped the concentration of the extracts by tenfold, then tested again.

“With just two microliters of extract being tested, a total of 69 of the 465 samples showed strong anti-cancer properties, 48 of which demonstrated non-selective potential and 21 showed high activity against specific cancer lines, like breast cancer, pediatric cancers and other specific varieties,” Luttenton said.

“The structure of these fungi are very novel for a biological molecule,” Luttenton said. “It goes through the cell wall very easily and shuts down the mitochondria, which is a very abnormal trait.”

Initial results are promising but Luttenton said there is a lot more work to do before the fungi will be in any treatment soon, though trials on mice are starting at the University of Texas.

“Given the level of activity we’ve seen in the isolated samples, there are a lot of potential ways that this could be used in the future,” Luttenton said. “When I got into science, I thought the best I could hope for was to make some small contribution to science as a field, and the scope is a bit smaller studying fish and plants and algae, but to work on a project with this high of a probability of finding something that could be life-changing is spectacular.”


Page last modified July 31, 2015
Report a problem with this page