Among the bluegill sunfish that live in Lake Opinicon in Ontario, Canada, strong parental male fish tend to dominate their underwater nests with an iron fin, fighting off other males and competing for breeding with a vengeance.

But variety in the species’ gene pool may rest on the backs of smaller, sneakier and more clever males who have a variety of tricks up their gills to keep their genetic lineage alive against tough odds.

The bluegill is one of many types of fish that use alternative reproductive tactics, and a Grand Valley researcher who studied genetic expression differences between various types of male fish said she has a good idea of how the smaller, more clever fish outcompete the bigger, stronger males in a breeding population.

“The differences between the types of males are distinct, and the ways they breed depend on specific tactics,” said Charlyn Partridge, lead researcher on the bluegill study and assistant professor at the Annis Water Resources Institute. 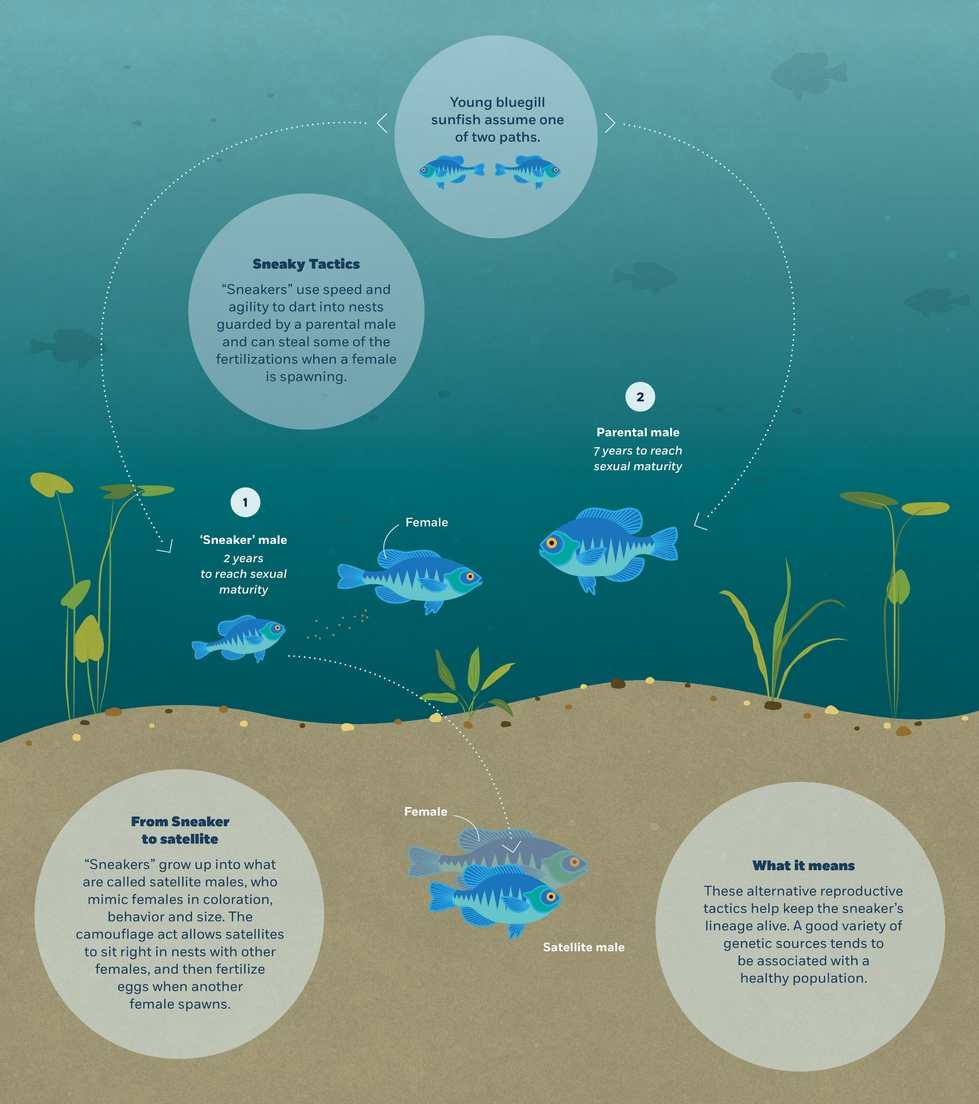 When bluegill sunfish males are young, they assume one of two paths, Partridge said. One path will lead the fish to behave in a traditional parental male manner; those fish sexually mature at about 7 years old.

It’s the other, which researchers call the cuckolder male path, that leads to male fish who use alternative reproductive tactics to keep their distinct genetic lineage alive. When cuckolder fish are 2 years old, they reach sexual maturity, yet are still quite small compared to physically developed parental males.

Partridge said they are called “sneakers” at that point. “They use their small size and quickness to dart in and out of nests that are occupied by a parental male and a spawning female, and can beat the male to the eggs, sneaking their way to a successful fertilization,” she said. “It’s a technique that is used by fish all over the place, but the sneaker male bluegills are quite adept at it.”

Yet sneaker males can’t use their small size and speed forever, they then rely on their cunning instincts. As sneakers grow up, they use another trick to ensure their lineage survives. They transform into what Partridge called “satellite” males, males that look like females in size, coloration and behavior traits. This camouflage act allows satellite males to camp in nests with parental males — completely undetected — until another female comes to spawn, and the satellite will attempt to fertilize the eggs instead of the parental male.

“It’s fascinating behavior, and it’s been seen in different species of fish,” Partridge said. “What we’re trying to find out is why certain fish behave the way that they do through RNA sequencing.”

The sequencing was done after sampling brain tissue from each group of fish with particular behavior sets, and comparing it against a database of other fish that have been known to use alternative reproductive tactics.

Partridge said the most striking discovery in sneaker males is they showed a higher level of gene expression differentiation than either the satellite males or the parental males. She hypothesized that the gene receptor may be important for increased spatial working memory — a trait that’s critically important to that kind of alternative behavior.

“Having the enhanced capacity for spatial awareness is a great skill for a fish whose success at reproduction is based on his ability to sneak in and out of small, tight spaces very quickly,” Partridge said.

The research is important, Partridge said, because it provides a possible genetic link to different behaviors between groups of fish colonies, and a genetic reason that alternative reproduction behaviors exist.

“It’s because they work,” Partridge said. “You’d think over time, dominant and larger parental males would have a monopoly on breeding and the alternative breeding behaviors would evolve out of a population.”

Partridge said the genetic variation of the population is important because, generally, the more phenotypes exist in a population, the healthier the group will be.

“The increased success of the sneaker fish helps keep a wider gene pool for these populations of fish,” Partridge said. “We hope that identifying these gene expression patterns helps other behavioral ecologists in the future as they study these mating patterns and behaviors.”

“The success of the sneaker fish helps keep a wider gene pool for these populations.” Charlyn Partridge


Page last modified May 23, 2017
Report a problem with this page