Students, faculty work to save a vanishing species

One out of three bites of food, or one-third of our diet, is linked to the direct work of the honeybee.

Fruits, vegetables, nuts and other crops rely on bees to pollinate them for production of quality produce.

But honeybees, a species native to Europe, are mysteriously disappearing.

“Colonies are collapsing and dying, and scientists don’t really know why, which is the scary part,” said Jonathan Engelsma, associate professor of computing. 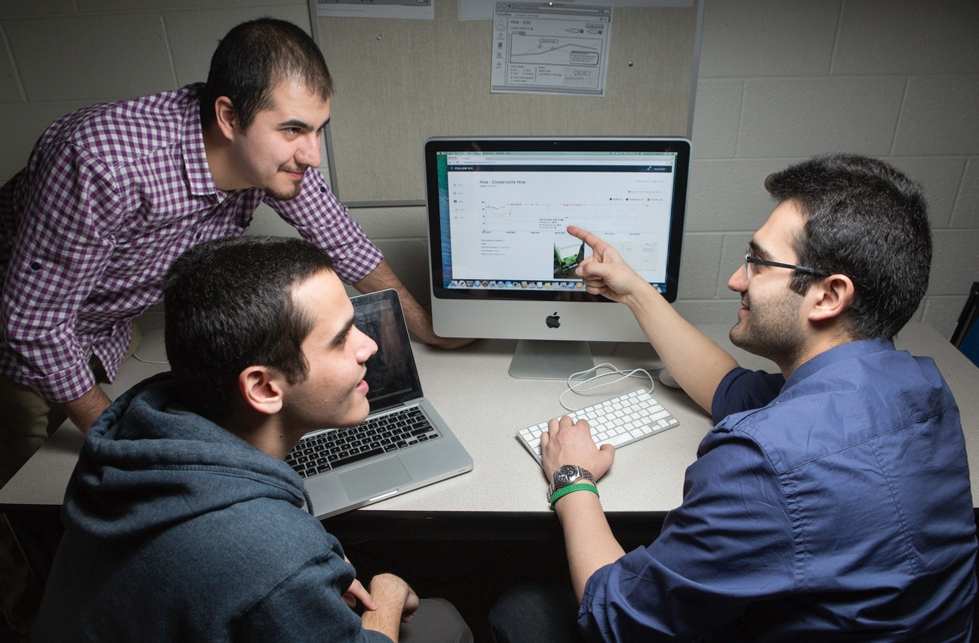 He said the one-half inch insect has had its fair share of problems over the centuries, and there are a lot of theories that try to explain why honeybees are now suddenly dying. Engelsma said he believes the problem is a combination of interrelated issues such as destroyed habitats, new pests and diseases, and low diversity of good nutrition.

Engelsma, a hobby beekeeper who manages 50 hives from his family’s orchard in Walker, and Anne Marie Fauvel, affiliate professor of liberal studies, are collaborating with Bee Informed Partnership to build a tool that has the potential to connect honeybee keepers with researchers across the country. BIP is a national project that aims to decrease winter mortality of managed honeybee colonies by helping beekeepers keep colonies alive through surveys and data collection.

Fauvel said the number of honeybees that survive the winter decreases every year. “This is serious because the bees that survive are the ones that continue a colony or establish new ones in the spring,” she said. “Last year, 36 percent were lost. Twenty years ago, it was only 8 percent.”

A biologist who formally studied moose, Fauvel remembers the first time she interacted with honeybees.

“I visited some neighbors who started to raise honeybees,” she said. “They opened up the cover to the hive, and there was an ah-ha moment; it was love at first sight.”

That was six years ago. Since then, she has brought two hives to the Meijer Campus in Holland, where the student beekeeping club takes care of them, and hopes to install hives at the Sustainable Agriculture Project on the Allendale Campus this spring.

When Fauvel brought the hives to campus, she asked John Farris, professor of engineering, if he and his students could build a scale to be placed under the hives to track their weight, which indicates when the bees are producing honey — called the honey flow — and whether the colony is growing or shrinking. The data went to HoneyBeeNet, a NASA project that collects data to superpose satellite images of the greening of the Earth with weight increases of hives that correlates with the blooming season. The data is then compared with the blooming time of previous years.

Fauvel’s research and passion for beekeeping brought her to several conferences, including one in Quebec where she met Dennis vanEngelsdorp, a leader of BIP and research scientist at the University of Maryland.

“HoneyBeeNet was in the process of merging with BIP, and was still collecting data from their scales by hand, so I thought, ‘Let’s use the computer system our students created for the hives in Holland and modernize the system,’” she said.

Fauvel enlisted the help of Engelsma and his computing graduate students to build a Web application where honeybee keepers around the country can register a hive, assign it to a scale and track daily cycles such as weight, humidity and temperature. The website was built in the Mobile Applications and Services Lab in Grand Valley’s School of Computing and Information Systems. Engelsma and Fauvel received a $22,140 grant from BIP in February.

“Our hope is that over time, the data collected on the new Web application will become a research tool for scientists to use to discover patterns that could shed some light on this significant problem,” Fauvel said.

Their goal is for the Web application to become a nationwide effort. “Someday, we hope any beekeeper can purchase scales and hook into this bigger network of scales,” she said.

Engelsma said there’s a silver lining to it all because beekeeping as a hobby has become wildly popular.

Fauvel said, “It’s not the commercial beekeeper who has a thousand hives who’s going to make a difference, but it’s the thousand people who want to start one or two hives that will save our honeybees.”


Page last modified June 19, 2014
Report a problem with this page