Living in cities and suburbs often means easy access to recycling facilities or curbside pickup services, but trying to reduce, reuse and recycle in rural areas can take much more time and effort.

A new partnership between Grand Valley’s School of Engineering and Hastings Township, a rural community about an hour southeast of downtown Grand Rapids, is hoping to bring sustainable, portable recycling stations to underserved rural communities.

Nicholas Baine, assistant professor of engineering, has been working with township officials to build a one-of-a-kind prototype recycling center that can be trucked to remote locations and operated without needing access to the power grid.

The prototype currently sits in the parking lot of the Hastings Township Hall, and is essentially an old semi trailer, with some important modifications. Windows and doors were cut into the sides to allow for recyclable materials, and it has four solar panels installed on the roof. The panels allow the center to be completely self-sufficient so they can be placed in spaces where there are no power lines. 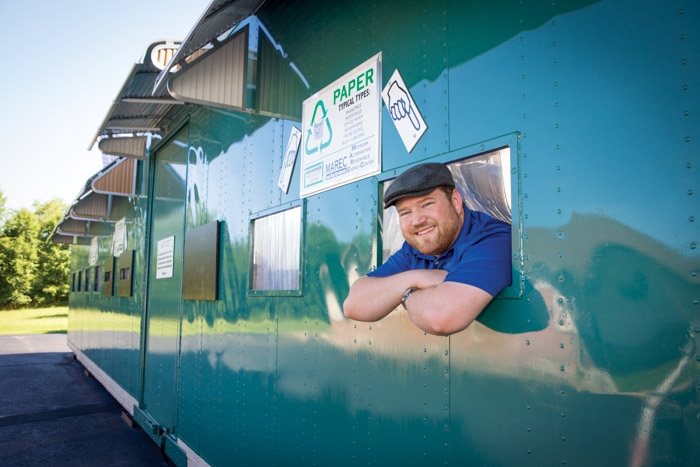 Nicholas Baine, assistant professor of engineering, is inside a solar-powered recycling center that can be trucked to rural locations.
photo by Bernadine Carey-Tucker

“The solar panels send power through a system to the bank of batteries inside the unit, which allows lights and security systems to continue to work at night or on cloudy days,” Baine said.

“If these were to go into rural locations throughout the county, it would be cost prohibitive to send a maintenance person out to each location just to check and see how full the recycling bins are on a regular basis,” Brown said. “Having the stored solar power on board will allow us to go online and look at a webcam inside the trailer to determine when bins need to be emptied rather than driving to a site that could be a long distance away just to check it out.”

The solar cells send power for storage to a bank of post-vehicle-application lithium-ion batteries, which are commonly found in newer hybrid and electric vehicles. Once the batteries can’t hold enough of a charge for a vehicle, they can be repurposed for power storage, which doesn’t require as much current as vehicles do. Baine said some of the used batteries in the prototype recycling center came from hybrid bus battery packs that couldn’t meet the needs of the buses any longer.

While Hastings Township doesn’t need more than one or two of the recycling centers, Brown said he’s identified roughly a dozen sites throughout rural Barry County that could use the portable recycling stations.

“We’re not always going to have locations right next to the township hall where we could plug into an electrical circuit, which is why the solar power and power storage capabilities become so important,” he said. “We’re interested in this concept that would improve rural
recycling services while driving down costs in places where curbside isn’t available or practical.”

Building and testing the prototype unit took about a year, and was completed in August. Because it’s a prototype, the initial center cost about $35,000 to make, but Brown said future versions should be able to be built for less than half that amount.

“The solar panels send power through a system to the bank of batteries inside the unit, which allows lights and security systems to continue to work at night or on cloudy days.” Nicholas Baine, assistant professor of engineering

The GVSU portion of the project has been funded by the U.S. Department of Transportation’s Research and Innovation Technology Administration University Transportation Centers program, through the Mineta National Transportation Research Consortium with matching funds provided by Grand Valley. Grand Valley’s Michigan Alternative and Renewable Energy Center, or MAREC, was also part of the project. MAREC program manager Kim Walton worked with the township for three years in the planning stages of the project and worked with a solar installer to design parts of the system. MAREC will collect data on the unit.

Baine said that the recycling center, as it’s currently designed, will require minimal maintenance and can run autonomously for up to three days without sunshine.

“The prototype we’re building in conjunction with Hastings Township could have big implications for energy storage solutions for rural applications in the future,” Baine said. “We’re recycling batteries to help other people recycle their household waste. I think that’s a pretty cool concept.”


Page last modified October 30, 2015
Report a problem with this page