A survey of first-year Grand Valley students showed the biggest barrier to receiving a Human Papillomavirus (HPV) vaccine was moral or religious beliefs, or a perceived promotion of sexual behavior, according to graduate physician assistant researchers.

Jamie Phillipich and Margie Webb surveyed 1,000 incoming students last fall as part of their master’s research project. They assessed the influence media has on the perception of HPV and vaccine compliance, and presented their findings at the Annual American Academy of Physician Assistants CME Conference in May. 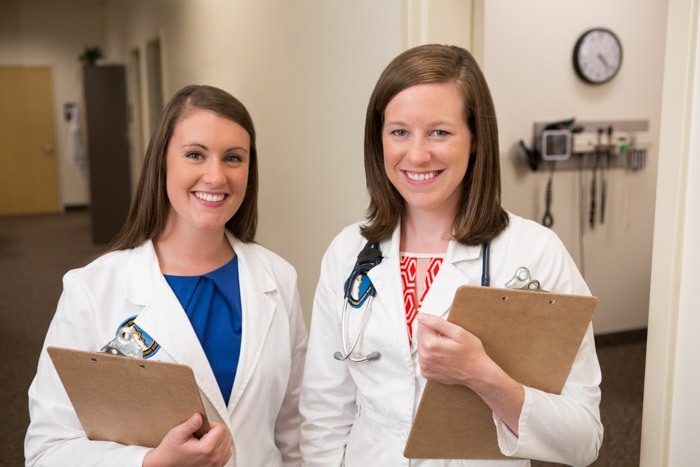 The HPV vaccines are commonly recommended for children ages 11-12 to protect against cervical cancers in women, and genital warts and other cancers in men.

Phillipich said she and Webb chose incoming first-year students in 2013 as that population was among the first to receive the vaccines when it was introduced in 2006 for girls and 2009 for boys.

The researchers said it’s important as future physician assistants to understand where their patients are receiving information to be able to give informed recommendations.

“This is the first vaccine that we can say protects against cancer,” Webb said. “As providers it will be important to impart the most recent guidelines on patients and their families so they have the information they need to make informed decisions.” Webb and Phillipich said they wanted to focus on women’s health for their master’s thesis. Phillipich earned a bachelor’s degree in human physiology from Michigan State University, Webb earned a bachelor’s degree from University of Michigan in neuroscience. Both are expected to graduate in December.

They are finalizing their findings for publication.