When Jake Czerwinski, a mathematics major, and his roommates decided not to re-sign the lease on the house they were renting last spring, he started thinking of places to live for the summer.

He had just read an article about “mobile living” — people converting vehicles to ultra-small, driveable homes. He drafted plans and did some research, bought a van and added a heater, solar panels, basic water service and other improvements.

He built a place to live, and learned some important life lessons along the way. Grand Valley Magazine asked him how he does it, what he learned, and where he’s going from here.

Czerwinski graduated in April with a degree in mathematics, and plans to apply for officer school in either the Air Force or the Army. He hopes to pursue a future in pararescue.

How do you accomplish the day-to-day tasks that usually require more space, like washing, cooking, eating?

It would be a lot more difficult if I didn’t work where I did; I work as a machinist at a shop in Walker, and they’re letting me park there. There’s a shower and a small kitchen, so I eat lunch pretty much every day at work, and sometimes I just heat up something in the microwave in the van. I have friends whose houses I can stop by if I need to. I’ve also got a little sink with a five-gallon hand-pump so I can brush my teeth and wash my hands.

The van is your base of operations, but it sounds like you’re supplementing that with some permanent facilities you need.

I’m never really “home,” so to speak, during the day, I’m either at work or at class. I do laundry at the laundromat, I shower at the YMCA. I don’t really eat out a lot — and I’ve found myself eating a lot less, too. It’s not that I’m not eating enough, I just only eat when I really need to. It’s actually good. I keep snacks around like nuts and pretzels and stuff, plus sandwiches and cereal stuff in the fridge at work.

Tell me what you do for electricity in the van.

I started going to college for mechanical engineering, so I know enough to get around, and what I don’t know I figure out. I have a solar panel on top of the van and it’s wired to a big, deep-cycle battery. It’s enough to run a fan in the summer, charge my phone and laptop, and run six outlets. I’ve got lights hooked up, all that stuff. It has plenty of power.

How’s it working out? Are you going to do this for a lot longer?

It was super cool when the van was mobile, but the transmission is having problems so it’s a bit more boring right now. I do have another minivan that I use to commute to Grand Valley, so I can get where I need to go, I just don’t have a home that’s mobile like I used to. I plan to live in it through the summer at least, after that, I’m not sure. About 18 months total or so. 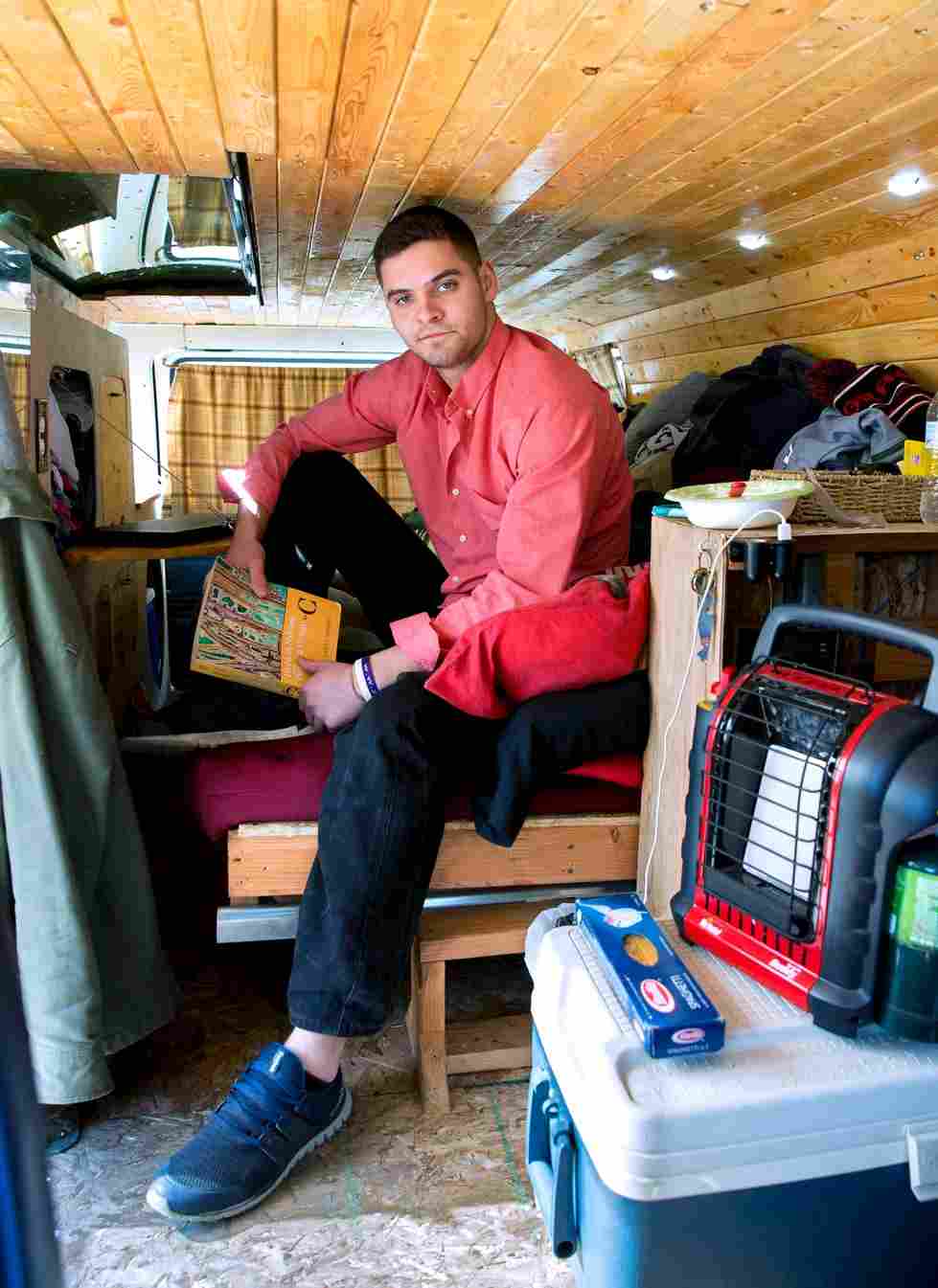 What did your friends and family have to say about this? Did they think it was cool or did they think you were crazy?

My parents definitely were not on board to start; they thought it was a stupid idea. But when they saw what I was doing and what I was planning, my dad got on board and thought it was cool, but my mom worried and ended up sending me suggestions on how to make it as safe as possible. So they’re not all the way on board but they’ve come to terms with it.

You must have saved some money on rent throughout this process.

I bought the van for $1,300, and it cost a few hundred in gas to drive up from Florida, and I’ve put about $2,000 into it to make it livable. I’ve also had to put some money in for mechanical repairs, but it’s definitely less than what I would have paid for 18 months of rent. I’ve taken the extra money and put it toward school.

This is a unique experience. What have you learned from this?

I have learned that we all think we need more than we do. You see people with such extravagant houses and cars and toys, and then you see people who are hurting, it just seems like we could all take a little bit less and give a little bit more. I think this really shows that most of us don’t need as much as we think we might.

One of the most important things that I realized is that a lot of other people made this possible for me. I have a lot of people to thank, my friends and my co-workers and my family, whether it be advice that was given, or a couch to sleep on or just support. That was the cool thing: I could do a project like this by myself but have so many other people involved.


Page last modified May 22, 2017
Report a problem with this page