In 1968 Ann Dilley’s mother gave her a little white box that had been passed down through multiple generations within her family. Inside the box were a bloodstone and seven uncut cameos, which are made from multi-colored conch shells or semi-precious gemstones called agates.

While previous holders of this family heirloom stored it away, Dilley was determined to use the materials to make something meaningful and useful. This sparked her interest, and future passion, in jewelry making and metalsmithing.

Now an 86-year-old art and design student at Grand Valley, Dilley’s more than 35-year journey to hone her craft began by making a necklace with the contents of her family’s box while taking classes with a West Michigan jewelry artist in the basement of the artist’s home.

“It’s not a hobby, it’s more of a passion,” Dilley said. “I think as one marches along in life you need a passion because as you get older, a lot of things happen that aren’t particularly pleasant. This is what keeps me going. It’s just a total pleasure for me.”

Coming from what she calls “a long line of squirrels” who have collected and stored many trinkets over the years, Dilley finds inspiration for her work through recycled family treasures and things found in nature.

“I’m a collector. I pick up rocks and stones. In the 1920s, both of my parents and my grandfather smoked and all took their smoking paraphernalia very seriously. So, I’m recycling that into jewelry,” Dilley said.

Her love for crafting jewelry from family heirlooms doesn’t stop there. She has also crafted broaches for her two daughters made from old sterling silver handles and wax flowers used in 1927 for her mother’s wedding bouquet. Even a pair of old cufflinks, previously worn by Dilley’s husband, Newt, have been transformed into a pair of earrings, and a handful of her grandmother’s thimbles are now a necklace.

Dilley’s pursuit of an arts education began at Connecticut College in the 1940s. While initially majoring in art, she earned a degree in English literature in 1950. In 1952, the Dilleys moved to Grand Rapids, where they currently reside. 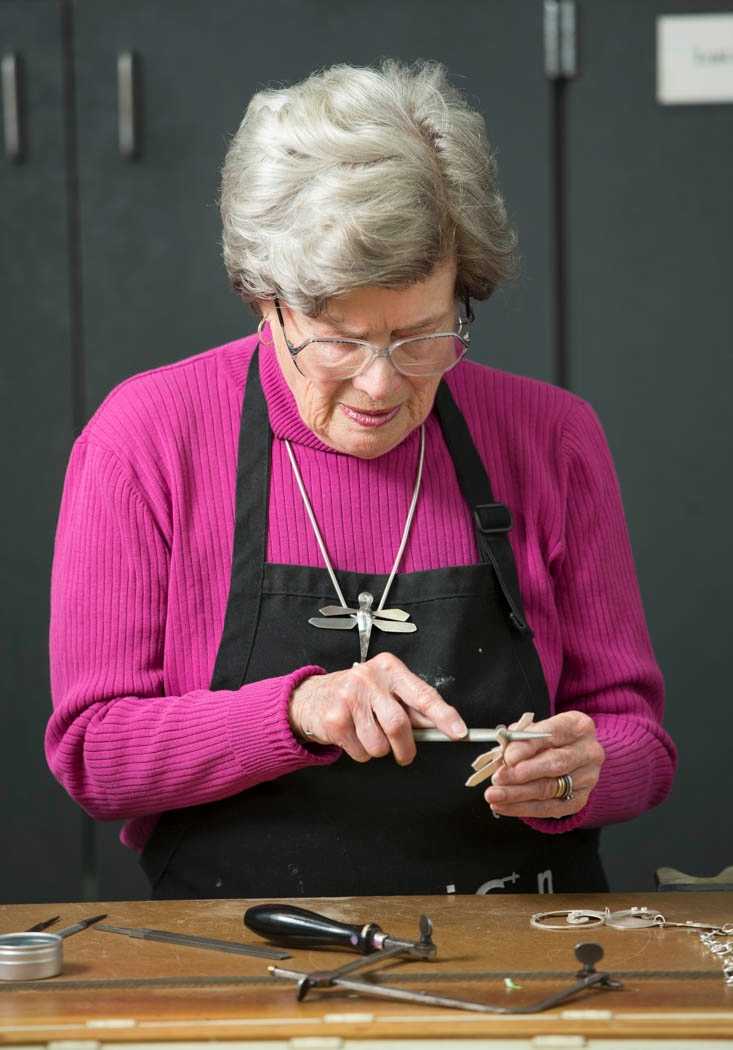 Seley said more than just a teacher-student relationship has developed between the two over the years.

“Ann has become one of my best friends,” Seley said. “She is a wonderful example of continuing to learn and being active as one ages. She is bright, well-traveled, a voracious reader and risk-taker with ideas and materials that are surpassed by no other. Whenever I see a graduate of the program they always ask if Ann is still there, and I say, ‘Of course!’”

Dilley admitted that students are, at first, skeptical when they see an 86-year-old woman in class, but they eventually see her in a different light.

“Gradually they stop not calling me anything and then finally I’m Ann, another student,” Dilley said. “I think in some ways there’s at least one thing that I give to them in return for their friendship and that is showing them there’s life after 20, 30, 60, 70 and 80.” 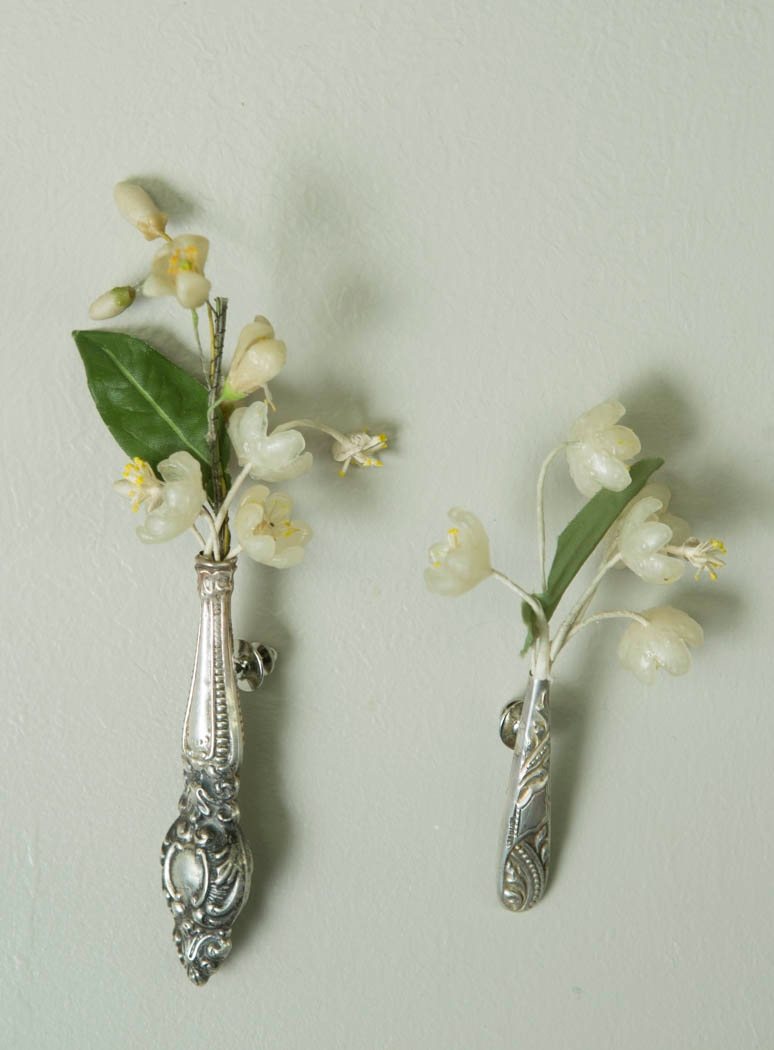 Having worked her way through the entire jewelry and metalsmithing program, Dilley now continuously enrolls in the two most advanced courses. She needs a special permit signed by the chair of the Art and Design Department to enroll since she is a non-degree seeking student.

To celebrate her passion for metalsmithing arts and commitment to lifelong learning, Dilley’s family established the endowed Ann Dilley Jewelry/Metalsmithing Scholarship in her name as a present for her 86th birthday in 2014. The scholarship gives preference to non-degree seeking or part-time students in the jewelry and metalsmithing program. 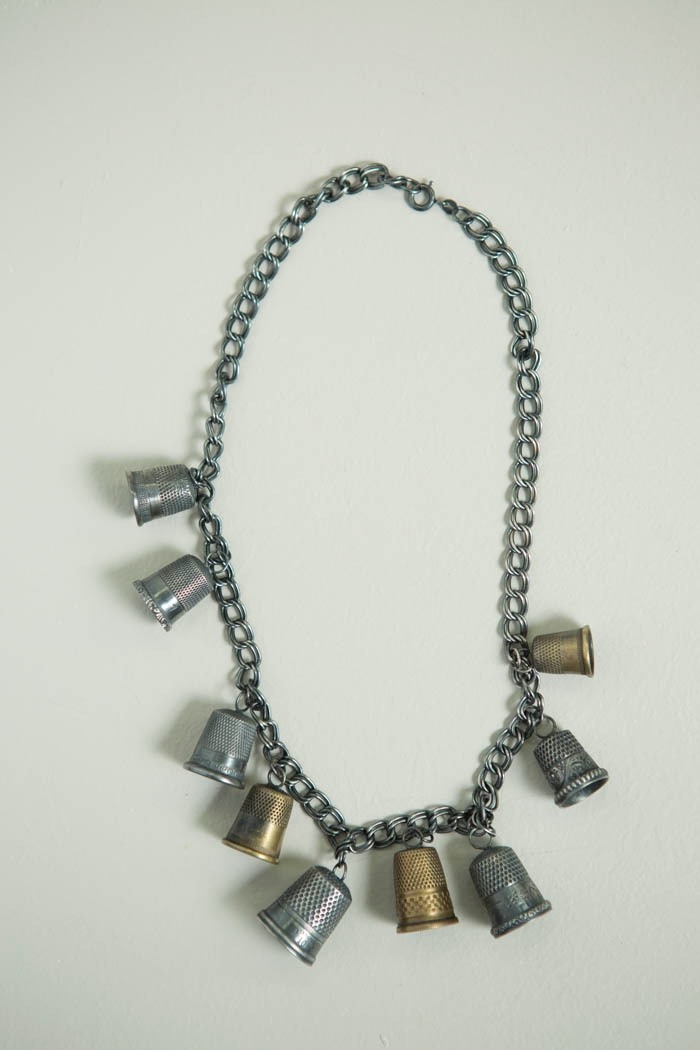 Thimbles that once belonged to Dilley's grandmother have since been transformed into a meaningful necklace.

“I was very proud, pleased and touched that my family chose to do that. I cried at the time,” Dilley said. “I think the struggle to achieve a degree is monumental now and I think this will at least give more than one student an opportunity to take the classes and have a future.”

Dilley also contributes to the Hillman-Dilley Fund, which is used to financially assist jewelry and metalsmithing students interested in attending conferences in the field.

Determined to continue her passion as long as possible, Dilley said she plans to attend Grand Valley until someone takes away her car keys, which she said won’t be any time soon.