At age 11 Robert Robins climbed to the top of Mt. Whitney, the highest summit in the contiguous U.S. with an elevation of 14,505 feet. In his mid-teens, Robins ran with the bulls in Pamplona, Spain, during the annual festival of San Fermi — for the first time. He returned about a
dozen years later to do it again.

Robins credited his father with instilling in him a love of the outdoors and a sense of adventure. 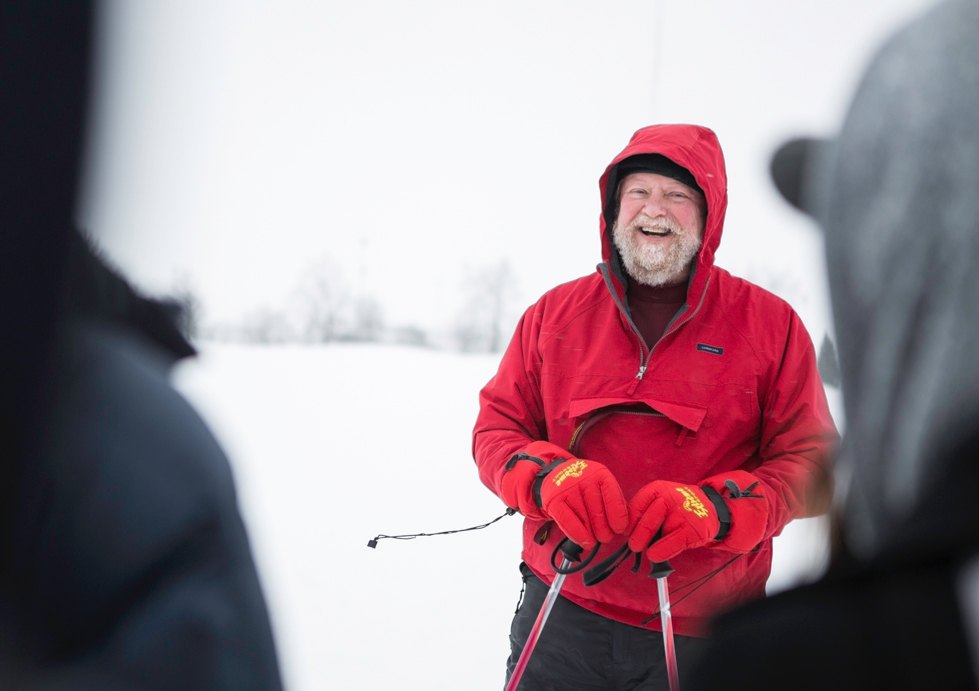 Robert Robins encourages his Adventure Tourism students to try news things, such as snowshoeing, pictured here at the Meadows.

“My father served for 33 years in the Navy and our family moved almost every year to posts in California, Florida, Texas and in Europe,” said Robins, associate professor of hospitality and tourism management. “While stationed in California, he was quite the mountaineer and shared that passion with me. As one of the many military fathers involved with my Boy Scout troop, we were provided access to many things other troops didn’t have, like the base survival course.”

By his late teens, Robins and his family had visited 21 countries before his father was reposted to bases stateside. It’s no wonder that a sense of wanderlust and search for the next big adventure has shaped Robins’ life. 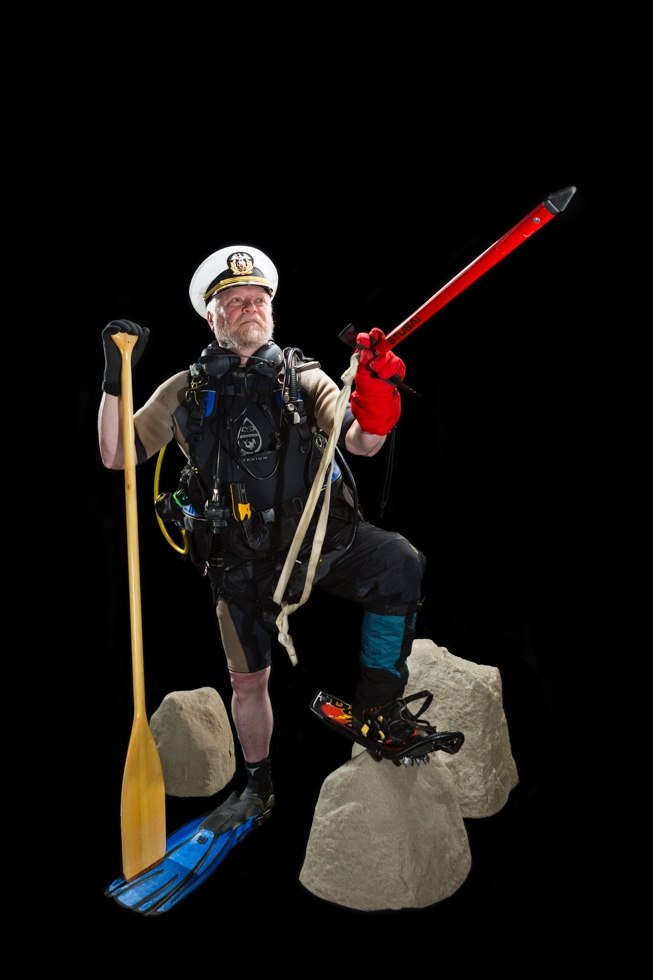 Roberts is wearing (or holding):

By his late teens, Robins and his family had visited 21 countries before his father was reposted to bases stateside. It’s no wonder that a sense of wanderlust and search for the next big adventure has shaped Robins’ life.

Despite his accomplishments, Robins often felt a nagging desire to do more. When he turned 40, Robins embarked on what he referred to as “a 10-year, mid-life crisis to tackle things unfinished, or not yet started.”

He earned a pilot’s license and became certified as a technical scuba diver and instructor. He worked to obtain a Master Mariner 100-ton captain’s license in the Merchant Marines and drove tall ships as a relief captain. He has made a dozen skydives, then determined his preference for parasailing because, “I drop pretty fast and found that I like more air time.”

While working on a master’s degree in park and recreation management at Central Michigan University, Robins decided to explore a career in academia. He had already enjoyed teaching CPR, wilderness first aid and oxygen provider classes for the American Red Cross, Divers Alert Network and Emergency First Responders. An introduction to Paul Stansbie, chair of Grand Valley’s Department of Hospitality and Tourism Management, led to an adjunct position in 2008, and a full-time position after completing his degree.

“It was actually my hobbies that got me my first position here, teaching the Adventure Tourism class,” said Robins. “Once I was hired full time I began teaching classes in my career field of hospitality.”

The students in his courses benefit from his encouragement to try new things, as well as his vast experiences, which he continues to expand. At Grand Valley Robins earned a master’s degree in educational technology and is currently in the Educational Specialist in Leadership program. He intends to finish a doctorate in educational leadership at Eastern Michigan University.

“I’m interested in combining educational technology with experiential learning,” said Robins. “Students today are used to handling compact series of information very quickly and in multimedia formats, and I’m able to do that with flipped and hybrid online courses. The way students learn has changed, so the teaching methods must also.”

One thing that hasn’t changed is his thirst for adventure, and with Robins, one never knows what path he might take next. In his “spare time” he is taking photography courses and hopes to pair that with his interest in diving to do some underwater shooting this summer.

“It’s one of those things that may someday lead to something else,” said Robins. “Like being on a ship somewhere and teaching via satellite. That would be a fun experience.”

Behind the Lens video

Page last modified May 20, 2014
Report a problem with this page